'A man more sinned against than sinning'. Is this your reading of Shakespeare's King Lear?

Shakespeare is not primarily concerned with motives; he is more interested in the effects of characters’ decisions and natures. In Kind Lear, he focuses on the tragic consequences of two fathers’ actions, and how events shape their characters. During the course of the play, the others characters also change and grow; some are good and become better, others are bad and become more depraved. Lear and Gloucester are exceptions. Neither is good or bad in a straightforward way. Lear’s characterisation is particularly complex.

Don't use plagiarized sources. Get your custom essay on
“ ‘A man more sinned against than sinning’. Is this your reading of Shakespeare’s King Lear? ”
Get custom paper
NEW! smart matching with writer

He is not a tragic hero with a simple flaw that causes his downfall. Not is his growth a simple movement from ignorance to knowledge. When he emerges from his madness, Lear may have learned a great deal, but doubts remain as to the depth of his understanding. He is infuriating in Act 1 Scene 1, becoming increasingly sympathetic as he suffers himself.

As suggested above, Lear is a complex tragic hero, who excites a variety or responses. Watching his disastrous acts of Act 1 Scene 1, it is not hard to feel that Lear deserves punishment for his folly.

He displays many traits designed to alienate an audience. Quick to anger when displeased and too arrogant to take advice, Lear is blind and irresponsible as a father and ruler. Lear attempts to divide power from responsibility. He is preoccupied with appearances. If he can retain the trappings of majesty without the ‘cares and business’ of ruling, he is content. We realise early how false his values are. It is also possible to see his desire to rely on Cordelia’s ‘kind nursery’ as selfish.

He intends marrying her off in the first scene of the play, but expects to be nursed while he crawls ‘unburdened’ towards death. Lear is both tyrannical patriarch and demanding child at the beginning of the play.

The audience however, does sympathise with this egotistical monarch. In Act 2, Lear’s better qualities are revealed. His hiring of Kent is a sign that Lear inspires loyalty, and his interaction with the Fool shows a more tolerant side to his nature. It also becomes clear that Lear is trying to remain calm even when he feels he is being wronged. In the next scene, Lear recognises that he has behaved foolishly and has treated Cordelia unkindly. As his insight and troubles grow, so does our concern. We begin to share his outrage as Goneril and Regan become more repugnant. There is desperation as well as egotism in his confrontation with his ‘dog-hearted’ daughters in Act 2 scene 4. Gradually, Lear’s rages become signs of impotence, not authority. By the time he rushes out into the storm, our sympathies are more likely to lie with (and do remain with) the beleaguered king.

Lear’s insanity could indeed be seen as a learning process. Lear needs to suffer to improve his understanding of himself and the society in which he lives. Certainly he considers a number of topics he paid little attention to: the wretched condition of the poor, the corrupt justice system, and true necessity. He learns to distinguish between appearances and reality and considers the sufferings of those close to him. Lear also becomes much more self-critical. He emerges from his torment a more humble, loving and attractive character. This way of thinking certainly gives the impression that Lear is indeed ‘a man more sinned against than sinning’.

However, it can also be thought that Lear remains self-obsessed and vengeful. His philosophical enquiries on the heath are punctuated by thoughts of punishing Goneril and Regan. Again and again he returns to the crimes committed against him. He struggles to accept responsibility for his elder daughters’ cruel natures and never fully acknowledges the folly of his actions in Act 1 Scene 1.

However, towards the end of the play, it becomes difficult to remain too critical of Lear. His reconciliation with Cordelia shows the best of Lear. Ashamed of his former unkindness, he humbles himself before his youngest daughter, acknowledging her superiority. We can forgive him now focusing on the way he has been abused. At the end of the play Lear seems to move beyond himself. He has certainly accepted his powerless, diminished status and now sees himself primarily as Cordelia’s father. His language reflects his progress. Gone is the royal ‘we’. Now Lear uses the first person when he speaks of himself and his feelings. Cordelia is reclaimed lovingly as ‘my Cordelia’.

In Act 5, Lear clings to his ‘best object’ protectively. He revenges her death by killing the ‘slave’ responsible for hanging her. In all of his speeches in Act 5 Scene 3 the dying king focuses on Cordelia and the overwhelming grief he feels at her passing. Lear’s love for and defence of Cordelia go a long way to redeeming him from charges of egotism. Lear has clearly learned the value of true emotion. His recognition of the injustice in Cordelia’s death suggests that his judgement has been restored. But wisdom comes too late. Watching the final bleak moments of the play, it is easy to feel that Lear’s sufferings have been in vain. Read about growing up without a father

From the very start of the play, we can see Lear’s transgression into madness, and it is only until he has lost everything he aimed to protect, that he regresses into a relatively sane state of mind. On the stage, Lear’s madness is much easier, and more fascinating to follow. The audience find it hard to do anything but sympathise with the maddening King. From his temper tantrum in Act 1 scene 1, he portrays himself as merely a proud kind who feels he has been betrayed by the person closest to his heart, namely Cordelia. It is from this point onwards that the once respected King starts to lose his hold over those around him, and more importantly, over himself. The courtly manner in which everyone communicated with him disappears as soon as Kent does the unmentionable thing, and sticks up for Cordelia during her rejection after her failure to comply with the unwritten rules of the ‘love test’. His older daughters’ plotting to kill him further illustrates this lack of respect.

The introduction of the Fool adds to the waning stature of the King as he openly insults him, but this is acceptable as it is merely part of his ‘routine’ being the Fool. In this readers opinion, Lear’s only sin is his original one; namely that where he banishes Cordelia after her brutal honesty. Lear is then on a slippery slope of cause and effect. He was the cause, and everything else that happens in the play is the effect. Nobody could have foreseen the immanent downfall which his original sin leads to. Once this point of view has been adopted, it is impossible to see Lear as the true perpetrator in this spiral of destruction. It is difficult to imagine disharmony in the kingdom if for example, Cordelia had indeed ‘heaved her heart into her mouth’.

So, to conclude, although Lear was the initial cause of sin in the play, the actions of others; such as Goneril and Regan to name but two. The wheel has been given a push in Act 1 Scene 1, and the initial force was too great. It carried on turning, and Lear was at the bottom when is came crashing round. Lear loses everything; his kingdom, his Fool, his three daughters and his own life. ‘ Come not between the dragon and his wrath.’ Unfortunately, the wrath was too strong for even the dragon himself.

'A man more sinned against than sinning'. Is this your reading of Shakespeare's King Lear?. (2020, Jun 02). Retrieved from http://studymoose.com/man-sinned-sinning-reading-shakespeares-king-lear-new-essay 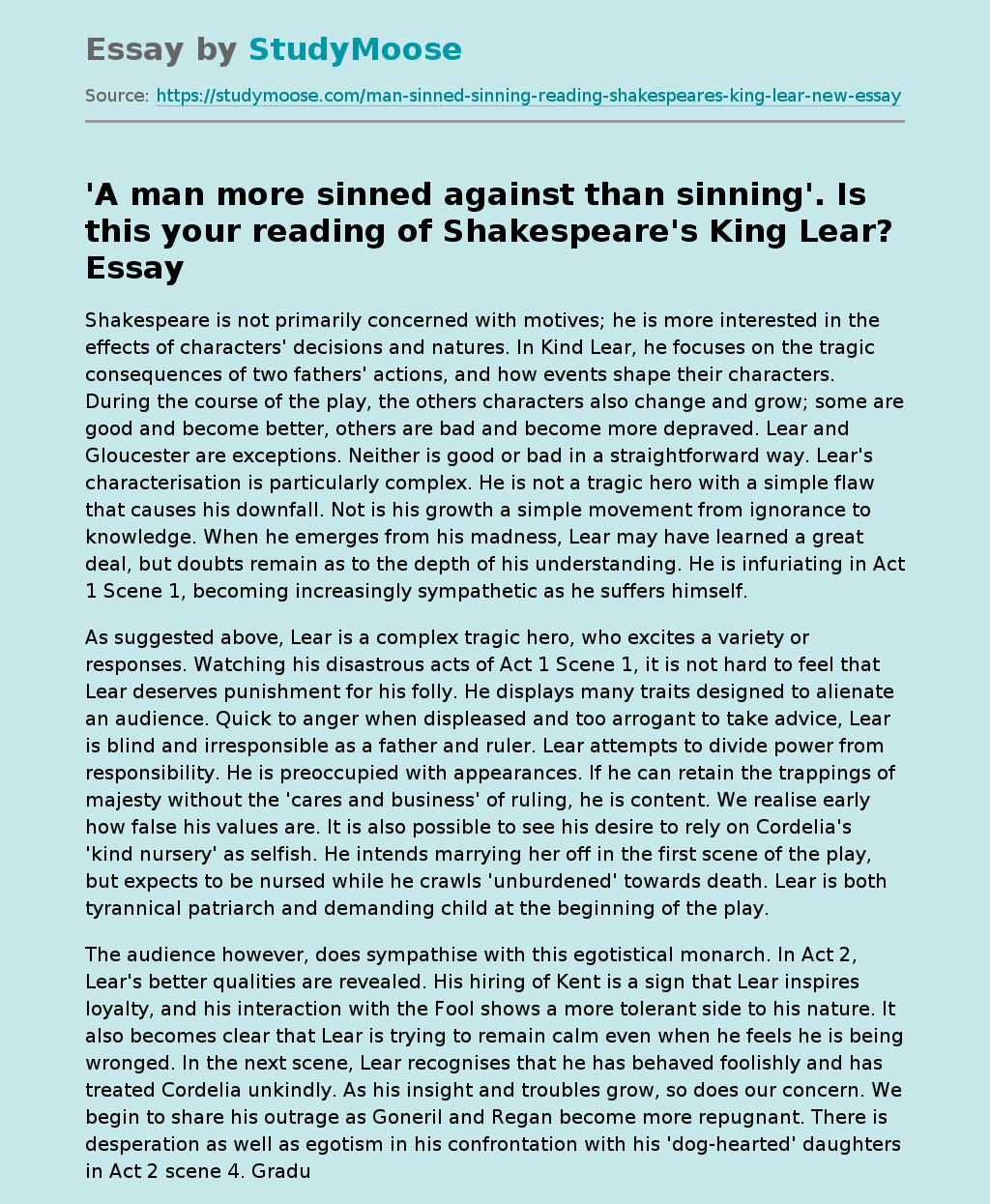