Service is the action of helping or doing work for someone or for a group of people. Malala is an activist that truly understands the meaning of service. In the novel I Am Malala, Malala Yousafzai tells about the hard times she has gone through in her life and how it has encouraged her to fight for education for children. Malala is a twenty year old activist that has started her own fund to spread awareness for education of young women.

Her mission is to see a world where every girl can complete twelve years of safe, quality education (Malala Fund). Malala exemplifies a true life of service in many ways, including, how brave she always is during times where being strong is difficult, her love and passion towards helping children and Pakistan, and being a women’s rights activist that is not afraid to amplify her voice for others, especially young girls. Our future leaders and activist will have a role model of their own and that is Malala.

Although Malala is not a Christian herself, she still is one of the prime examples of what Christian service should be through her advocacy and dedication to women’s rights educational rights.

To commence, Malala uses her rough times as motivation to keep fighting and stay hopeful through it all. In her novel, she tells about her father speaking out against the Taliban and putting his family’s lives in danger. Malala is not afraid of what they will do to her and it does not keep her from biting her tongue.

This act of bravery lead to her being shot by the Taliban, i the head, on October 9, 2012. She nearly lost her life due to this incident and was put into a coma (Yousafzai). When she had awaken from her coma, she was stronger than before. She spread the word of what is going on in Pakistan and about girls’ education more and more. Her accident only pushed her to fight harder and be stronger. As stated by Malala in her Nobel Peace Prize acceptance speech, “I had two options. One was to remain silent and wait to be killed. And the second was to speak up and then be killed. I chose the second. I decided to speak up.” This proves her motivation towards what she does and that it means more to her than her own life. Her bravery is a true act of service.

Furthermore, Malala adores her country, no matter the destruction it goes through, and the children on this Earth, no matter the lies they tell. Malala Yousafzai has become the voice of 32 million uneducated girls (Winegar). She has dedicated her life to establishing several facilities in different countries to educate young girls who wouldn’t be offered the opportunity otherwise. About 8.3% of the population in Pakistan cannot afford sending their son to school, let alone their daughters (World Inequality). Malala has been been working towards fixing this issue in the case of females. In Nigeria, she has set up “girls’ clubs” to offer a secure place for girls to get away from their everyday struggles. She also eliminated school tuition and fees, but she also raised the qualifications required to be a teacher in the country of Nigeria (Malala Fund). This ensures that the children receive a valuable education.

In addition, Malala encourages future leaders by speaking up for what she believes in as an activist. Malala was born and raised to be how she is today. Her father, a humans-rights activist himself, setup female schools in Swat and spoke up for women’s rights (Malala Fund). Ziauddin Yousafzai started teaching Malala right from wrong at a young age. In her early years, she began to document her everyday life and how difficult her everyday life and how difficult it was for her and the other young girls in her country to be threatened by the Taliban. The female children were told that they were no longer allowed to attend school and could only walk out of their home with a male. Malala used these stories to spread awareness of the issues in Pakistan. This put her and her family at risk with the Taliban (Yousafzai). Like usual, her bravely kept her going. Since 2000, the number of out-of-school girls has been nearly cut in half and women and girls are spending an average of 7 years in school, more time than ever before (Malala Fund). The educational crisis has lowered and is not as prominent due to Malala’s endless efforts.

All in all, service reveals the condition of a person’s heart (Rae). Malala’s efforts in exemplifying a true life of service, spreading love and passion towards children in Pakistan, and speaking out for what she believes in has proven to be successful throughout the world. She has lives up to the expectations she set in her Nobel Peace Prize speech, “Let us become the first generation to decide to be the last, let us become the first generation that decides to be the last sees empty classrooms, lost childhoods, and wasted potentials.” Malala is not only an activist for women’s rights, but an activist for encouragement towards service and ending terrorism worldwide. Who exemplifies nobility, peace, and service better than a teenager with motivations to make the world better day by day? 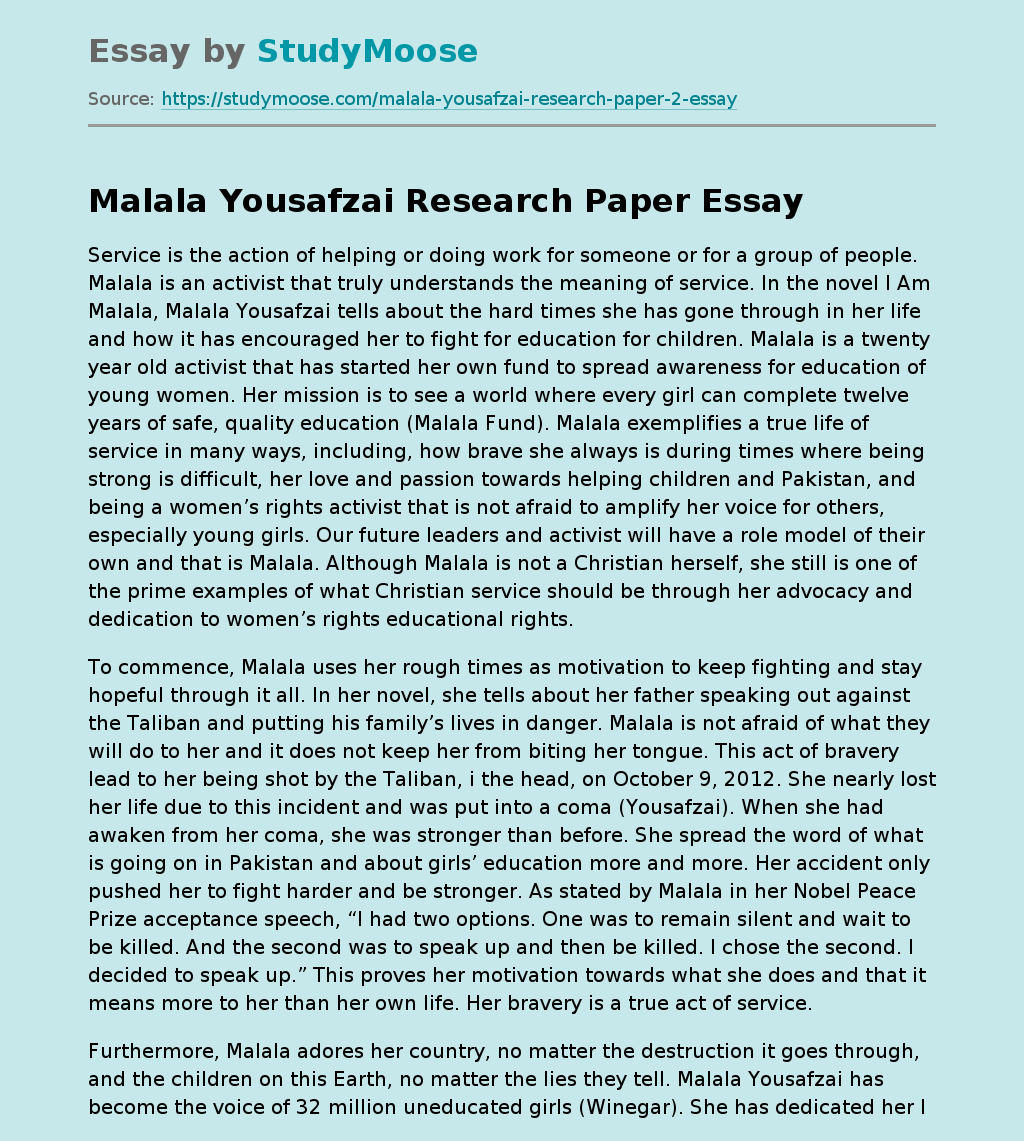