Over 130 million girls across the world are being deprived of their right to an education.

Proficient in: Education For Girls

Countries such as Afghanistan, India, and Brazil lack education programs for girls. Many advocates are currently fighting for these girls to be educated. One has especially proved to everyone that speaking out for equality has no age requirement. Malala Yousafzai, a Pakistani girl who was shot in the head by the Taliban for going to school has been an advocate for young women all over the world.

Don't use plagiarized sources. Get your custom essay on
“ Malala Yousafzai: Fight for Girls Education ”
Get custom paper
NEW! smart matching with writer

Malala was born on July 12, 1997 in Mingoria, Pakistan. From her early childhood, she was shown the value of education as her father, Ziauddin Yousafzai was a teacher at a girls school and an advocate for education himself. When Ziauddin welcomed a daughter into the world, he named after “Pakistani folk hero Malalai of Maiwand” (Freyne). Malala met this standard of a hero as she has faced and defeated many battles throughout her life.

At a very young age, Malala began to fight for her right to an education. The Taliban, an Islamic extremist group, took over swat valley in 2007 and created a severe problem for women in areas where they took over as “they banned women from working, [and] prohibited women and girls from attending school” (Smeal). In 2008, Malala and her father went to a local press club where she gave her first speech- “How Dare the Taliban Take Away My Basic Right to Education?”(Encyclopedia Britannica). Malala also began to blog anonymously on the British Broadcasting Corporation “about life in the Swat Valley under Taliban rule, and about her desire to go to school” (The Nobel Peace Prize).

When the Taliban took over in January of 2009 and ordered the closure of all girls schools, Malala’s school, which her “father had owned for more than 10 years” remained open (Lewis).

Her advocacy did not go unnoticed by the Taliban. In October 2012, Malala’s life was forever changed as she was on her way home from school. Her bus was stopped and two members of the Taliban shot her point blank in the head. She was badly injured as the “bullet destroyed her left ear and sent pieces of her skull into her brain” (Lewis). She was flown to a hospital in England where she fought for her life. She slowly recovered in Birmingham, where she now lives. All over the world people marched and protested this act of violence for example, “young girls carried pictures of Yousafzai and declared ‘I am Malala.’’(Gale Biography in Context).

This life-altering event only fueled Malala’s campaign forward. On “November 10, 2012, a month after the assassination attempt, was named a day of global action Malala and the 32 Million Girls Day”, a day to promote quality education for girls . In March of 2013, Malala began attending a school in Birmingham. One year after the attack in April 2013, Malala and her father created the Malala Fund, a nonprofit organization whose goal was to “advocate  at local, national and international levels for resources and policy changes needed to give all girls a secondary education” (Malala Fund). She also wrote a book in 2013 called “I am Malala” accounting her childhood life, attack, and advocacy. It has been over six years since Malala was attacked and she has not stopped her advocacy. The Malala fund has worked in several different countries such as Afghanistan, Brazil, India, Nigeria, Pakistan, and Syria. In fact, on her 18th birthday, she celebrated by opening a school for Syrian refugee girls in “Lebanon’s Beka Valley” (Bloch). This school will “serve more than 200 Syrian girls between ages 14 and 18” (Bloch). She has also been awarded the Nobel Peace Prize in 2014, the Philadelphia Liberty Medal, the International Children’s Peace Prize and many others for her determination.

Malala’s fight for girls education has made a serious impact over the world. From a young age, she fought for her rights. After living through a devastating attack, she worked even harder to get girls an education. Defying horrible odds, she has inspired people of all genders, ages, races, and religions to fight for the quality education of young women everywhere. 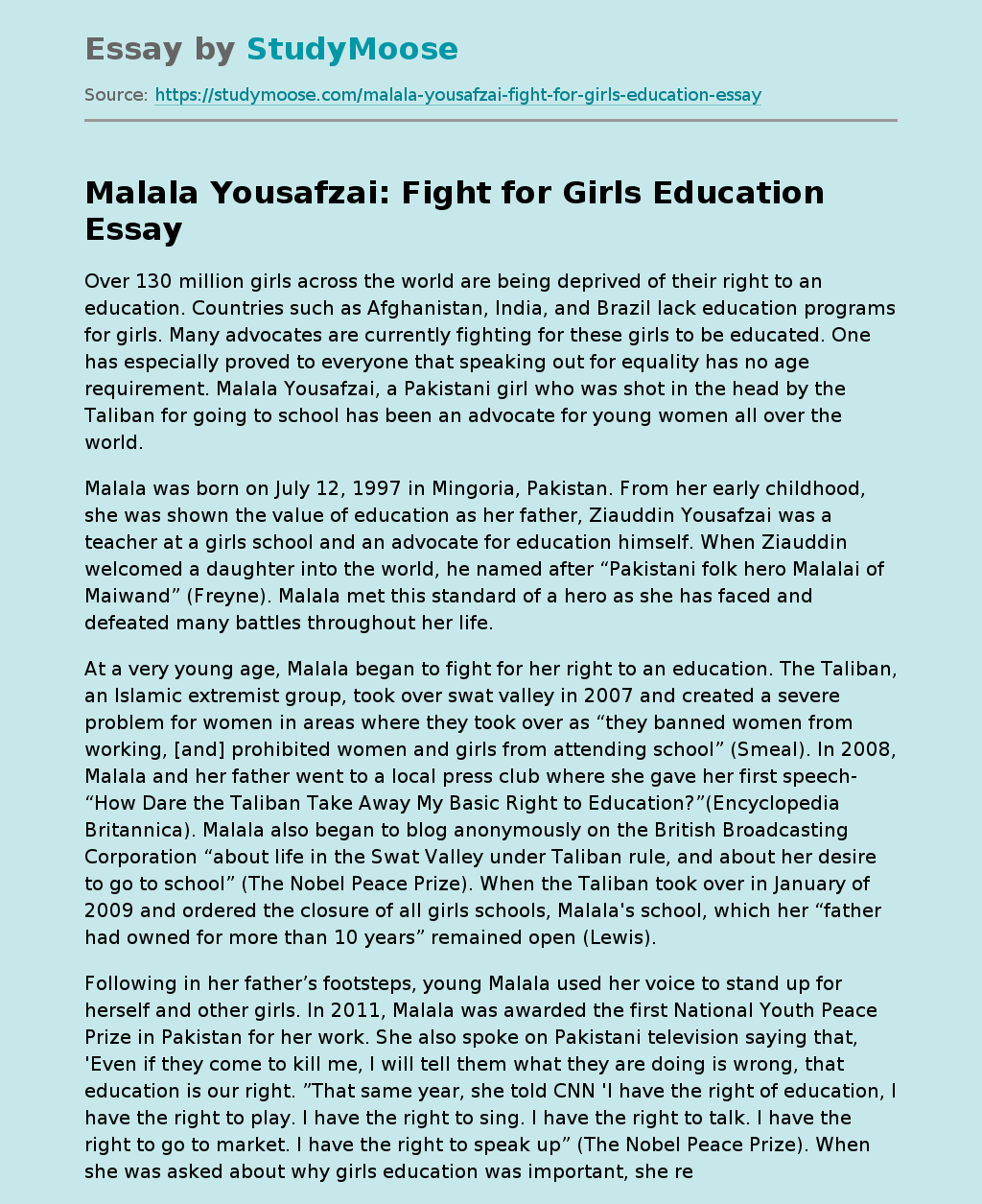