The trial of Bruno Richard Hauptmann in 1935 and the Lindbergh kidnapping was known by many as “the crime of the century”. Though many are still doubting whether or not Hauptmann actually committed the crime, there is much evidence pointing toward him that proves he was guilty. In examining the evidence presented, there was a great variety of it. It included handwritten evidence, witnesses, the ladder used to get into the baby’s window, and the ransom money found hidden in his home.

Don't use plagiarized sources.
Get Your Custom Essay on Lindbergh Kidnapping research paper Just from $13,9/Page

Many experts who testified clearly identified Hauptmann’s handwriting while witnesses saw him on the Lindbergh estate lingering in his vehicle the day of the crime. In light of the specific type of ransom money that was discovered in his home, Hauptmann’s guilt was confirmed. The presented factors were overwhelming in proving his guilt. Bruno Hauptmann was guilty of the Lindbergh baby kidnapping and murder and should have been executed.

Hauptmann had a long history of lawbreaking and violence throughout his teenage years.

When he was a teenager, Hauptmann served as a machine gunman on the western front for the German army. During his time served, he lost two of his brothers, who died in battle. Hauptmann also lacked in much of his education. He only attended eight years of school and two years of secondary school for machinery and carpentry. After he was released from the army, he had no choice but to turn to a life of crime. Due to the crashing economy in Germany after the war, unemployment was extremely high, and with little education, Hauptmann needed a way to survive (“Bruno Richard Hauptmann Biography”). Hauptmann was convicted numerous times in Germany, and after many years of theft, arrests, and jail time, he was sent to prison. Surprisingly, he managed to escape incarceration. Hauptmann’s next step was to try and illegally enter the United States. Two times he failed and was sent to back to Germany until November of 1923, when he successfully smuggled himself into the United States.

During October of 1925, Hauptmann married a German immigrant, Anna Schoeffler, and successfully attempted to live a normal life with her. That was until Hauptmann committed the grisly crime of kidnapping and murdering Charles Lindbergh Jr, a toddler of only 20 months old (“Bruno Richard Hauptmann Biography”). There was an exorbitant amount of evidence presented to the jury during Hauptmann’s trial. Among the evidence was that of a ransom note left on the windowsill of the Lindbergh baby’s window. The note read “Dear Sir! Have 50000$ redy 25000$ in 20$ bills 15000$ in 10$ bills and 10000$ in 5$ bills After 2-4 days we will inform you were to deliver the Mony. We warn you for making anyding public or for notify the Police The child is in gut care. Indication for all letters are singnature and three holes” (“Letters of Note: The Child Is in Gut Care”). Experts compared the handwriting on the note to that of Hauptmann’s, and it was relatively an identical match. Many of the letters were written the same, for example in the note, the perpetrator curled his at the end “y”’s, and Hauptmann proved to do the same (Linder). Although there was one expert who testified on Hauptmann’s behalf, his explanation was basically thrown away by the jury because it was outrageous (“The Evidence Against Hauptmann”).

Another crucial piece of evidence found was the ladder Hauptmann used to get himself into Lindbergh’s window. He left the ladder at the crime scene and it was inspected by the crime scene investigators. It was said to be manufactured by the same wood that is used at a lumber yard near Hauptmann’s home. It was constructed at home and made to easily fold into three parts so that it could be transported in a tight space. Hauptmann used this to get into the nursery on the second floor of the Lindbergh home. When investigators looked around Hauptmann’s neighborhood, they discovered a lumber yard and compared the wood used in the ladder and discovered a match. Also, the wood from his attic was used to construct the ladder. Although the defense testified at the trial that the ladder had been soiled and should not be used as a real incriminating piece of evidence, it was still largely considered in the jury’s decision of making a verdict (“The Evidence Against Hauptmann”). Hauptmann could not be placed with the child, or committing the heinous crime, but many people witnessed him around the Lindbergh residence a few days before the kidnapping, and even in his vehicle the day of the crime.

Doctor John Condon, the man who delivered the ransom money to Hauptmann for the Lindberghs, testified that Hauptmann was definitely the man who was at the meeting spot to pick up the ransom money. There were many witnesses for everything that Hauptmann did previous the crime; he was identified cashing in the gold notes and following the ransom negotiator. However all witnesses except Doctor John Condon refused to identify Hauptmann for the court. The only witness who testified was Condon (“The Evidence Against Hauptmann”). In order to hopefully capture the criminal of the crime, the Lindbergh’s paid the murder not in money, but in gold notes. Gold notes were unsuccessful in American banking and were discontinued after 1933. They were very easy to track and very obvious when used. All banks in America had a list of the serial numbers of the gold notes, and once the ransom money was paid, police tracked them for two years. Most of them were used and cashed in the New York area, where Hauptmann lived. The gold notes were used against Hauptmann as evidence when he cashed one in at a gas station and when police found them in his home.

A man who worked at a gas station had had his suspicions about Hauptmann and written down his license plate number on the actual gold note and turned it into the police. Upon being turned in, the police tracked the license plate and found it belonged to Hauptmann. The next day, he was arrested and his house was searched. Investigators found $14,000 in his garage and it was discovered to be the ransom money that Condon delivered. (“The Evidence Against Hauptmann”). The remains of the victim, Charles Lindbergh Jr, were found near his home on May 12, 1932. When detectives further investigated the child’s remains, they discovered that he was killed the night of the kidnapping and Hauptmann rid of his body by leaving it in the woods. They also suggested that Lindbergh Jr was killed the night of the kidnapping, and was never alive while ransom money was being exchanged and negotiated (Linder). America was completely taken aback that someone would cause such heartbreak to their hero, Charles Lindbergh. Local newspapers wrote articles of how the kidnapper deserves the utmost punishment to the full extent of the law (“Historical Newspapers”).

Newspapers also blamed gangs for the kidnapping of the “Lone Eagle”’s son. Notorious gang leader Al Capone was the center of attention after the crime took place, but in order to clear his name, he offered a $10,000 reward for the safe return of the baby, and also said that he himself would find the murderer if he was let go from incarceration (“The Crime of the Century”).

Hauptmann testified until his last breath that he was innocent. His last words were “I am glad that my life in a world which has not understood me has ended. Soon I will be at home with my Lord, so I am dying an innocent man. Should, however, my death serve for the purpose of abolishing capital punishment—such a punishment being arrived at only by circumstantial evidence—I feel that my death has not been in vain. I am at peace with God. I repeat, I protest my innocence of the crime for which I was convicted. However, I die with no malice or hatred in my heart. The love of Christ has filled my soul and I am happy in Him” (Linder). He tried his hardest to convince the jury, the judge, and the prosecuting attorney that he was innocent.

However, the evidence spoke for itself. Everything played against Hauptmann’s favor, and he was executed on April 3, 1936 (Linder). The label “crime of the century” is very pertinent for the Lindbergh trial. Many people mourned for America’s hero after he was forced to deal with such heartbreak. The Lindbergh family were thrown into a pit of despair after the kidnapping and murder of their beloved son. Although many believed that Hauptmann was innocent, and his trial was unfair and tampered with, the amount of evidence presented was enough for the jury to reach a guilty verdict. Amidst the evidence was gold notes that were used as ransom money, handwritten evidence, the ladder used to get into the nursery window, and eyewitnesses. Bruno Richard Hauptmann was guilty for the kidnapping and murder of Charles Lindbergh Jr and it was a righteous act that he was arrested and executed. 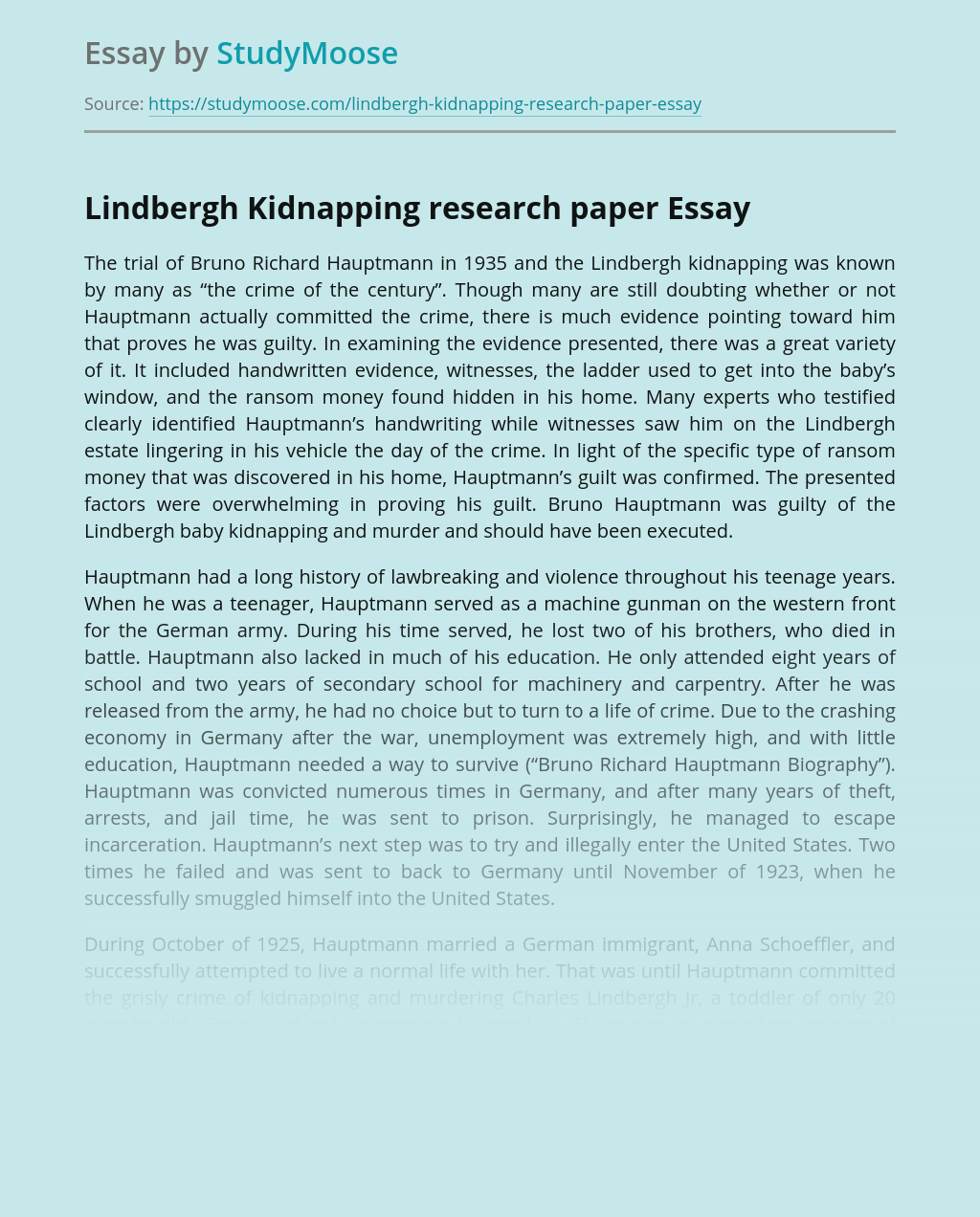 Rate this post Corrections have existed throughout society for many years and continued to change and evolve in the United States reflecting society’s values and ideals throughout the centuries. In the criminal justice system, corrections exist in more than one form. Not only do corrections refer to jails and prison systems but they also pertain...

Crime is a Social Construct

Rate this post Crime is the product of the social structure; it is embedded in the very fibres of society. In this essay, I aim to explore different theories as to why crime exists within society and how we as a society therefore construct it. Crime is a social construct; it is always in society...

Get Essay
“After twenty years” by O. Henry

Rate this post The short story “After twenty years” is a classical story written by O. Henry. The story is about the two characters that were actually best of friends. They grew up in New York until lost sight of each other. One of them leave the place and tried to live in West to...

Rate this post “A Hate Crime is an intentional, deliberate, and methodically-charged crime executed in order to cause harm or damage with regard to a specific victim chosen as a result of prejudice, racism, bias, and unlawful resentment. The range of Hate Crimes is a broad one”. The paper will inform readers of different types...

Prison Is Not a Cure for Crime

Rate this post There has been a great deal written about the fact that the number of crimes have dramatically increased in recent years. Educators have debated whether criminals should be put in jail or not. One idea that has received much attention is that prison plays an important role to reduce criminals. This essay...