Today, “the number of people in the U.S. who are in poverty is increasing to record levels with the ranks of working-age poor approaching 1960s levels that led to the national war on poverty” (“Poverty in the United States,” 2012). When looking at the increasingly important issue of poverty in the United States, one cannot help but wonder how this will affect future generations and the stability of the nation as a whole. In order to fully understand the problem at hand, poverty must first be defined, have the causes and effects of it examined, look at it from a world-wide perspective, and then consider how it will affect the future of the United States.

Don't use plagiarized sources.
Get Your Custom Essay on Poverty in the United States Research Paper Just from $13,9/Page

The goal of this document is to bring to the readers attention the potential consequences of ignoring poverty in the United States and motivate them to do something about it.

“Poverty is the deprivation of well being that occurs when people cannot satisfy their basic needs” (“Poverty,” 2012).

There are two kinds of poverty: absolute poverty and relative poverty. Absolute poverty, or destitution, refers to the lack of basis needs such as food, water, clothing, shelter, health care, education, and the necessary supplies to live hygienically (“Poverty,” 2012). When poverty is measured in relative terms, it is defined contextually by the median income of where people live (Smeeding, 2006, p. 71).

Relative poverty does not imply that that the person is lacking anything, just that they are living below a certain level of income (“Poverty in the United States,” 2012). For example: a person with an annual income of $150,000 living in a neighborhood with an average annual income of $500,000 is relatively poor even though they by no means lack the ability to provide the basic essential needs outlined by absolute poverty. Both types of poverty vary from location to location, but absolute poverty tends to be more of a universal definition while relative poverty is strictly dependent upon the

Running head: POVERTY IN THE UNITED STATES 3
location in which a person lives. “Since the 1960s, the United States government has defined poverty in absolute terms. When the Johnson administration declared ‘war on poverty’ in 1964, it chose an absolute measure. The ‘absolute poverty line’ is the threshold below which families or individuals are considered to be lacking the resources to meet the basic needs for healthy living; having insufficient income to provide the food, shelter and clothing needed to preserve health” (“Poverty in the United States,” 2012).

“A 2001 poll in the United States asked: ‘In your opinion, which is the bigger cause of poverty today- that people are not doing enough to help themselves out of poverty, or that circumstances beyond their control cause them to be poor?’ Responses were nearly evenly split between ‘people not doing enough’ (48 percent) and ‘circumstances’ (45 percent)” (Iceland, 2006, p. 70). There are many speculations as to what the causes of poverty in the United States are and studies show that the main causes are both social and economic, both of which will be discussed here. Problems leading to poverty in the United States include family status, the level of education of the head of household, age of the head of household, and race.

The factor related to poverty to look at is race. In 2003, the poverty rate amongst African Americans in the United States was 24.4%, almost double the national poverty rate of 12.5% (Iceland, 2006, p. 81). This could be due to the oppressions of society through racial discrimination or profiling, or simply the effects of the oppression that once was- slavery and the racist discrimination of the early 20th century. “Poverty increases the risk of homelessness” (“Poverty,” 2012), and children who grow up in low income families have less of a chance to get a good education and attempt to better themselves and their income (“Poverty,” 2012). With this in mind, it makes sense that the African American community makes up a large majority of the poor in the United States. Their beginnings in this nation were the lowest, poorest conditions of anyone in that day. Many believe that they simply have not been able to

Running head: POVERTY IN THE UNITED STATES 5
climb out of the hole they were placed in to when they were enslaved back in the 1700’s. “Another factor that contributes to higher poverty rates among African Americans is human-capital skills differentials. This refers to differences in average levels of education, quality of educational opportunities, and subsequent work experience. The gap in average levels of education has declined over the past few decades. Nevertheless, the quality of schooling received by children varies widely, and African Americans are more likely to attend inferior schools with fewer resources” (Iceland, 2006, P. 84).

Attendance to schools with fewer resources is a direct result of their economic situation, which causes the poor to stay poor in this case. Another example of race being a factor of poverty in the United States can be seen when observing the hispanic culture. In 2003, the Latino poverty rate was at 22.5%, just below that of the African American community (Iceland, 2006, p. 85). This is in large part due to immigration, as “immigrant families are at greater risk of poverty than nonimmigrant families” (Iceland, 2006, p. 85). Also, “in places with many immigrants, the competition for low-wage jobs also appears to drive down wages for these immigrants” (Iceland, 2006, p. 86). For as much as Americans focus on equal opportunity and not discriminating based upon race, it would appear that poverty does discriminate based upon race and does not provide all races with equal opportunities in the United States.

to look at poverty from a world-wide perspective. Mahatma Gandhi said, “Poverty is the worst form of violence.” All across the world, this violence is real, and to many, a way of life. The poverty line is much lower in some other countries due to an uneven distribution of wealth. In the USA, the wealthy middle class brings the median up and causes the poverty threshold to be higher. However, different factors such as the level and trend of poverty and inequality amongst nations, along with considerable detail on the sources of market incomes and public policies are used to compare poverty levels from nation to nation (Smeeding, 2006, p. 69). With that said, absolute poverty is much more rampant in some other countries than it is in the United States.

For example: in 2008, of the estimated 1.29 billion people living in absolute poverty, 400 million of them lived in India and 173 million lived in China. That’s almost half of the world’s poor living in just those two countries, while the United States hosted just 39.1 million. Everyone reacts to their circumstances in a different way. For example: “in Zimbabwe, a number of girls are turning to prostitution for food to survive” (“Poverty,” 2012). Some turn to violence or steal to get what they need to survive.

For many Children living in poverty, their lives are deemed a failure before they are ever given a chance to succeed. “Research has found that there is a high risk of educational underachievement for children who are from low-income housing circumstances” (“Poverty,” 2012). In some countries, young children can be seen begging in the streets for money. As Abraham Maslow showed in his hierarchy of needs, when people don’t have their basic needs- food, water, shelter, safety, comfort, etc.- it can be very difficult to focus on much more than those. For children living in absolute poverty, these are the very things that they seek after on a

Running head: POVERTY IN THE UNITED STATES 7
daily basis. The number of homeless children in America rose from 1.2 million in 2007 to 1.6 million in 2010 (“Poverty,” 2012). Children are the future of this great nation. If so many are forced to grow up in sub-par circumstances without the necessary tools and opportunities to be successful, how can the United States fulfill its potential as a nation.

Poverty rates are on the rise once again. It is everybody’s responsibility to do something about it. Give what can be given. Feed the homeless. Care for them. Provide the poor with an opportunity to better their lives. “Give a man a fish and you’ve fed him that day, teach a man to fish and he can eat for the rest of his life.” Sometimes all that needs to be given is a little bit of time and energy to reach out and attempt to better someone else’s circumstances. In this paper, poverty was defined, the causes and effects of poverty were examined, it was looked at from a world-wide perspective, and the long term effects of poverty in the United States were considered. People can never know what they are truly capable of until they truly apply themselves. Just because poverty has always been an issue in the world does not mean that it always has to be. Take it from a man who spent his life serving the poor and trying to better the world around him:
“be the change you wish to see in the world” -Mahatma Gandhi. 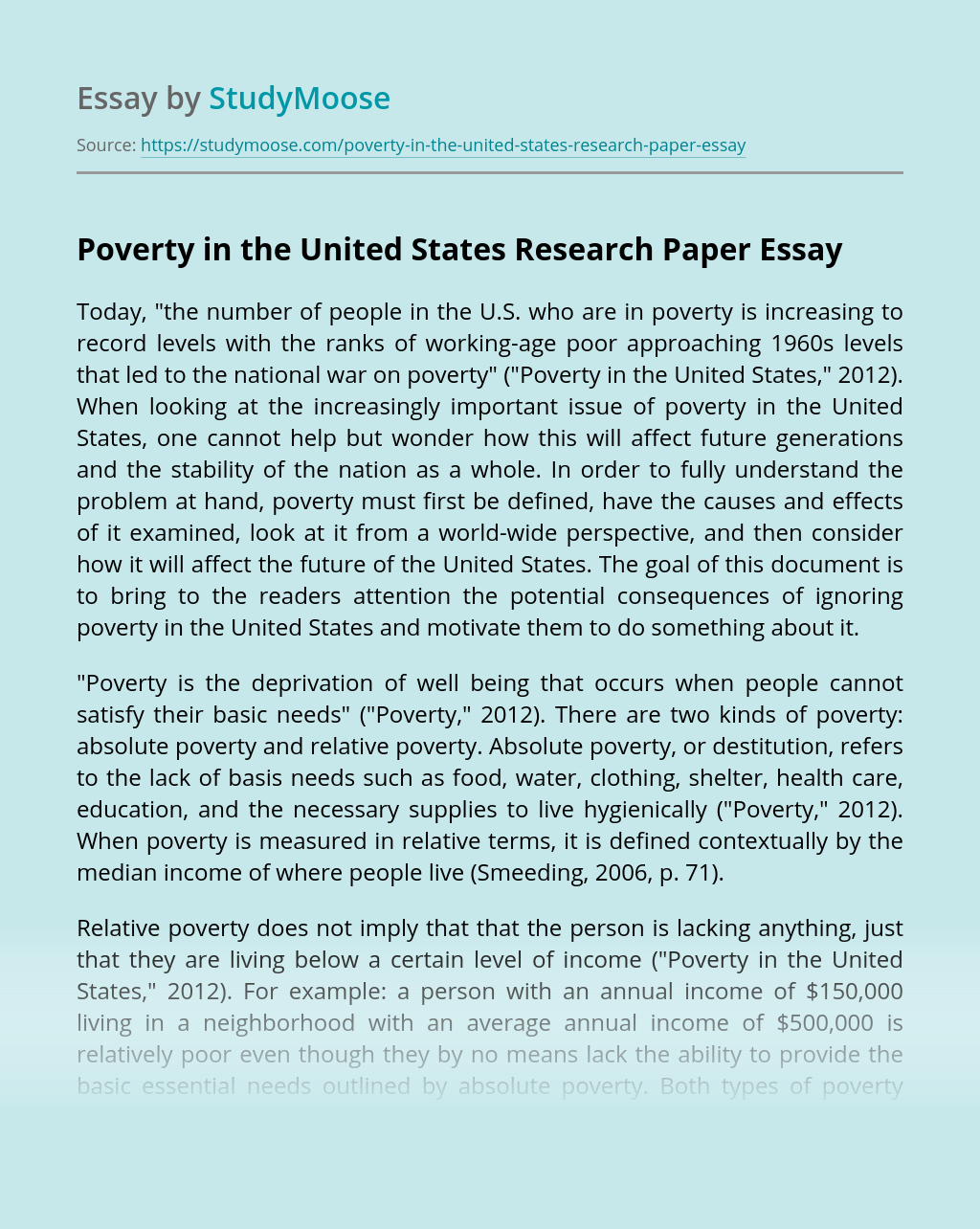 Nutrients are elements essential for life on Earth. The most important of these nutrients are water, carbon (and oxygen), nitrogen, and phosphorous. These nutrients are recycled throughout the ecosystems to provide for the living organisms. Water takes up more than two-thirds of the Earth’s surface and makes up almost 70 percent of living matter (Pidwirny,... VIEW ESSAY

Introduction About Oscar Lewis Oscar Lewis, born on December 25, 1914, was an American Anthropoligt. He is best known for his vivid depictions of the lives of slum dwellers and his argument on a cross-generational culture of poverty among poor people transcends national boundaries. Lewis contended that the cultural similarities occurred because they were “common... VIEW ESSAY

Was the most devastating stock market crash in the history of the United states The crash signalled the beginning of the to-year Great Depression that affected all western industrialized countries. On March 25, 1929 a mini crash occurred after investors started to sell stocks at a rapid pace, exposing the markets shaky foundation. 100,000 American... VIEW ESSAY

Many plant species that evolved in hot, dry climates fix carbon through alternative pathways. Under hot and dry conditions, plants can rapidly lose water to the air through small pores called stomata. Stomata (singular, stoma), are usually located on the undersurface of the leaves. Plants can reduce water loss by partially closing their stomata when... VIEW ESSAY