Mahatma Gandhi- Influence, Integrity and Tide of Social Change The past has witnessed eminent men in the form of kings, political leaders and sages who made the world a better place to live. Only few were able to lead an entire nation and bring a significant change to millions. Many established power and authority and relied on the strength of armies. While, there was a man in India who explored the power of one; he raised consciousness without raising his voice.

Don't use plagiarized sources. Get your custom essay on
“ Mahatma Gandhi: Influence, integrity, and Tide of Social change ”
Get custom paper
NEW! smart matching with writer

Mahatma Gandhi, a political and spiritual leader who led the way of non-violence and truth did significant contribution to humanity and people of India. Gandhi’s ultimate leadership principles and struggle set India free from 200 years old British reign. Gandhi, with his impeccable influence and integrity, brought a positive change formulating a new India.

In South Africa, when Gandhi politely asked his followers to help him volunteer for the victims of pneumonic plague (in spite of knowing the risk of infection, by the contagious disease) they agreed and said, “We go where you go” (Barnabas & Clifford, 2012, p.

143, ¶ 4). With his credibility as notable humanitarian and leader, he influenced a group of Pathans to pledge for non-violence. He worked behind the scenes willingly, without the need for constant recognition or approval from others. In South Africa, he used to walk past the president Kryer’s house in Johannesburg. One day there was a guard change; the new guard pushed and kicked Gandhi into the street. One of his influential friends saw this and asked him to go to court.

Gandhi felt no resentment for the under-estimation of his self by the guard. Instead, he had forgiven his abuser. Gandhi preached forgiveness and always had the consistency in his words and actions.

He practiced service-leadership and voluntary subordination. When Zulu rebellion took place, in South Africa, it injured many Zulus with no one to attend their injuries. Gandhi along with 23 of his volunteers nursed them back to health (Barnabas & Clifford, 2012). Unlike other leaders, who identified with the symbol of power, Gandhi identified with the symbol of service to humanity. He was people-centric and symbolized the people he served.

Gandhi had an ability to empower people and truly believed in staff-development. He tried to mound a new free Indian who could stand on his own, to fight for freedom. Eventually, he developed a self-help culture in shining India. Wherever Gandhi went, he remained available for his followers and built real genuine relationships. He willingly spent his time with workers and carried out clerical work of the Congress office. Heath, the chairman of Indian Conciliation Group, London in 1939 wrote about Gandhi, ”He is also the man of much physical work, very approachable, lovable and humorous” (Barnabas & Clifford, 2012, p. 140, ¶ 2).

With Qualities like integrity, people-centric, influence and self-discipline Gandhi brought out a positive change in people across the globe. Even though, Gandhi was the leader of the Indian National Congress on its formation, he did not seek after influential posts. Instead, when young leaders like Jawaharlal Nehru rose up he chose him his successor; even after independence he did not take any position in the government but remained humble as a servant to mankind. His deeds and fundamentals got him inscribed with golden words in the pages of history. The father of the Nation unheedingly ignited people with non-violence, truth and patriotism. 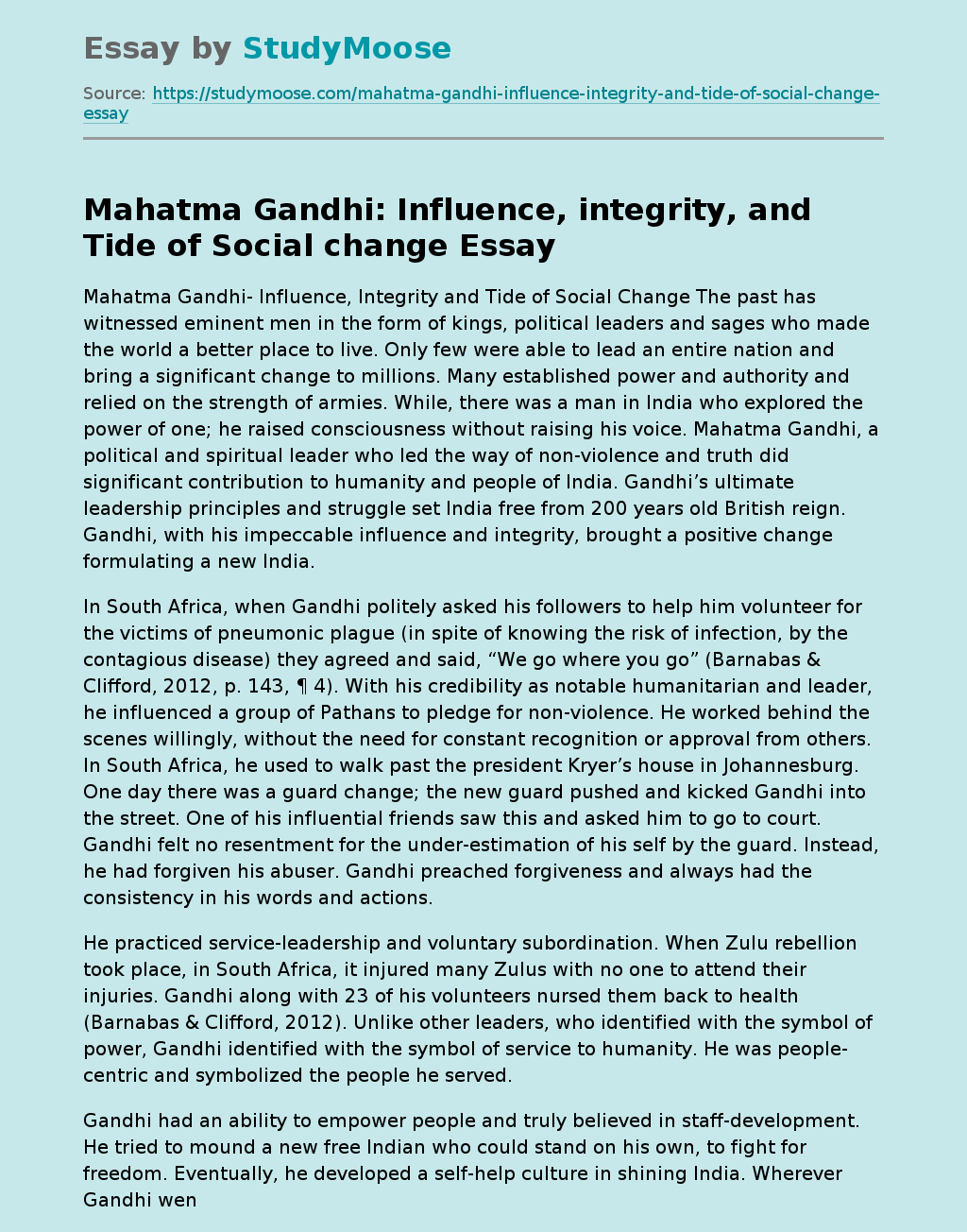