“An eye for an eye makes the whole world blind”. This is a quote said by Mahatma Gandhi, an Indian revolutionary and religious leader who used his religious power for political and social reform and was the main force behind the second-largest nation in the world’s struggle for independence. Gandhi was born on October 2nd 1869 in Probandar, India. Him and his family lived in a self-sufficient residential community and only ate simple vegetarian food and undertook long fasts. He was the fourth child in the family and often had it the worse when it came to his education for his parents wanted him to follow in his father’s footsteps of becoming a lawyer.

Don't use plagiarized sources.
Get Your Custom Essay on Mahatma Gandhi Biography Speech Just from $13,9/Page

He eventually became a lawyer and trained in law in London and was employed in South America during the revolution from British control in India. At the age of 15 he married his wife Kasturba and had 4 children named Hirlal, Manilal, Ramdas, and Devdas.

It was at this age that Mahatma first helped protest excessive land-tax and discrimination on the poorer people of India.

What made him different from other protesters was that he created the concept of Satyagraha which is a nonviolent way of protesting injustices. He also spent 20 years of his life in South Africa fighting discrimination. He is also majorly known for leading the Indians in the Dandi Salt March of 1930 challenging the British-imposed salt tax. For many of his nonviolent protest though, he and many of his followers were often imprisoned in both South Africa and India. But weirdly enough, even after getting arrested many times, he never reacted in any violent ways for his vision of a free India was based off religion and pluralism. He was often described by many Indians as “The Father of The Nation”.

On August 15th 1947, India attained independence after a great political and social struggle. Mahatma had achieved his goal but only enjoyed it for a short period of time. Mahatma Gandhi died on January 30th 1948, at the age of 78 in New Delhi after being assassinated by Nathuram Gadse. However, Mahatma’s legacy still continues for he inspired many movements for civil rights and freedom across the world. I decided to choose Mahatma Gandhi for my biography speech because he had a dramatic influence on the Indian Independence movement and achieved it in all nonviolent ways while never giving in to the evil that so many people do today. 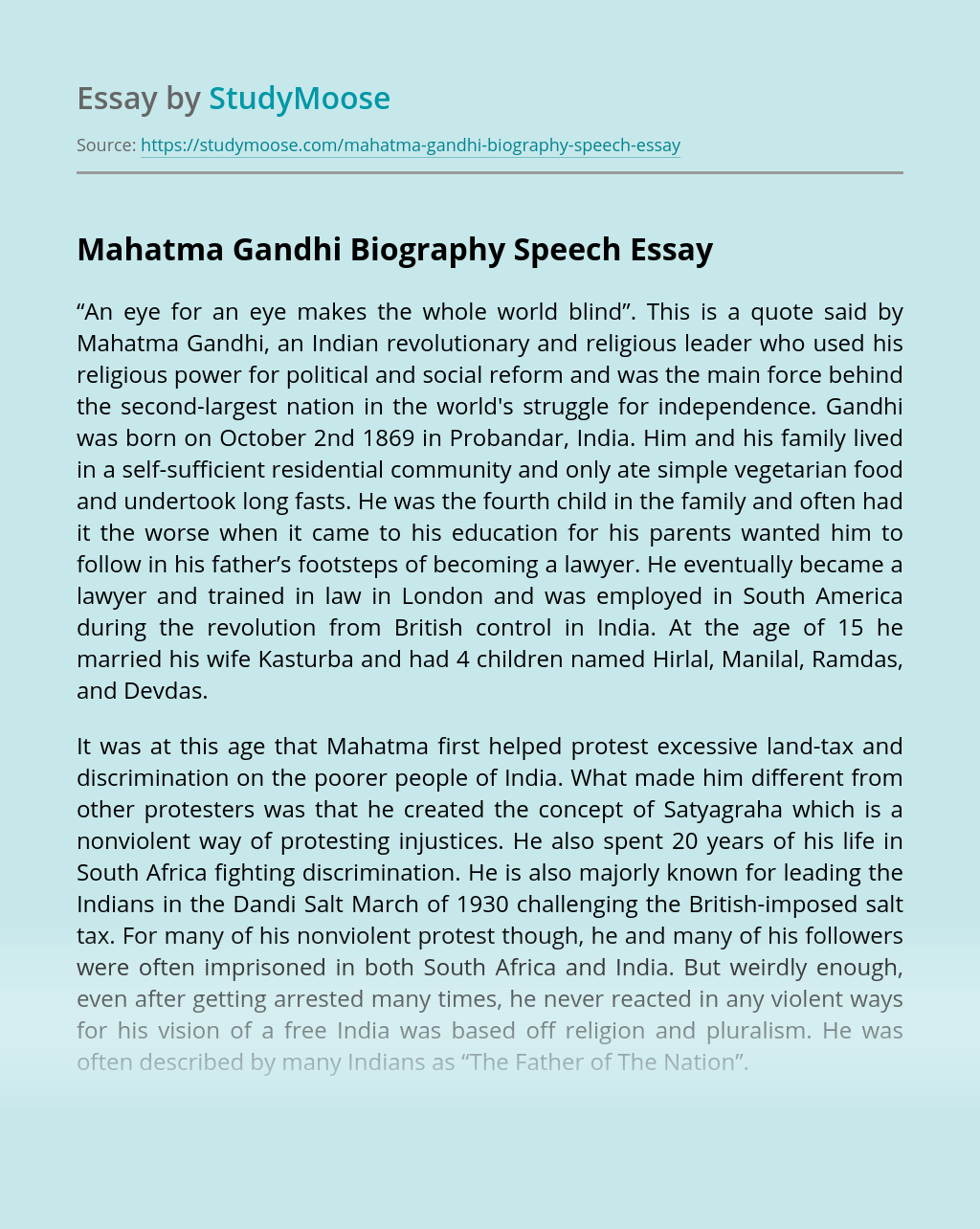 How to become a successful business person

1. Have knowledge about business Choose a business school Master business fundamentals Accumulate knowledge through real business activities 2. Develop our interpersonal skills Explanation: Interpersonal skills help us to interact well with people. Furthermore, we need these skills to manage our employees and negotiate deals or contracts effectively. As a result, we will become a... VIEW ESSAY

Humanism based on the study of the classics, the literary work of Greece and Rome. Focus was on human achievement. Fresco Painting on the fresh wet plaster with water based paint. Petrarch Often called the father of the Italian Renaissance humanism, did more than any other individual in the 14th century to foster the development... VIEW ESSAY

One and six men and one in four women are statistically shown to recieve a sexual assault in their lifetime. Sex Offenders are a danger to men and women everywhere. Megan’s law gives each state the privalge to make private and personal information about regesister sex offenders accessable to the public. In Michigan, “all offenders... VIEW ESSAY

The articles that I am going to analyse are on the issue of a group of hippies wanting to celebrate the Summer Solstice Festival in June 1986 in Hampshire and how determined police officers were trying to stop them from doing so. Whilst both articles are based on the same issue, their use of language... VIEW ESSAY