He had always been a private citizen without wealth, property, title, post, academic distinction, scientific achievement or artistic gift. Yet men with governments and armies behind them paid homage to him. He was the spokesman for the conscience of world. His style was born of a genuine humility of soul. The United Nations paid tributes and lowered its flag when he died. ” These are the words written by the late Pandrangi Rajeswara Rao in his book, “Profiles in Patriotism” epitomising the personality of a great Indian who changed the course of the nation’s history and simply signed M.

Don't use plagiarized sources. Get your custom essay on
“ Mahatma Gandhi Apostle of Peace ”
Get custom paper
NEW! smart matching with writer

Mohandas Karamchand Gandhi, venerated as Mahatma Gandhi, was born in Porbandar, a coastal town, near Rajkot in the Saurashtra region (Gujarat), on October 2, 1869. Formal education over, Gandhiji went to England for further studies and became a Bar-at-Law and practised for a while in the famous Temple Inn. After returning home, he set up practice and moved to Durban to defend one of his clients.

There he was aghast to experience the ill-treatment meted out to fellow Indians, merely because of the subjugation of their native land by the British.

When he himself was thrown out the first class compartment by a whiteman, Gandhiji made up his mind to resist this whiteman’s arroagance. By that time he had already been influenced by the civil disobedience theory adumbrated by Thoreau. As a child he had witnessed a street play highlighting the trials and tribulations of Prahalada under his tyrannical father. Gandhiji saw Prahalada’s struggle as a manifestation of the individual against the all-powerful state.

With this background Gandhiji launched his famous non-violent ‘Satyagraha’ against the British, and succeeded to a great extent.

The South African experience was hailed all over, particularly in India. When he returned home, a tumultuous reception was accorded to him and he addressed meetings of intellectuals and the common people alike on the efficacy of Satyagraha. Lokmanya Bal Ganghadhar Tilak appreciated Gandhiji’s efforts and the liberal politician, Gopal Krishna Gokhale, advised Gandhiji to tour the length and breadth of the country to understand the people’s mind before taking up leadership. Gandhiji obeyed his `guru’.

The countrywide tour strengthened his sinews to launch the famous Non-Cooperation Movement in 1920 to protest against the Rowlatt Act and the 1919 massacre of innocent people in the Jalianwalla Bagh. After the exit of Tilak, Gandhiji filled the political vacuum effectively. He presided over the Belgaum session of the Indian National Congress, and gave a shape to the Non-Cooperation Movement at its Nagpur session. From then on, Gandhiji mobilised the people by his constant touch with masses and, through his mouth-piece, the `Harijan’ weekly.

In the words of Rajaji, Gandhiji had the “alchemy to shape men out of clay” who could lead the country as and when it became free. All his battles against the rulers were through non-violent popular movements. In fact, he called off the Non-Cooperation Movement after violence broke out in Chauri Chaura (Bihar) as part of the agitation. He conducted in a non-violent ambience all his subsequent agitations like the famous march to Dandi to break the Salt Law (Salt Satyagraha) of 1930, the subsequent Individual Satyagraha and the ultimate Quit-India Movement of 1942.

Alongside the ongoing political struggle, Gandhiji fought against social evils like untouchability, propagated the need for self-sufficient villages and promoted Khadi against the mill-made cloth imported from Lancashire. He was a strong votary of Hindu-Muslim unity. Qaid-e-Azam Jinnah’s insistence that Muslims are a separate nation hurt Gandhiji and pleaded in vain against partition of the sub-continent.

When freedom dawned splitting the country into India and Pakistan, he became a disillusioned man and chose to move to Naokhali in Bengal, to reduce the communal tension caused by cross-border migration of Hindus and Muslims from West Bengal and East Pakistan. Gandhiji’s was a versatile personality. He led an ascetic life and established his ashrams at Sabarmati and Wardha, radiating simple living and high thinking. A crusader upholding manual labour, he was unhappy with the machine replacing man in several areas.

Whatever he did as a patriot, journalist, author—his magnum opus is ‘My Experiments with Truth’—and social reformer, he excelled and had the uncanny knack of reaching the common man. Whenever asked for a message, Gandhiji used to say tersely: “My life is my message. ” There cannot be a better summary of Gandhiji’s life and mission than that rendered by Swami Rama, founder of the Himalayan International Institute of Yoga, Science and Philosophy, in his `Living with the Himalayan Masters’ thus: *Non-violence and cowardice cannot go together because non-violence is a perfect expression of love that casts out fear.

To be brave because one is armed implies an element of fear. The power ahimsa is extremely vital and active force which does not come from physical strength. *A true follower of ahimsa does not believe in disappointment. He dwells above in perennial happiness and peace. That peace and joy do not come to him who is proud of his intellect and learning; they come to him who is full of faith and has an undivided and single-pointed mind. *The intellect can produce many wonders, but non-violence is an atter of the heart.

It does not come through intellectual exercises. *Hatred is not overcome by hatred, but rather by love. This is an unalterable law. *Devotion is not mere worship with the lips. It is self-surrender with mind, action and speech. *Gandhi did not believe in the barriers created by religions, cultures, superstitions and mistrust. He taught and lived the brotherhood of all religions. *Gandhi believed in the art of living without concern for the fruits of one’s actions.

He practised not worrying about success or failure, but paid attention to the work at hand without feeling the slightest anxiety or fatigue. *In order to enjoy life one should not be selfishly attached to anything. Non-attachment means to have a pure motive and a correct means without any worry or desired result. He who gives up actions fails, but he who gives up the reward rises and is liberated. *Yoga is the complete reintegration of all the states of mind, the intellect, senses, emotions, instincts and every level of personality.

It is a process of becoming the whole. *One’s mantra becomes one’s staff of life and carries one through every ordeal. Each repetition has a new meaning and carries one nearer and nearer to God. It is capable of transforming that which is negative in the personality into that which is positive, and it can gradually integrate divided and opposing thoughts of deeper and deeper levels of consciousness. It is indeed an irony of fate that such an apostle of peace and non-violence was felled by a misguided assassin’s bullets in the Birla House in Delhi on January 30, 1948.

As aptly announced in a voice choked with grief and emotion by Jawaharlal Nehru, before the Constituent Assembly soon after the tragedy: “The Light is out”. The eminent authoress, Pearl S. Buck, described the assassination as “second Crucifixion”. Einstein remarked: “Generations to come will scarcely believe that such a person as Gandhi ever in flesh and blood walked upon this earth”. The statue of the Father of the Nation, sculpted by Ravi Shankar Patnaik of Andhra University, is located in a park opposite Tenneti Bhavanam, the administrative building of the Visakhapatnam Municipal Corporation. 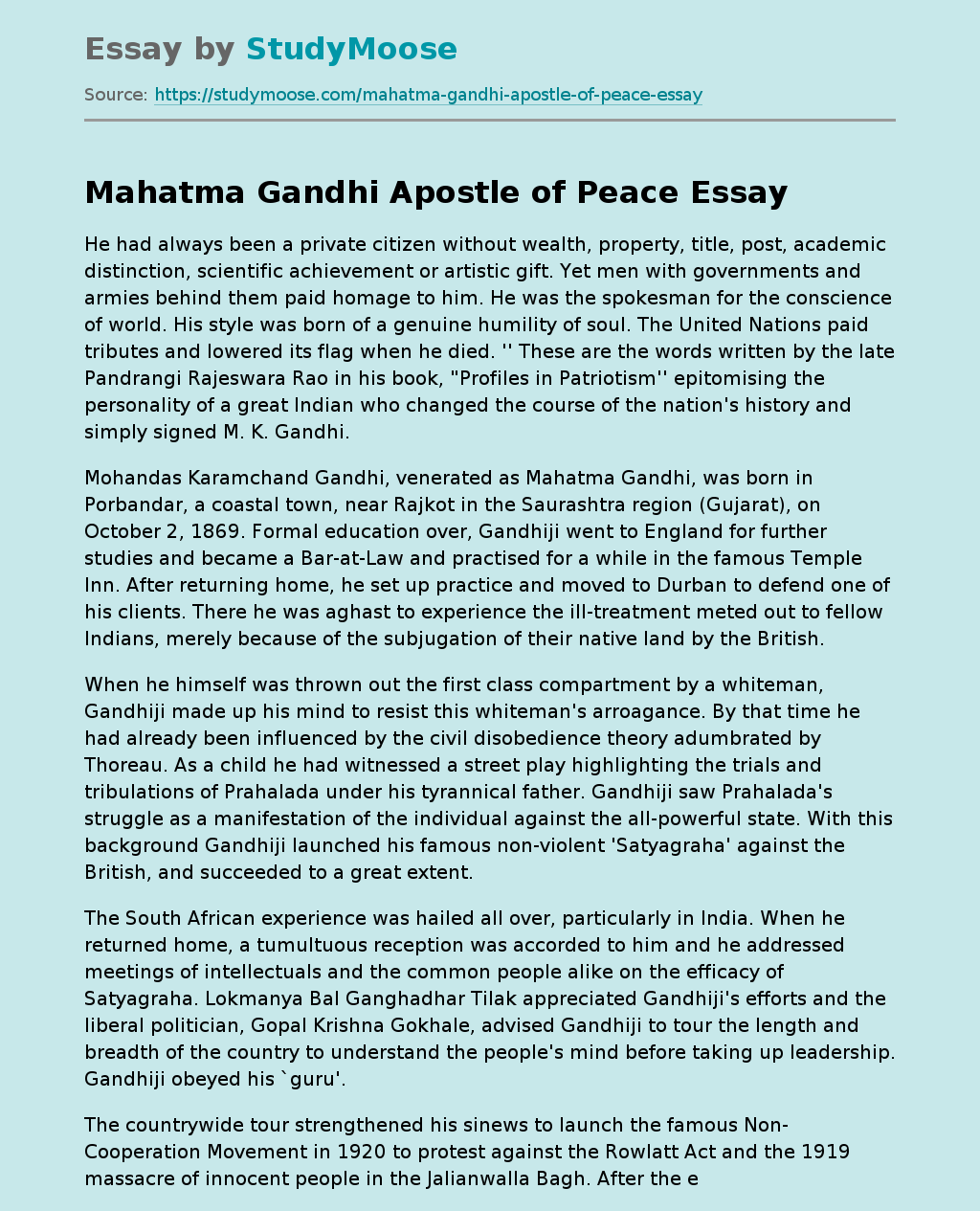