A discussion of the life and accomplishments of Mohandas Karamchand Gandhi

Throughout history most national heroes have been warriors, but Gandhi ended British rule over his native India without striking a single blow. A frail man, he devoted his life to peace and brotherhood in order to achieve social and political progress. Yet less than six months after his nonviolent resistance to British rule won independence for India, he was assassinated by a religious fanatic. Gandhi was one of the gentlest of men, a devout and almost mystical Hindu, but he had an iron core of determination.

Don't use plagiarized sources. Get your custom essay on
“ Gandhi as National Hero ”
Get custom paper
NEW! smart matching with writer

Nothing could change his convictions. This combination of traits made him the leader of India’s nationalist movement. Some observers called him a master politician. Others believed him a saint. To millions of Hindus he was their beloved Mahatma, meaning “great soul.” Mohandas Karamchand Gandhi was born on Oct. 2, 1869, in Porbandar, near Bombay. His family belonged to the Hindu merchant caste Vaisya. His father had been prime minister of several small native states.

Gandhi was married when he was only 13 years old. When he was 19 he defied custom by going abroad to study. He studied law at University College in London. Fellow students snubbed him because he was an Indian. In his lonely hours he studied philosophy. In his reading he discovered the principle of nonviolence as enunciated in Henry David Thoreau’s “Civil Disobedience,” and he was persuaded by John Ruskin’s plea to give up industrialism for farm life and traditional handicrafts ideals similar to many Hindu religious ideas.

Unsuccessful in Bombay, he went to South Africa in 1893. At Natal he was the first so-called “colored” lawyer admitted to the supreme court. He then built a large practice. His interest soon turned to the problem of fellow Indians who had come to South Africa as laborers. He had seen how they were treated as inferiors in India, in England, and then in South Africa. In 1894 he founded the Natal Indian Congress to agitate for Indian rights. Yet he remained loyal to the British Empire. In 1899, during the Boer War, he raised an ambulance corps and served the South African government. Read obituary of Gandhi

In 1906 he gave aid against the Zulu revolt. Later in 1906, however, Gandhi began his peaceful revolution. He declared he would go to jail or even die before obeying an anti-Asian law. Thousands of Indians joined him in this civil disobedience campaign. He was imprisoned twice. Yet in World War I he again organized an ambulance corps for the British before returning home to India in 1914. Gandhi’s writings and devout life won him a mass of Indian followers. They followed him almost blindly in his campaign for swaraj, or “home rule.” He worked to reconcile all classes and religious sects, especially Hindus and Muslims.

In 1919 he became a leader in the newly formed Indian National Congress political party. In 1920 he launched a noncooperation campaign against Britain, urging Indians to spin their own cotton and to boycott British goods, courts, and government. This led to his imprisonment from 1922 to 1924. In 1930, in protest of a salt tax, Gandhi led thousands of Indians on a extremely long march to the sea to make their own salt. Again he was jailed. In 1934 he retired as head of the party but remained its actual leader. Gradually he became convinced that India would receive no real freedom as long as it remained in the British Empire.

Early in World War II, he demanded immediate independence as India’s price for aiding Britain in the war. He was imprisoned for the third time, from 1942 to 1944. Gandhi’s victory came in 1947 when India won independence. The subcontinent split into two countries (India and Pakistan) and brought Hindu-Muslim riots. Again Gandhi turned to nonviolence, fasting until Delhi rioters pledged peace to him. On Jan. 30, 1948, while on his way to prayer in Delhi, Gandhi was killed by a Hindu who had been maddened by the Mahatma’s efforts to reconcile Hindus and Muslims. An epic motion picture based on his life won several Academy awards in 1983. 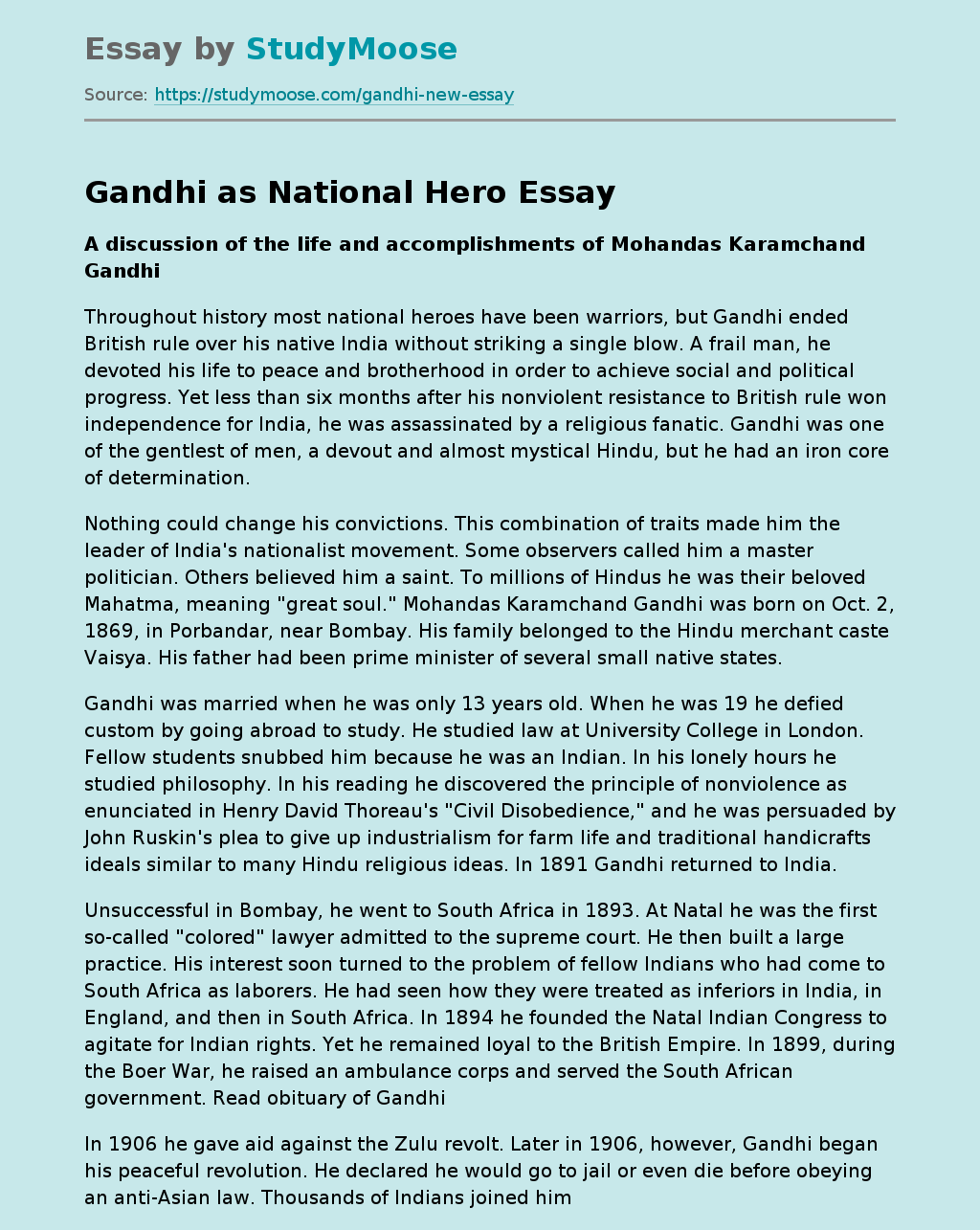