Machiavelli and Lau-Tzu about Leadership

How a leader leads his government plays a critical role in the success or failure of the government. There should be a strong leader for the government to reach its goal. If we go through history books and look for successful empires, communities, or countries, we will see the most potent societies had the best leadership qualities. There are many different ways to become a good leader, but what is the best one? Machiavelli in “the qualities of a prince “and Lau- Tzu in “thought from the Tao-te Ching” they both are trying to guide a leader to roll in the best way to achieve the best results for his people, his government and himself.

Don't use plagiarized sources. Get your custom essay on
“ Machiavelli and Lau-Tzu about Leadership ”
Get custom paper
NEW! smart matching with writer

Machiavelli was a philosopher, politician, which was born in Italy and he was living in renaissance time.

Lau- Tzu was an ancient philosopher from china with definite ideas about the master of the world.

Machiavelli showed the ways to become a powerful prince through examples and the histories of the past kings.

On the other hand, Lao was offered entirely different ways to become a great leader based on Tao.

If we start comparing their opinions about the war, we will see the have different views on it. Machiavelli believes war should be a profession of a prince. He suggested a prince think about war and preparing for it than spending time for personal luxuries . in “the qualities of the prince” he says “A prince, therefore, must not have any other object nor any other thought, nor must he take anything his profession but war.

” He suggested the prince train himself in the peacetime to be ready in the wartime. According to his ook h says, “He must, therefore, never raise his thought from the exercise of war, and in peacetime, he must train himself more than I time of war. This can be done in two ways. Oe by action, the other by the mind.”

On the other hand, Lao-tzu believes that war should be the last thing that a master should think about or do since it causes numerous loss of people during the war, either it causes victory or loses. He offers not to use weapons except when it’s necessary. He says,” Weapons are the tools of violence; all decent men detest them. Weapons are the tools of fear; an honest man will avoid them except in the direst necessity·peace is his highest value”. In contract, Lao Tzu believes human beings shouldn’t find pleasure in war , instead they should choose to avoid the conflict and he does not agree to prepare for war in the peacetime, as he said” there is no greater illusion than fear, no greater wrong than preparing to defend yourself, no greater misfortune than having an enemy”.

Machiavelli and Lau-Tzu have different ideas on the ways of using money. According to Machiavelli, a prince shouldn’t be worried about being called a miser. He can save his money to use on wartime and prevent his people from paying excessive taxes. However, he believes the prince should show generosity when it comes to controlling the property of others. In his book he says “A prince, therefore, unable to use this virtue of generosity in a manner which will not harm himself if he is known for it, should , if he is wise, not worry about being called a miser ; for with time he will come to be considered more generous once it is evident that, as a result of his parsimony, his income is sufficient, he can defend himself from anyone who makes war against him, and he can undertake enterprises without overburdening his people, so that he comes to be generous with all those from whom he gives nothing, who are countless , and miserly with all those from whom who gave nothing , who are few.”

On the other hand, Lao-tzu has a different idea, and he believes if the master is wealthy, his people will suffer from poverty. Moreover, also he offers not to spend money on weapons for war and not to charge for too much taxes. According to his book, he says “When rich speculators prosper While farmers lose their land; when government officials spend money on weapons instead of cures; when the upper class is extravagant and irresponsible while the poor have nowhere to turn-all this is robbery and chaos. It is not in keeping with the Tao.” He wants a leader to use his money on his people while Machiavelli says the leader needs to use the money on war and preparation for it.

They have different ideas about how and when a leader should be merciful. Machiavelli agrees that a prince should be cruel in the time that it’s needed. He believes the leader must desire to be considered compassionate, but he proposed him not to misuse his mercy because excessive mercy would harm the community. Extreme compassion would cause disorders and murder. He says, “it’s much safer to be feared than to be loved.” He agrees that showing cruelty would command his large army more efficiently.

In contrast, Lao Tzu asked a master not to be cruel to his people at all. In his opinion, the best master is the one who loved, and he says,” When the Master governs, the people are hardly aware that he exists. Next, best is a leader who is loved.”

Machiavelli believes the leader should be influential and have control over everything while Lau Tzu desires a government which everything runs its course.

Machiavelli believes if a prince is feared that is a better prince which the people obey him. He says “fear is held together by a dread of punishment which will never abandon you .” and he believes people can love their prince only in words, they offer their lives, and they pretend they are ready to do anything for their prince, but when it comes to action they are sorry, and run away and forget what they said. As he mentioned, love is held together by a chain of obligation.

On the other hand, Lautzo suggested a master be loved, and there shouldn’t be any forces on people . he incredibly agrees that a leader should follow his people’s needs and be like them and put himself lower than them. He says,” If you want to govern the people, you must place yourself below them. If you’re going to lead the people, you must learn how to follow them.”

Machiavelli and Lau-Tzu have extremely and strong ideas on how a leader should rule. Machiavelli believes “war” is the most important thing for a prince to think of and spend time on the strategies and studies the history to learn about other kings mistakes and victories. He believes it’s better to be feared than be loved. He suggested a prince be cruel if he should control his government and people. A prince, in his opinion, shouldn’t show too much generosity that causes people to take advantage of him. In Lau-Tzu’s ideal world, he is actively opposing the war and using weapons. He suggested the master follow his people and not to force them to do things. He believes the master needs to be loved by his people and offer the master to spend all his money on his people.

Machiavelli and Lau-Tzu about Leadership. (2019, Nov 14). Retrieved from http://studymoose.com/machiavelli-and-lau-tzu-about-leadership-essay 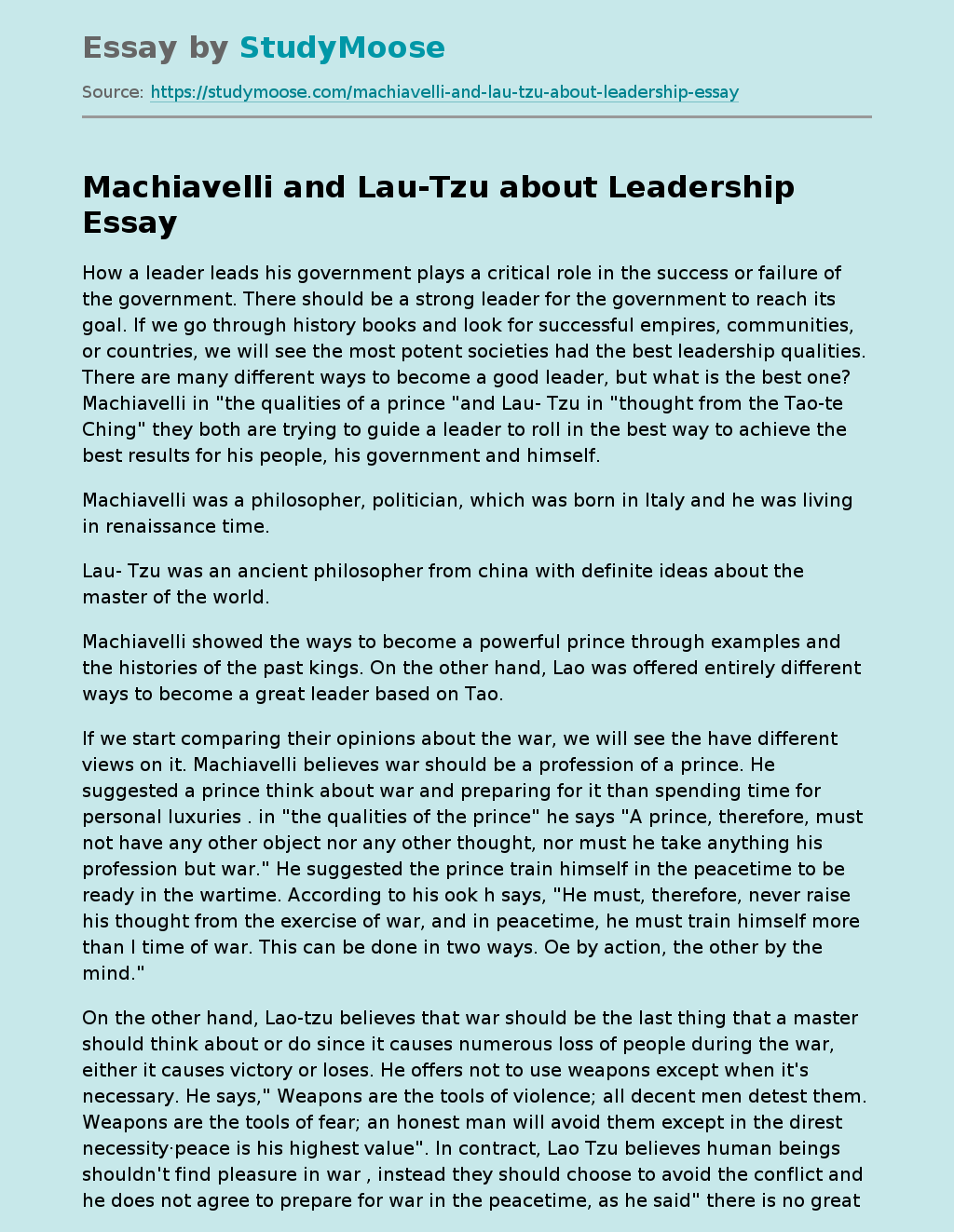