Mo-tzu (also called Mozi, Moz, or Micius in Latin) was a renowned philosopher in China back in about 390-470 B. C. during the time of the Hundred Schools Thought (Wikipedia, 2007). Having founded Mohism, he argued about the inadequacy of Confucianism and Daoism on the need for a mortal being to self-reflect and meditate upon oneself. He also insisted that, instead of rituals and singings, what human beings need are acts of authenticity that does not include the use of drums, zithers, and pipes.

Don't use plagiarized sources. Get your custom essay on
“ Mo-tzu’s Argument Against Music ”
Get custom paper
NEW! smart matching with writer

He, therefore, stressed out: “To have music is wrong” (Par. 1, Book VIII, Chapter XXXII). Main Body We all agreed that Mo-tzu presented a very well thought of argument against music. This can be seen when he stated, Although the body knows they are comfortable, the mouth knows they are gratifying, the eyes know they are delightful, and the ears know they are pleasing, yet they are found not to be in accordance with the deeds of the sage-kings of antiquity and not to contribute to the benefits of the people at present.

In saying this, he implied that music did not have anything to do with the greatness and success of the sage-kings… that it did not fulfill the basic needs, unlike the boats and the carts that were built from the same contribution of the ancient citizens. It slowed production by wasting labor on things that are of no use. He stated, The levy of heavy taxes on the people to construct the big bell, the sounding drum, the ch’in and the she, and the yY and the sheng, is not at all helpful in the endeavor to procure the benefits of the world and destroy its calamities.

In fact, as compared to music, philosophy presents greater cause for men to think deeply, and run into sickness and chaos (with oneself or with the society) that, in turn, makes them more prone to hunger, to state of undress, and to unrest. What philosophy has failed to give men, music could give with just a stroke or a beat of the instruments. True, musical instruments cannot be directly eaten and cannot cloth the naked, yet the instruments were also considered treasures in the long ago, which means that the owners could sell it for a chance to buy food or clothing in exchange of the musical instruments.

When it comes to giving rest, however, music has the capability to give rest to those who are bothered psychologically or biologically. Philosophy, on the other hand, cannot be exchanged for food, clothing, or rest, since it all runs in the mind of the wise men. Thinking about the statements of the wise will just make men hungrier, poorer with less clothing, and more troubled. I, therefore, stress out—to have philosophy is totally wrong! Conclusion

Music comes from the mind just as philosophy comes from the mind. The only difference is that philosophy centers on chosen beings—those who are more gifted and wise—than when compared to music, which is so ordinary and can be expressed by anyone who dreams of expressing himself. Yet they both come from the mind. Even if both have their own sides of gains, both are totally incapable of destroying calamities. 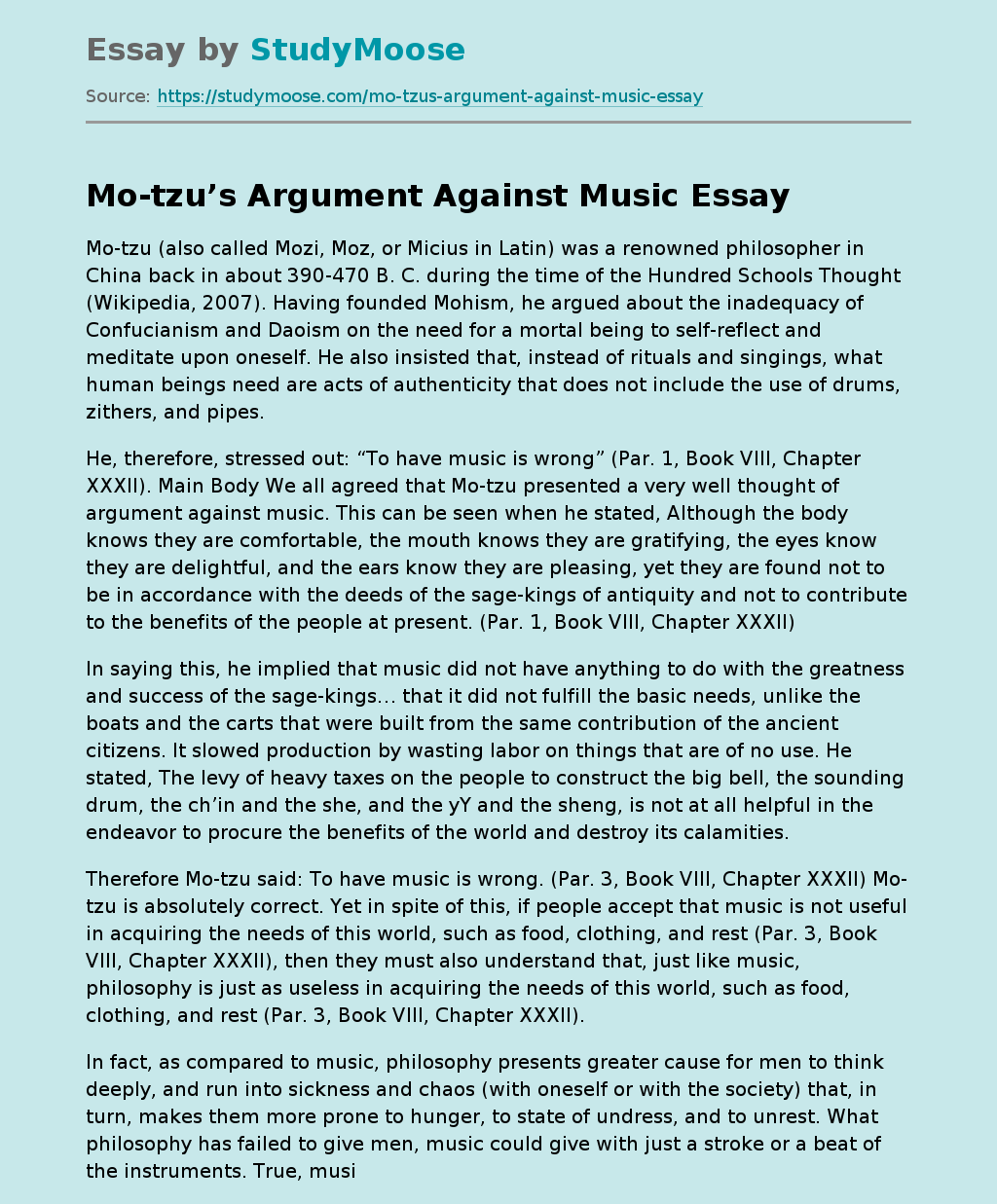