Macbeth is by far the bloodiest of William Shakespeare’s plays. It begins with a civil war battle between the Scottish and Norwegian army, where Macbeth embodies his heroic and courageous figure. However, Macbeth eventually transforms into a villain, who murders the innocent with a lust for power. For the most part, blood is symbolic of violence and destruction. The frequent repetition of this imagery represents the murder, and the emotion following the murder, which is guilt. Shakespeare uses imagery of blood throughout the play to exemplify and express the guilt of Macbeth and Lady Macbeth after their deeds.

Don't use plagiarized sources. Get your custom essay on
“ Macbeth: The Bloodbath ”
Get custom paper
NEW! smart matching with writer

After each murder, the act of guilt and regret increases. However, Macbeth soon accepts the fact that he will never be the same after murdering Duncan, which hardens him. Since he will never be the good captain he was at the civil war, he goes on killing left and right. Shakespeare’s nuance use of blood imagery traces Macbeth’s moral transformation from good to evil.

Though Macbeth is known as an evil figure throughout the play, him as the heroic captain towards the beginning exemplifies the good character he could have been. During the civil war, Macbeth is known as a wounded captain who performs an action that is unlike him through the rest of the book. After Macbeth completes his good deed, he says, “For brave Macbeth (well he deserves that name), / Disdaining Fortune, with his brandished steel, / Which smoked with bloody execution” (1.2.18-20). Macbeth has killed Macdonwald, a leader of the Norwegian forces fighting the Scottish.

The blood that pours out of Macdonwald’s flesh represents good blood. The murder is for the sake of Scotland, which brings peace and victory. As a result of victory, Macbeth is given a new title: “Go, pronounce his present / death, / And with his former title greet Macbeth” (1.3.74-6). Duncan has given the title of Thane of Cawdor to Macbeth. However, this victory is very much the beginning of Macbeth’s downfall because of his gradual lust for power.

Although guilt and regret express Macbeth’s concern for the deeds he has done, he soon accepts the fact that he will never be the same after Duncan’s murder. The good blood that is shed after the murder of Macdonwald is the only good blood in the play. After Macbeth murders Duncan, he begins to realize that he will never be the same, “Will all great Neptune’s ocean wash this blood / Clean from my hand? No, this my hand will rather / The multitudinous seas incarnadine” (2.2.78-80). The blood imagery represents his life changing forever because the blood of Duncan (the murder) will never go away. Not even Neptune, the God of the sea can wash it away. This murder is used for only Macbeth’s benefit, which sheds bad blood. In addition, the blood imagery also epitomizes the guilt and regret that follows the murder. Macbeth has now dug himself in a hole that is nearly impossible to get out. After the death of Banquo, there are a series of times where Macbeth meets the ghost of Banquo.

Once Macbeth sees him for the second time, he says, “I am in blood / Stepped in so far that, should I wade no more, / Returning were as tedious as go o’er” (3.4.168-170). Macbeth says that he might as well continue killing because he has nothing to lose. It is like he is an evil, immortal killing machine that will not stop. He has already killed Duncan, Banquo, and will soon kill the family of Macduff. Moreover, Macbeth is regretting his crimes because he thinks about returning to his old self. Though Macbeth seems to love Lady Macbeth unconditionally, blood and murder has brainwashed him so much, that her death does not even faze him. Lady Macbeth is the reason for the start of Macbeth’s downfall. Furthermore, she brainwashed, taunted, and persuaded him to kill Duncan, which led to his collapse. After Macbeth hears about the cry of his woman, he says, “I have supped full with horrors, / Direness, familiar to my slaughterhouse thoughts, / Cannot once start me” (5.5.15-17).

Macbeth exemplifies his decline and is not bothered by this cry because he has experienced his own bloody terrors. Murder and blood has scarred his life forever, ruining his relationship with his wife. During the final face off between Macbeth and Macduff, Macbeth says, “But get thee back. My soul is too much charged / With blood of thine already” (5.8.6-7). The blood imagery represents each and every one of his murders in the past. Furthermore, Macbeth admits his burdens to Macduff and is reluctant to fight him. Macbeth is conscious that he has already killed his family and is sure of killing him too if they fight. As a result, Macbeth is the one drowning in his own blood by the blade of Macduff.

Shakespeare uses blood imagery to ultimately stress the overwhelming guilt and regret that Macbeth feels after each murder. It is like a reminder of the wicked crimes that have been committed. In addition, blood imagery guides the reader through Macbeth’s path and transformation from good to evil and his downfall. Blood and murder blind Macbeth from what is and was most important to him at the start; Lady Macbeth. It is almost as if his life tarnished and is meaningless as more blood piles on throughout the play. After Duncan’s death, his mind revolves solely around his lust for power, which leads to his downfall. 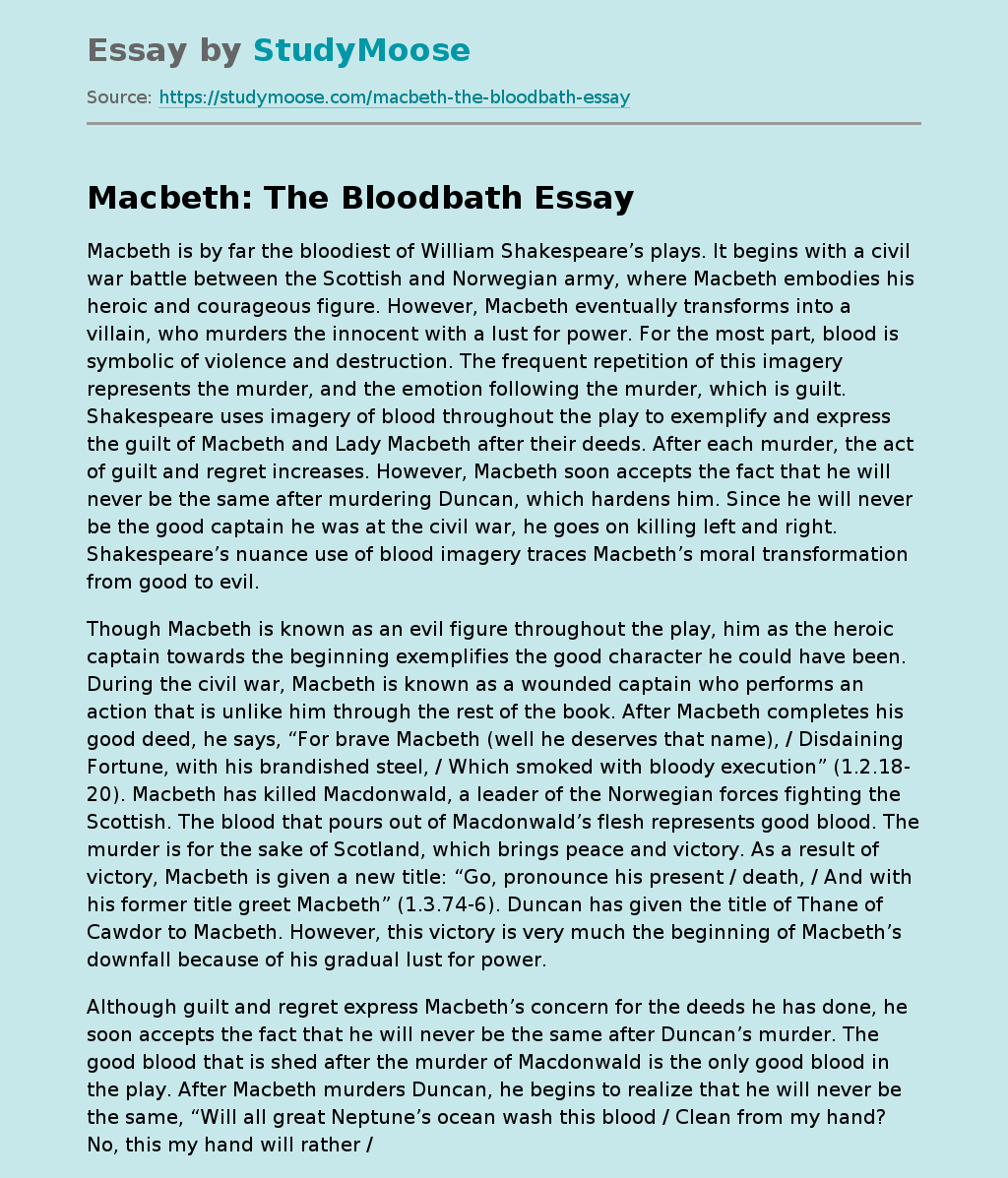