A discussion of Shakespeare’s “Macbeth”, focussing on Macbeth as a tragic hero.

Macbeth One might choose to assent to the statement, “Macbeth is a tragic hero.” This conclusion may be based upon certain characteristics , proposed by Aristotle, that warrants him worthy of such a title. Aristotle stated that a tragic hero must be of certain qualities: a man of noble stature, good, though not perfect, have a fall that results from committing an act of injustice, which is his own fault, and receive a punishment that exceeds the crime.

Don't use plagiarized sources. Get your custom essay on
“ Essay About Macbeth ”
Get custom paper
NEW! smart matching with writer

A tragic hero is one of noble stature, and is good. Macbeth is known as the Thane of Cawdor. He receives this honor because he has just returned from a military success that has covered him in glory. Macbeth can be considered “good” at the start of the work. He is good, although he is not perfect. He has a good heart and is in a keen state of mind before he hears the witches’ prophecy.

Macbeth does not begin to become evil until he is convinced to act on the prophecy by Lady Macbeth. Lady Macbeth is the evil one who poisons Macbeth’s mind; although, she is only encouraging her husband to do what she feels is in his best interest. The hero’s downfall is his own fault, the result of his own free choice, not the result of an accident or fate. An accident and/or fate may be a contributing factor in the hero’s downfall, but are not alone responsible.

Macbeth’s downfall is entirely his fault. He chose to listen to the witches’ prophecy. Banquo heard the same prophecy, but chose not to allow himself to be duped. Macbeth could have done the same thing. He, instead, chose to accept the prophecy and act upon it. Macbeth spends most of the play in moral indecision. Lady Macbeth encourages him, but it is he that chooses his actions. A tragic hero’s misfortune is not wholly deserved. The punishment exceeds the crime. Macbeth does not totally deserve to die as a result of these incidents. He begins the work as a good man, but later declines because of the desires of his wife, and bad choices. Macbeth does not want to kill anyone, but does it. He is a person of greatness, but is also of weakness. In the beginning he is “better than ourselves.” Macbeth’s death may not be considered a total loss because knowledge is gained before he dies. Aristotle says that there is some “discovery”, a change from ignorance to knowledge. In conclusion, Macbeth can be described as “tragic hero” because he possesses the characteristics that are required by Aristotle. Macbeth is of nobility, is good, though not perfect, experiences a downfall that is his own fault, has a misfortune that is now wholly deserved, and receives a punishment that exceeds the crime. 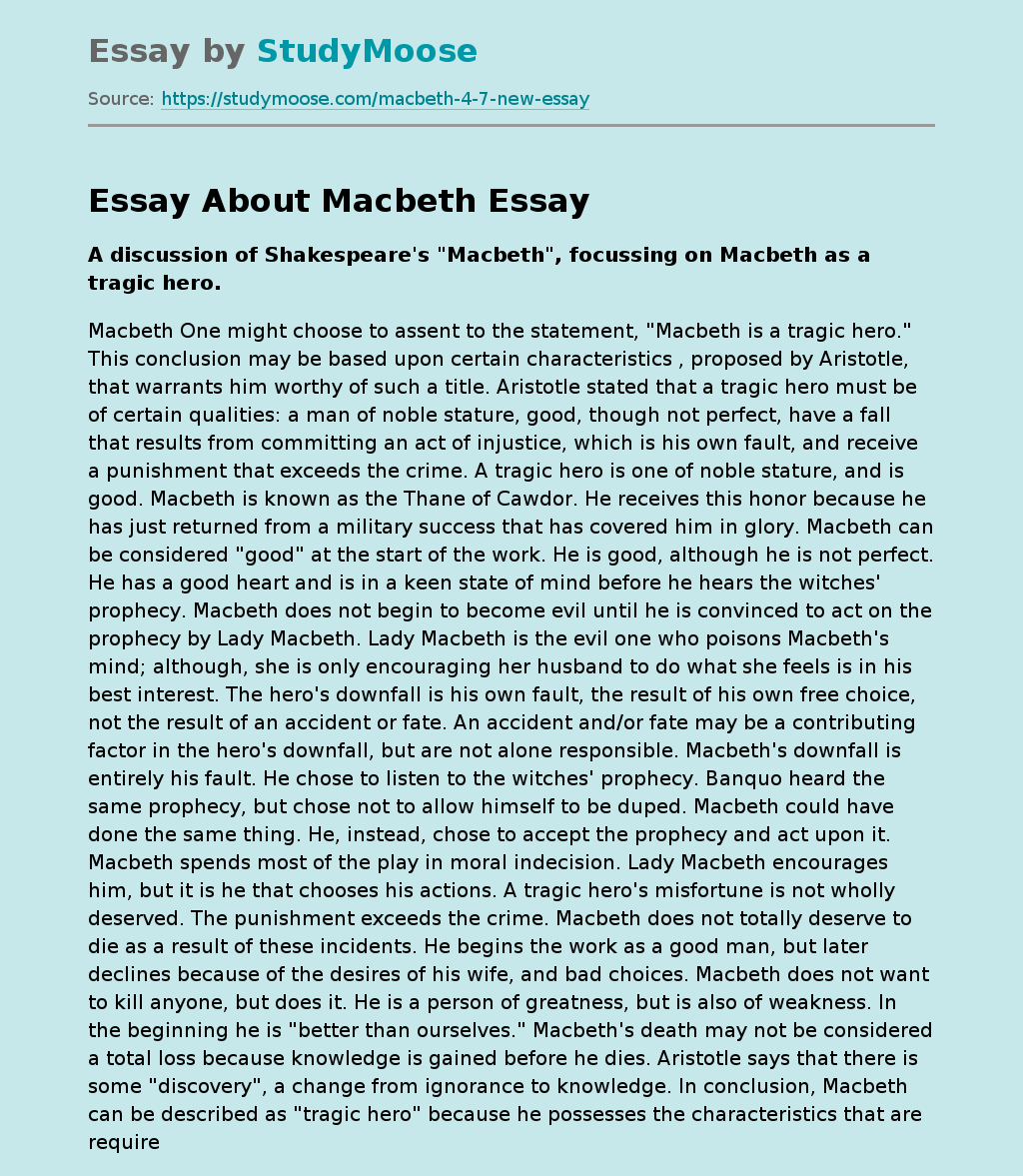