Lying to a NCO

The reason why I am writing this five hundred word essay is because I know I messed up and disobeyed a lawful order from a noncommissioned officer. So here are some of the reason on why you shouldn’t lie to a non-commission officer. For one you can receive actions under uniform code of military justice. This can be found in article 107 which deals with false official statements. This can land you with an article 15 that can come along with up to forty five days of extra duty which includes reporting to battalion and charge of quarters/cq, loss of pay and can take up to multiple ranks.

Don't use plagiarized sources. Get your custom essay on
“ Lying to a NCO ”
Get custom paper
NEW! smart matching with writer

That can involve mopping, sweeping, wiping down windows and anything else possible in the barracks along with doing police calls in all the battalion’s parking lots. Secondly it comprises the integrity within the company, platoon, squad, or team that can end up affecting us all.

Integrity is adherence to moral and ethical principles; soundness of moral character; honesty.

Integrity also happens to be in your army values which are a great standard for you to set for yourself that way you’ve got some kind of standard to hold yourself to. The ways that integrity affects your company is because if your first sergeant has no integrity then how can you trust him to lead a company in to war. It works kind of the same way for your platoon because if you can trust a platoon sergeant you’re probably not going to want to be in that platoon and go somewhere else.

The way that it works if you don’t happen to have integrity in your squad is that you’re probably going to doubt everything that your squad leader says and his abilities on the battlefield.

Integrity in a team is the most important because not having integrity in a team can ruin everything. Your pretty much one big family and have to be able to trust the people in your team to watch your back because that’s going to be the people that are the closes to you when you get deployed. And if you don’t trust your team leader you will question all of his decisions that he makes while controlling the team and then you’re going to question whether or not that he’s actually capable of being a team leader and have doubts. Which when you start to have doubts you’re not going to be worried about do your job while in combat because you’re going to have other stuff on your mind and then that can get you or your battle buddies hurt or worse. And last but not least lying is a form of disrespect and disrespecting a noncommissioned officer can be referred to in article 91 which covers Insubordinate conduct toward warrant officers, NCO, 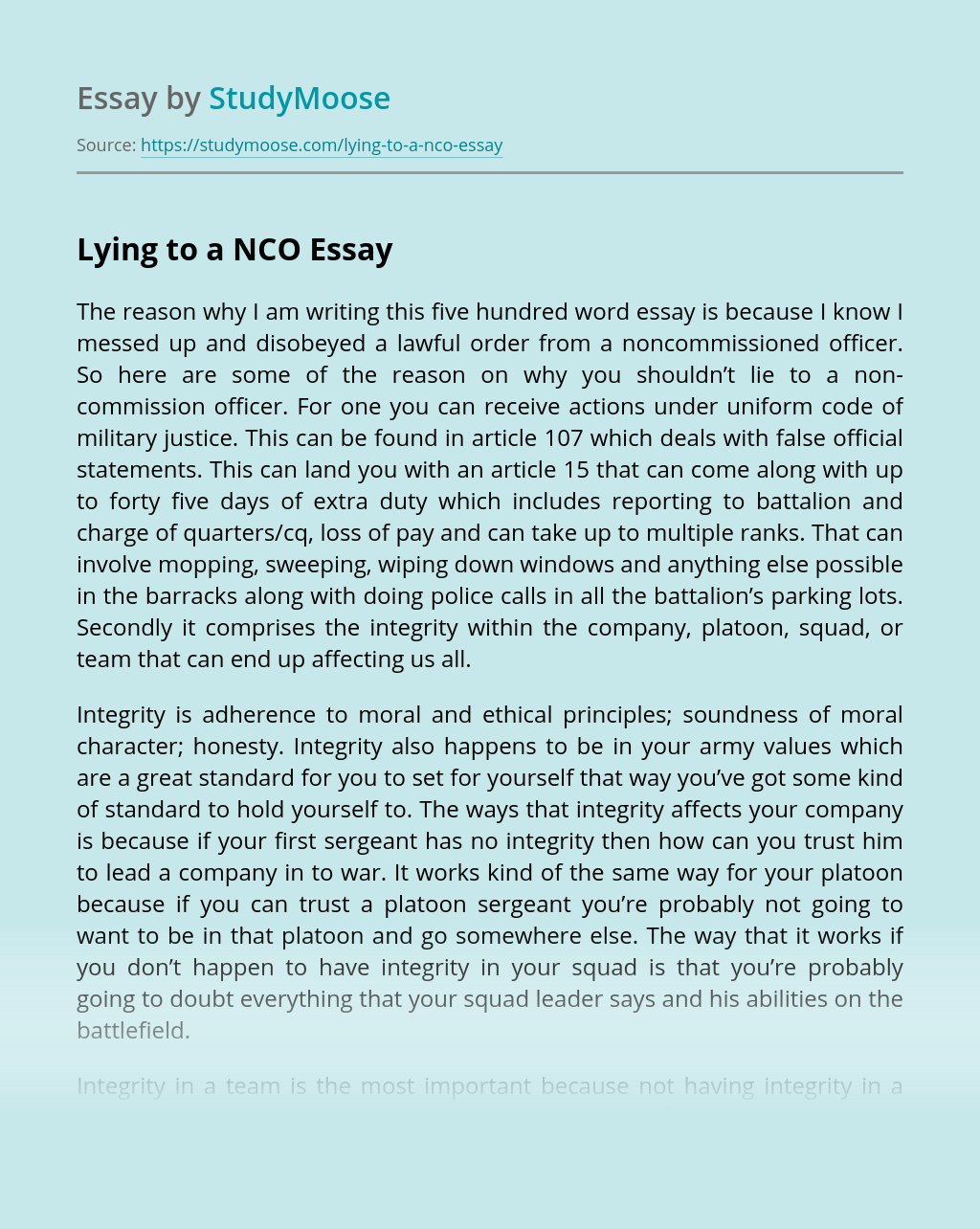