Integrity in to Kill a Mockingbird

Integrity is having a standard of morals and ethics, and living by them. It is a willingness and ability to do the right thing even when it is hard. The story To Kill a Mockingbird is filled with integrity. For example, many of the people in Maycomb share a prejudiced sense of integrity when it comes to its racist views. However, it is Atticus Finch’s integrity throughout the novel that really embodies the idea of moral and ethical principles. He puts into action every moral idea that he supports.

Atticus is a role model to not only his children, but to the whole town of Maycomb, and his integrity is a great part of what makes him such a good example. Integrity breeds integrity. Harper Lee is suggesting that integrity within ourselves helps others to have integrity. Atticus brought up Jem and Scout by example.

His show of integrity instilled within his children their own sense of integrity. Both Jem and Scout are exposed to experiences throughout the novel their shape their perception of right and wrong.

For example, Atticus took up the case of Tom Robinson not only because he had to, but because he was fighting for an innocent life against injustice and racial prejudice. His display of integrity in Tom Robinson’s case was reflected onto his children. They soon came to know their father as a hero full of moral courage, and did their best to do him right in their own ways. Though they could have fought against their peers insults against them and Atticus, they showed adversity by not reciprocating.

“As it was, we were compelled to hold our heads high and be, respectively, a gentlemen and a lady.”(Lee, pg. 247)

Furthermore, Scout shows integrity through her wisdom and compassion that goes beyond her years. Atticus is a strong role model to his children with his strong sense of integrity, and Scout and Jem develop their own integrity throughout To Kill a Mockingbird with his lead. Atticus’s integrity extends not only to his family, but to the whole community of Maycomb. The community of Maycomb was heartedly against Atticus defending Tom Robinson, a black man. Yet, once again, Atticus’s integrity shines through as he stands strong through the adversity.

During the trial, Atticus speaks firmly of the truth, and forces Maycomb to examine their conception of race and the equality of man. As Christians, they know that all men were equal. As Atticus finishes his speech, he says “In the name of god, believe him [Tom Robinson]” (Lee, Pg. 209). In saying this, he is reminding the jury of this integrity they are supposed to uphold. Though Maycomb convicted Tom Robinson, as Miss Maudie said “We’re making a step-it’s just a baby-step, but it’s a step.” (Lee, Pg.220) She is referring to the fact that Atticus had been able to force the jury to examine their views of race, as they were kept out so long. In this way, Atticus’s integrity got to every person of Maycomb.

Another example is when Reverend Sykes says to Scout “Miss Jean Louise, stand up, your father’s passin’.”(Lee, Pg 215) Reverend Sykes is demonstrating his respect for Atticus by telling Scout to show the same respect. Atticus’s integrity had a strong impact on the black community of Maycomb, and they demonstrated a great deal of their own integrity because of him. Atticus’s integrity reflects onto all of Maycomb county’s citizens. Today’s society can easily relate to the pressures on the individual’s and community’s integrity that is found in the novel To Kill a Mockingbird. Every day peer pressure instils within us the desire to be bigger and better than what we are. The media, how other’s view us, and the pressure put on us by others will all test our integrity on a daily basis.

Atticus and his children both had to deal with the adversity against them because of the communities differences in opinion. They kept their integrity through it all with Jem and scout having their father’s moral advice and support to help them. Though many succumb to the pressures put on us, there are also many Atticus’s out there that have a moral and ethical conscience backing them up. They become a role model that breeds integrity through their moral practices. “Before I can live with other folks I’ve got to live with myself. The one thing that doesn’t abide by majority rule is a person’s conscience.” (Lee, pg.108)

To conclude, Atticus is a strong moral figure in the book To Kill a Mockingbird that demonstrates the quality of integrity to the fullest. His integrity helps others to have integrity. To explain, Atticus instils a strong sense of integrity within his children by teaching them by example. Furthermore, his example of integrity also extends to the community of Maycomb, as Atticus forces them to reflect upon their prejudiced racial views. We ourselves are every day tested with our own integrity, and the Atticus’s of the world and in ourselves can help strengthen our moral values. All in all, Integrity within ourselves helps others to have integrity.

Integrity in to Kill a Mockingbird. (2017, Apr 02). Retrieved from https://studymoose.com/integrity-in-to-kill-a-mockingbird-essay 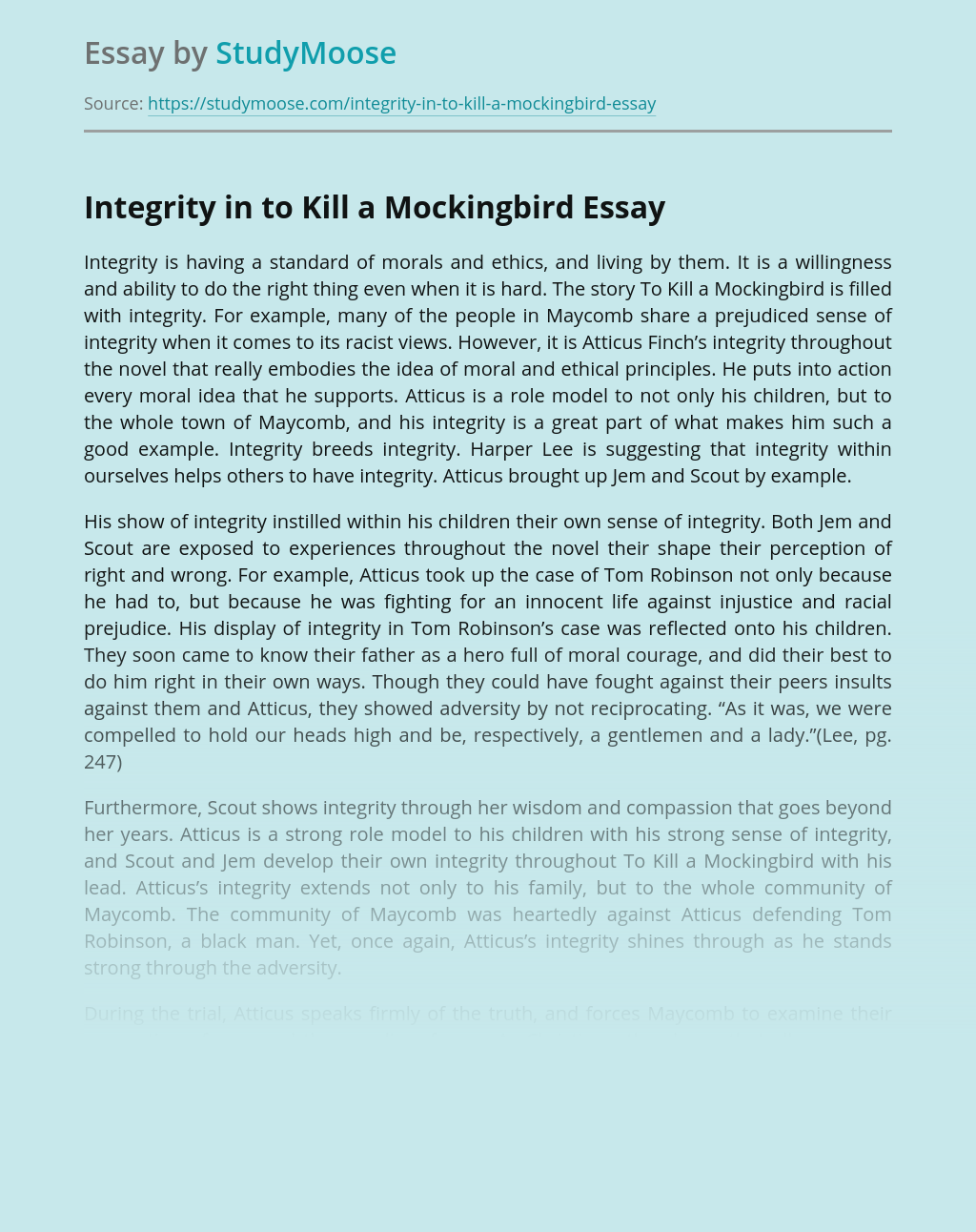 Atticus Finch as a Moral Character

Throughout literature, there are numerous examples of characters who serve to reinforce moral values of both other characters, and the reader. These characters consistently choose to do the “right” thing in the face of severe adversity. For example, in the Parable of the Good Samaritan, the Samaritan man goes against all societal values to help...

Courage (To Kill A Mockingbird)

Get Essay
Innocence Within To Kill a Mockingbird

Essay about Courage in to Kill a Mockingbird

One likes to think of a hero, as strong, brave, and meeting all challenges head on. All the characters in this book have a different view as to what courage is, and they all show it in different ways through their everyday lives. Younger characters, like Jem and Scout, see the physical aspect of it,...

In the Novel ‘To Kill a Mockingbird’, Atticus Finch is portrayed as a truly unique individual. Atticus is a morally bound intelligent lawyer who believes in true justice for all. As a father, he puts a lot of emphasis on being an excellent role model for his children. The acts of heroism displayed by Atticus...

Defining a Hero: Harper Lee’s To Kill a Mockingbird and Atticus Finch’s Heroism

The definition of a hero is varied and intricate. While there are certain types of heroism such as altruistic heroism, or other machismo bravado this paper will seek to find a definition to the specific heroism as exhibited in Harper Lee’s character Atticus Finch in To Kill a Mockingbird. A discussion of the definition of...

Racism is human nature; it is hardwired into our brains. Prejudice has existed for as long as humans have; it’s almost like an instinct. Fortunately, this is false, discrimination is not part of human nature. However, this is what it seems like in Harper Lee’s To Kill a Mockingbird, a classic novel that is both...

To Kill a Mockingbird Moral

The depth behind this novel is too see how Scout has progressed throughout the course of two years. Slowly but surely, she realizes the life lessons that have been waiting for her all along. She does this with the help of her family and her community. One man importantly sticks out the most, and his...