Lord of the Flies Text Response

In Lord of the Flies, William Golding presents a harsh yet realistic view of the individual, namely that within each person there is a struggle between right and wrong. Initially the boys listen to their consciences and act according to the rules they were taught during their upbringing. They set rules, allocate jobs, and democratically elect a leader just like in today’s society. As time goes by, boys such as the elected leader Ralph, the rational Piggy and the kind Simon manage to remain disciplined, but others indulge and let their morals decay little by little, particularly the proud Jack and his group of hunters who are ambitious and only thrive from mutilated power.

Turn in your highest-quality paper
Get a qualified writer to help you with
“ Lord of the Flies Text Response ”
Get high-quality paper
NEW! AI matching with writers

In today’s disciplined and efficient society, there are laws that we all have to abide by. When Ralph blew the delicate, white conch everyone followed and listened.

The conch represented power, order and law and with that in his hand, Ralph was elected leader. Ralph with the help of Piggy and his glasses which signified knowledge and insight were able to govern the island and the small group of troubled individuals for a short while.

They kept the fire going, built shelters, hunted for food and collected water, the basic requirements needed for humans to survive. They built an efficient monarchy that was sustainable but only by the collected help of everyone on the island could they keep this sustainable way of life going. We all fight for something we really want, whether we are fighting for the title to be the school leader, or to be the president of the United States.

In the novel Lord of the Flies, Jack was a follower, Ralph was elected leader and he was compliant with that decision. He was ambitious and selfish, all he wanted was power for himself and if he couldn’t achieve that, he was willing to take it by force. He had himself war painted and that revealed his true inner self, a savage. Once a person has given up hope of getting something morally, he turns to other approaches. After Piggy’s glasses were broken, all knowledge and insight was lost and hell broke loose.

In Lord of the Flies William Golding conducts a sociological thought experiment. He takes a group of young boys and places them on a deserted island and asks what will the result be, a utopia or a dystopia? His answer is the latter. His reason is man himself. “Ralph wept for the end of innocence, the darkness of man’s heart, and the fall through the air of the true, wise friend called Piggy” Innocence is not stripped, it is surrendered, Lord of the flies is an allegory for society at large.

Lord of the Flies Text Response. (2017, Jan 11). Retrieved from http://studymoose.com/lord-of-the-flies-text-response-essay 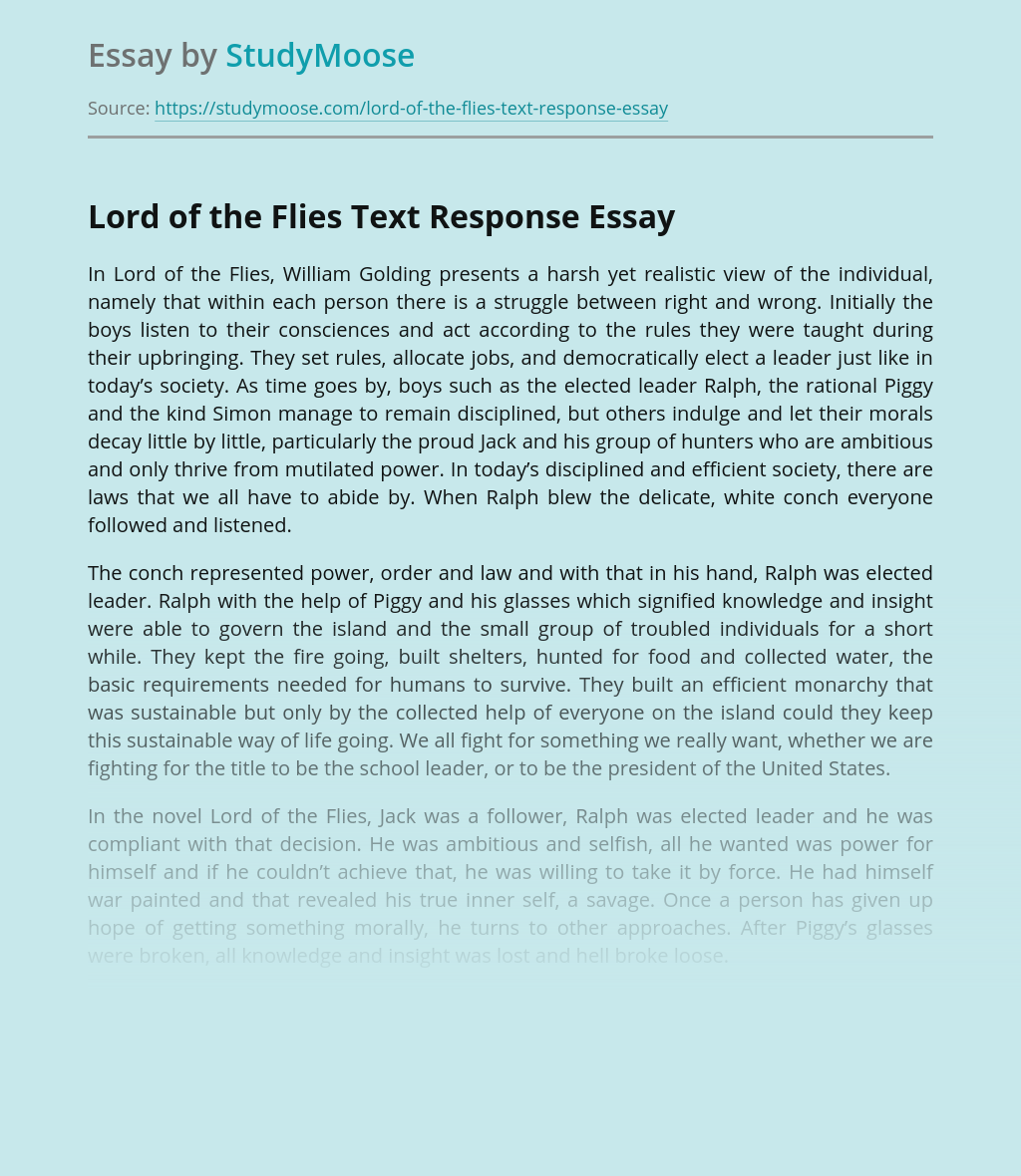 Turn in your highest-quality paper
Get a qualified writer to help you with
“ Lord of the Flies Text Response ”
Get high-quality paper
Helping students since 2015
Stay Safe, Stay Original