How Does Golding Present Simon in Lord of the Flies-What Is His Role? Essay

William Goldings “Lord of the flies”, portrays a group of boys who find themselves stranded on a desert island in a deep battle between civilisation and primitive savagery. One of the boys portrayed, Simon, a boy who is kind and physically fragile expresses a deeper knowledge of the problems on the island that the other boys are unaware of. There are many differing viewpoints on his role in the novel. One of these is that he is a biblical parallel; Simon portrays a saintly figure, and shows many of the qualities demonstrated by Jesus Christ.

Don't use plagiarized sources.
Get Your Custom Essay on How Does Golding Present Simon in Lord of the Flies-What Is His Role? Just from $13,9/Page

He demonstrates a strong connection with nature throughout, and also is shown to be a character of strong goodwill and kindness.

One of the reasons Simon is often thought of as a biblical parallel to Jesus Christ is because of his encounter with “The beast”, which shows a strong resemblance to Jesus’ 40 days in the desert, in which he encountered the Devil and was tempted by him to leave his mission.

In “Lord of the Flies”, Simon meets the beast during an epileptic fit. His mind, or the Beast tells him “We are going to have fun on this island…so don’t try it on…”. Simon is being told that he must not tell the others what he knows, that they must have fun and Simon must not interfere, but he must just “run off and play”. The name “Lord of the Flies” is a translation of a word thought to mean a powerful demon, or the devil himself. This shows that Simon may have represented Jesus in the novel.

Simon’s death also shows resemblance to that of Jesus, which shows us that Simon may be Christ’s representation in the novel. ‘Simon was crying out something of a dead man on a hill. ‘ This imagery is displayed just before Simon is mercilessly slaughtered by the other boys, a direct link to the image of Jesus’ crucifixion on the top of a hill. After Christ was killed, it was said that ‘There was darkness over all the land…and the earth did quake, and the rocks rent.’ These supernatural biblical descriptions recount the solar eclipse and the earthquake which took place after Jesus’ death. This relates to the death of Simon; ‘The clouds opened and let down the rain like a waterfall’, signifying his death. When Jesus was crucified, he died to save mankind. This relates to Simon confronting the figure on the mountaintop. When he died “the parachute took the figure forward…and bumped it out to sea”.

When Simon died, the dead air pilot was finally released from his purgatorial state on the island, and as Jesus died and salvaged mankind, Simon died and exorcised the soul who lingered between life and death, and between heaven and hell. This shows us that Simon had many strong parallels with Jesus and may have been his biblical parallel in the novel. Simon is a representation of hope and innocence on the island, and has a strong and vital connection with nature. In the novel, Simon has a special place in the forest where he can go and sit alone, at one with his surroundings. “The sunlight pelted down and the butterflies danced.” This description indicates that this place where Simon often resides is almost paradisiacal, and Simon is able to appreciate the true beauty of the island; it’s beauty is not thwarted by his presence, as it is with the other boys. Simon has a strong connection with the island and with nature itself. Simon is able to see the true beauty in the things that others cannot. The ‘creepers’, which had once hindered the boys and were previously referred to as ‘snake-like’, aid him and form ‘a large mat’.

This shows his unity with nature. When Simon ventures into the forest the white ‘candle buds’ open themselves up, which and returned to peaceful place that he came from. Simon is connected with nature throughout the novel, but is only truly at one with it when he dies. The body of the dead airman being pulled out to sea could also symbolise Simons soul being finally released from the confines of life and returning to nature where it belongs. Simon’s true sense of pure goodwill is first demonstrated in his expressed concern for the more vulnerable boys. He help the littluns to get fruit, and ‘pulled off the choicest from up in the foliage, passed them back down to the endless, outstretched hands’. He also helps Piggy to get his glasses back when Jack has knocked them off, showing that he does not discriminate against Piggy because he is different but chooses to help him, even if this may cause him to suffer in the future.

These may indicate that Simon, though other characters may be thought of as “good” and kind, such as Piggy or Ralph, Simon shows no flaws at all. Simon possesses a deep knowledge and understanding about the truth of the island and the beast of which the other boys know not. He also seems to posses many mystic qualities. He is the first to understand truly that the beast is not a physical or material being, but something that lives within the boys. Unlike piggy or Ralph, who are able to appreciate adult knowledge and understanding, Simon possesses the ability to see the darker side of knowledge. For Simon, the eyes of the Pig’s head on the stick are “dim with the infinite cynicism of adult life”, meaning that adults believe nothing is ideal, therefore his realisation in itself is cynical– the beast lives within the children, making Simon distrust the human nature. He knows the truth but is unable to get it across to the other boys; “Simon became inarticulate in his effort to express mankind’s’ essential illness”. Simon understands the truth behind the beast- that the beast itself thrives within the boys, is not something living that can be hunted, but is mankind’s “essential illness”, the evil that lurks within all men, waiting to be released.

The fact that Simon is “inarticulate” shows that he is unable to express the truth to the others, and even if he had, the boys would not have listened or cared. His death relates to the elements- his knowledge is elemental . Golding shows us the significance of his death by shifting the focus from the movements of Simon’s body to the movements of the sun, the moon and the stars, inciting that Simon’s knowledge was as essential as the elements themselves. However, even though he is portrayed as a weak character right from the beginning, Simon is much braver than he seems; he is the one who climbs the mountain to encounter “the beast”, at which he discovers that the beast is not material. Simon possesses a number of mystical qualities, such as his pathetic abilities. Simon prophesizes to Ralph “you’ll get back to where you came from”, almost indicating that he may not. Simon foresees his own death and predicts that Ralph will return home.

Another way in which Simon’s mystical qualities are shown is when he asks the other boys rhetorical questions which require much thought to answer, such as “what is the dirtiest thing there is?” All of these indicate that Simon is a mystic and possesses a much deeper and darker knowledge than the other boys. To conclude, Golding’s presentation of Simon shows us his biblical parallel with Jesus and his significant unity with nature, which lets Simon see the true beauty of the island where others cannot, indicating that it is not the island that is against them but that the boys are against the island, truly centralised around destruction and savagery.

He represents Hope and bravery and has a deep and perhaps dark knowledge, which enables him to perceive the truth much more clearly than the other boys. He also has a flawless good will. This shows us that Simon’s true role in the novel was that he alone had the power to save the boys from themselves, for he alone had the knowledge of the beast’s true nature. Simon was killed because of this, however he was killed as the beast – yet it is ironic that he said the beast was “only us”. Simon was the least beast-like, which makes one wonder whether him being less savage makes him more or less human.

How Does Golding Present Simon in Lord of the Flies-What Is His Role?. (2016, Oct 14). Retrieved from https://studymoose.com/how-does-golding-present-simon-in-lord-of-the-flies-what-is-his-role-essay 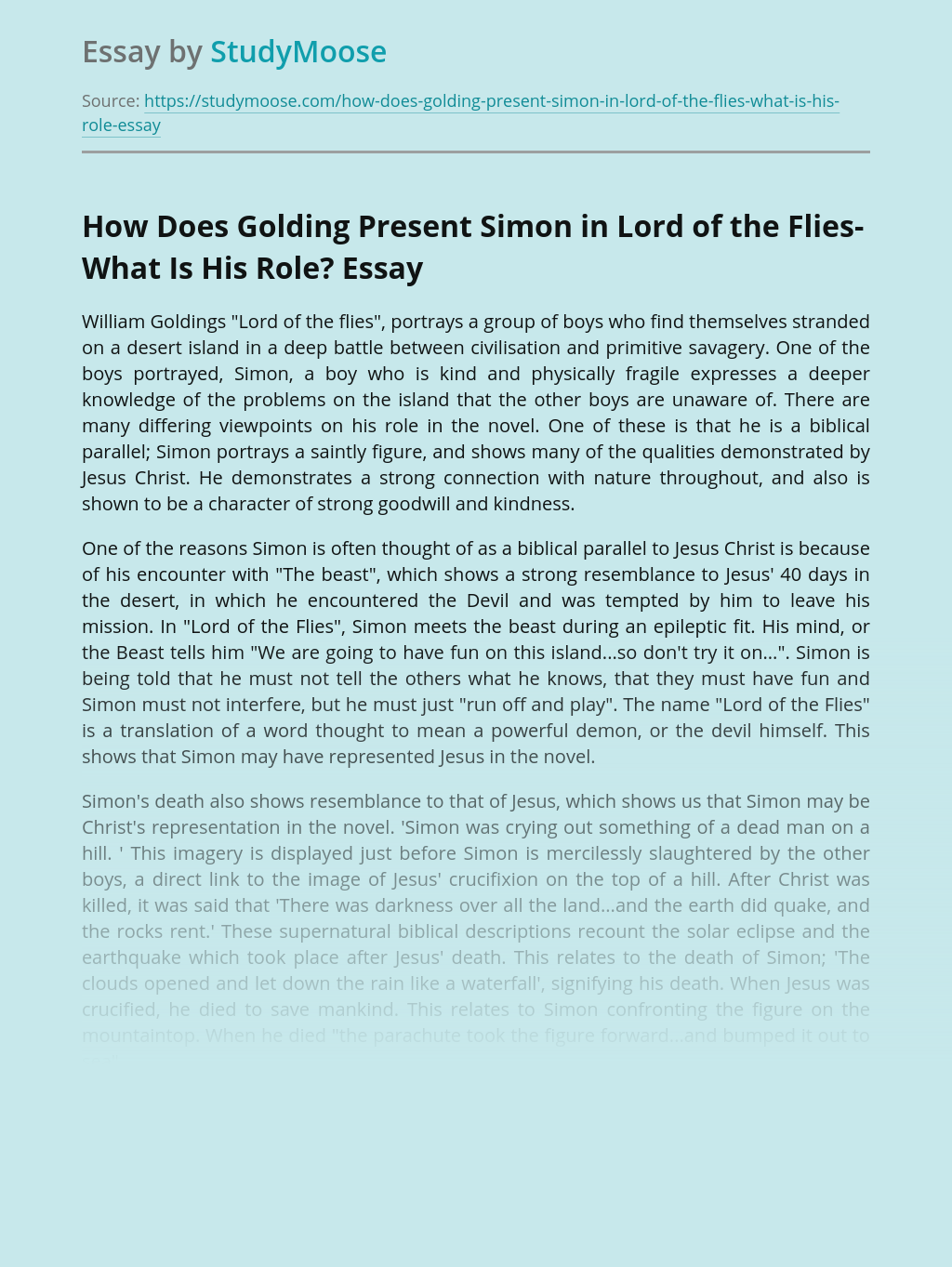 Every literature tries to make a specific point. A good writer always associates her opinion, ideas and thoughts in her or his masterpiece. Some produce literature are purely for entertainment stressing that life is funny and humorous, some include many ironies highlighting that life is complicated and hard to understand, some literature especially those classics... VIEW ESSAY

View sample
How far is Hamlet dominated by a Christian worldview?

England during the 17th century was a Christian society and country. All Children would most certainly have been baptised shortly after birth and once at a suitable age capable of understanding religion would be taught the essentials of Christian faith. Attendance at church was compulsory; failure to do so without a good medical reason or... VIEW ESSAY

View sample
Get Essay
How are women portrayed in Arthur Miller's "The Crucible"?

In Arthur Miller’s “The Crucible”, we are faced with an interesting psychological question: What would happen if the lowest social rank attained power? After all, in the time of the Salem witch trials, women suffered because of their low rank and were expected to submit themselves to men. However, instead of portraying strong female figures,... VIEW ESSAY

Alfred Lord Tennyson’s Poem Ulysses is written as a first person narrative from the perspective of a dissatisfied aged man, Ulysses, King of Ithaca. This essay will outline how Alfred Tennyson’s portrays Ulysses as an old man pondering about the life he lived as a younger man and longing for adventures similar to those he... VIEW ESSAY

View sample
Of mice and men - dreams and hope

Hopes and dreams help people survive even if they never become real. How true is this for the characters in ‘Of Mice and Men’? The novel ‘Of mice and Men’ was written by John Steinbeck and is set in Salinas and Soledad California in the 1930s when life was hard for so many people because... VIEW ESSAY