Symbolism of Simon in Lord of the Flies

Do you know someone who naturally brings out the good in people, or who always does the right thing no matter what? Simon is a shy, kind, hardworking boy who always puts others first. He tries to warn everyone on the island that there is not a beast but because he tries to do what he knows is right he gets killed by the other boys. Simon is one of the important characters in Lord of the Flies. He is one of the important characters in the novel because he represented the struggle between good and evil inside of people, nature, and Jesus or religion.

Don't use plagiarized sources. Get your custom essay on
“ Symbolism of Simon in Lord of the Flies ”
Get custom paper
NEW! smart matching with writer

Symbolism in the Image of Simon

Simon appears only in very few occasions, when compared with other main characters such as Ralph, Piggy and Jack. All those incidents are very significant to the plot. In the first chapter, Simon is introduced as a boy who is weak and “is always throwing a faint.” As the chapter progresses Golding moves on to describe Simon by his physical appearance – “a skinny, vivid boy, with a glance coming up from under a hut of straight hair that hung down, black and coarse”

The first thing that Simon represents is the struggle of good vs.

vil in people because he is always putting others first and doing what is right but, at the same time, he is the only one that interacts with the Lord of the Flies, who could represent evil. Simon was the only one that helped Ralph build the shelters while everyone else was goofing off.

He also helped the littluns get fresh fruit from the trees instead of letting them eat the fruit on the ground that could make them sick. Those are both things that show the good people can do. His interaction with the Lord of the Flies was more than likely a hallucination of some sort because a pig’s head on a stick cannot talk.

The Lord of the Flies is evil and wants the boys to hurt or kill each other and, since he is a hallucination, it shows that there is an evil part of Simon that he tries to suppress or he may not even know is there. The second thing that Simon represents is nature because he goes into the forest on his own to surround himself with nature and appreciate its beauty and does not harm the plants or animals around him. Once Simon is done working and helping the littluns he goes into a clearing in the jungle and hides in a tangle of vines.

He sits there and just listens to the sounds of the jungle and ocean and watches the animals. As he listens and watches he seems completely absorbed and at peace with nature. He is also the one who pointed out the “candle buds” which shows he was being more observant of the plants and things around them. He also knows where the freshest fruit is while most of the other boys don’t seem to know or even seem to care about the freshness of the fruit. He does not disturb the animals around him unlike the other boys. Simon is the only boy that never participates in hunting or the hunters’ dance.

The third and final thing that Simon could symbolize is Jesus or religion because he is prophetic, gathers all his information from faith alone, and is the only inherently good boy on the island. Simon tells Ralph that he (Ralph) will get off the island okay but does not say that everyone will. This is prophetic and foreshadowing of Simon and Piggy’s deaths as well as the rescue of the boys that saves Ralph from the same fate. He also has no logical explanation or evidence of his claim; it is base solely on faith. Simon also realizes that there is no beast but rather it is the boys themselves. He is the only naturally good boy on the island.

Simon’s clearing in the jungle could be compared to the Garden of Eden, which is pure and perfect until evil invades it, this evil being the other boys and the Lord of the Flies. Simon is an important character in Lord of the Flies because he represented the battle between good and evil inside of people, nature, and Jesus or religion. Simon symbolizes good vs. evil because he puts others first and does what is right but, at the same time, he is the only one that ever speaks with the Lord of the Flies, who could represent Satan.

Simon is a symbol of nature because he goes into the forest on to envelop himself in nature and value its beauty and does not harm the plants or animals on the island. The final thing that Simon could represent is Jesus or religion because he is prophetic, all his information is based on belief, and he is the only naturally good boy on the island. Simon is a timid, thoughtful, reliable boy who always does the right thing. He tries to tell everyone that there is not a beast but because he tries to do what he knows is right he gets killed by the other boys. The book would not have been the same without Simon.

Simon Represents the Truth of the Real World

I think the island was a mini-version of the real world outside (The dead parachutist drifted down from the sky on to the island as result of the military airplanes battle). People have conflicts, they bully, attack or even go to the extent of killing. For civilisation to disappear there shouldn’t be any need to become savages physically. People could still wear posh clothes, talk in the same way and be savages mentally and behave like them.

Evil is within every human (well illustrated in the conversation that Simon has with the Lord of the Flies “You’re not wanted… We are going to have fun on this island! So don’t try it on, my poor misguided boy, or else…or else we shall do you. See? Jack and Roger and Maurice and Robert and Bill and Piggy and Ralph. Do you. See? “) And also people do have good qualities in them. The level of controlling one’s evil side depends on each and every individual. This is the fundamental truth of this novel and it’s revealed to the readers through Simon.

Golding uses Simon in so many ways to convey his message as previously described. His thoughts, words and actions all are used by Golding intentionally to convey his message to the readers. Very significantly Simon faints after he has some spiritual experience, for example, after the conversation with the Lord of the Flies “he fell down and lost his consciousness.” This illustrates that even Simon comes to a point where he can’t handle the stress any longer where he faints despite his deep understanding of the real world. The truth is bitter and it’s hard to accept- the very reason why others call Simon “batty.”

Symbolism of Simon in Lord of the Flies. (2017, Jan 22). Retrieved from https://studymoose.com/symbolism-of-simon-in-lord-of-the-flies-essay 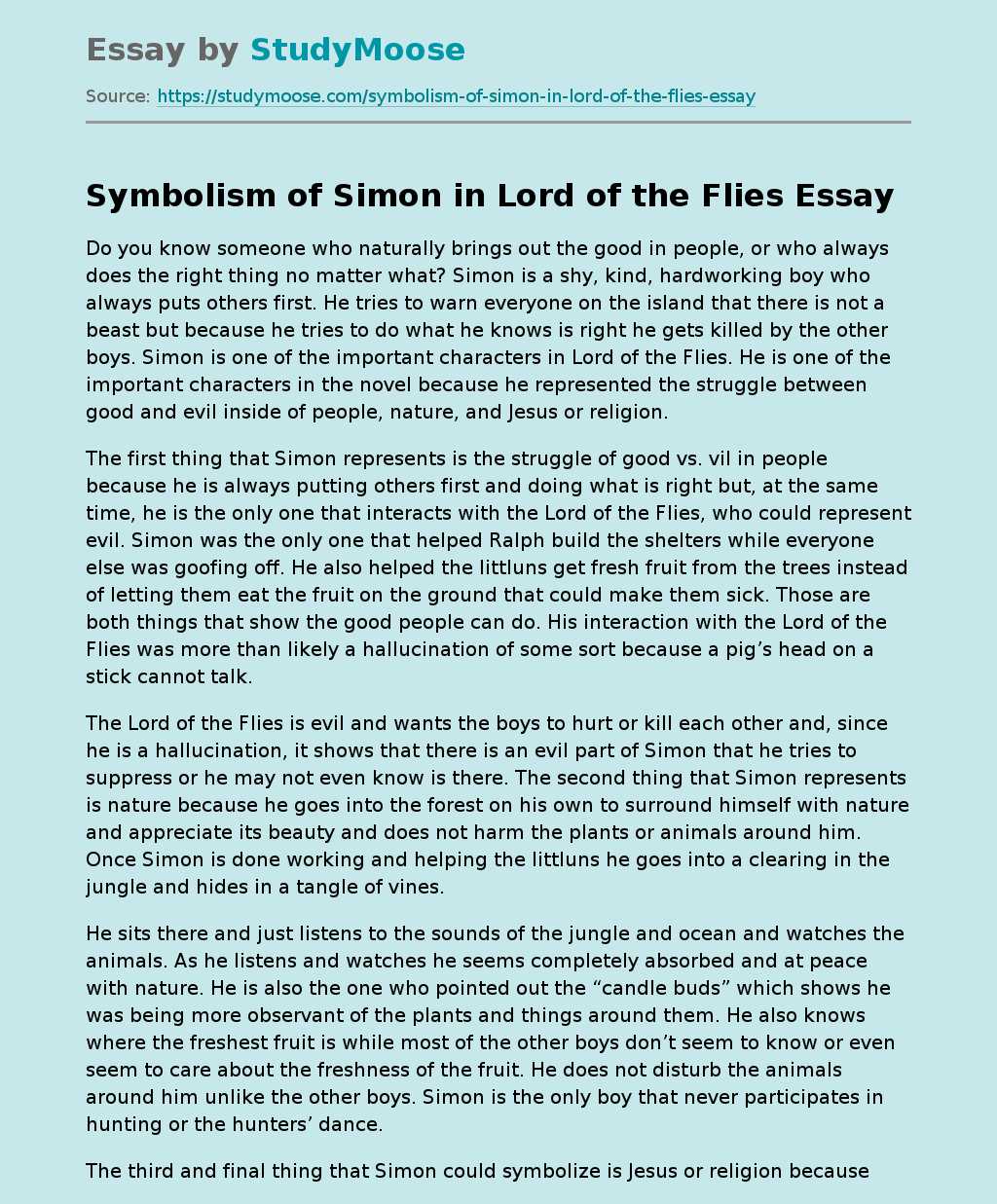