Lord of the Flies Ralph and Piggy's Glasses Symbolism

Categories Lord Of The Flies, Symbolism

The novel, “Lord of the Flies”, deals immensely with characterization and symbolism. William Golding packed his story with a great deal of literary color, making it alive and vivid to the reader. Golding’s use of symbolism is obvious throughout the entire novel.

The character that stood out the most in the novel was Ralph, who was excellently developed by Golding as a leader. Golding made Ralph in to a round character by using heavy descriptions of him that almost made the reader think as if he or she actually knew Ralph by the end of the story.

Golding’s very first introduction of Ralph into the novel the reader could already see his sense of observation even in the first sentence that he says: “This is an island; at least I think it’s an island. That’s a reef out in the sea. Perhaps there aren’t any grownups anywhere.” Although this quote may not be a direct characterization of Ralph it shows the audience how observant and wise he is.

Throughout the rest of the novel Golding characterizes Ralph in a deeper sense giving the audience a real feel of what kind of kid he is. For example later in the novel when the rules are being broken and the boys are turning into salvages Ralph tries to keep order. He says “So remember rocks for a lavatory. Keep fire going and smoke showing as a signal. Don’t take fire from the mountain. Take your food up there.

” Golding including this passage of demonstrating how Ralph is trying to enforce rules to keep an organized civilization shows Ralph as being a true leader, and keeping his morals. This truly shows Golding’s deep descriptions of Ralph in order to form Ralph into a round character.

In Golding’s description of Ralph throughout the whole book I would categorize Ralph as a dynamic character. Although Ralph’s change in the novel wasn’t as evident as the other’s, he does change. The main change I noticed in Ralph throughout the novel was the way he acts towards Piggy. In the beginning Ralph insulted him and treated him awfully. In Piggy and Ralph’s first conversation Piggy requested him to not tell anyone his name was Piggy. In the first meeting Jack calls him “Fatty” but Ralph interrupts with a shout: “His real name’s Piggy!” All the boys unite in laughter while Piggy cleans his glasses in embarrassment and shame.

Ralph disobeys Piggy’s first request in a happy manner embarrassing him in front of everyone. This is one example of Ralph not treating Piggy in a positive way and being mean to him. Not until Piggy dies Ralph realizes how much he needed Piggy not only because he was smart and had morals but because he was the only one Ralph could trust. The purpose of Golding including Ralph in the novel is to symbolize order and democracy against evil and dictatorship, which was Jack.

The whole story Ralph and Jack were butting heads. Jack envied Ralph because he was democratically elected as the leader. Many decisions about the boys’ life on the island were made as a result of democratic discussions during meetings, in which every boy had a right to speak. When Ralph told the boys off about not sticking to the rules he reminded them “you elected me chief!” William Golding does an amazing job characterizes Ralph and giving the readers an image of how Ralph is not only a character, but a real boy.

A big part of the book “Lord of the Flies” is symbolism. Golding uses Piggy’s glasses as a symbol of intelligence, rationality and common sense, all qualities possessed by a civilized human being who functions in a society bound by rules and laws. The glasses are one of two man-made objects on the island, which demonstrates a symbol of intelligence through the technology needed to create such an object. Golding shows the symbol of new technology when the boys say “His specs use them as burning glasses!”

This shows the glasses are symbolic of the technological advances that can be made by man. Piggy’s glasses started the fire which is first used to make a signal fire, and later to catch the attention of the ships that could be passing by the island.

Throughout the novel, the specs become soiled with dirt, or the sins of the boys. When he speaks in front of the assembly, Piggy often finds himself “taking off his glasses and wiping.” them in attempt to remove the blur of sins from the falling society. Also Jack slaps Piggy, the glasses “fly off and tinkle on the rocks one sides broken” the lens is demolished. As Piggy`s vision begins to diminish and he becomes literally blind, the boys are metaphorically blinded to reason, common sense, and rationality.

Therefore, the specs are used throughout the novel to foreshadow events and as a symbol of intelligence, rationality and common sense. The entire purpose of the specs is destroyed by savages, proving Golding`s belief that “savagery is more powerful then evil.” Throughout Lord of the Flies, William Golding exhibits his belief that “human nature corrupts all society.” The glasses are used as a symbol of intelligence. However, as they slowly deteriorate, so does the social structure of a civilized society with a movement from structure to savagery.

In the novel “Lord of the Flies” William Golding’s way of writing brings the characters and the symbols alive.

Lord of the Flies Ralph and Piggy’s Glasses Symbolism. (2017, Mar 30). Retrieved from https://studymoose.com/lord-of-the-flies-ralph-and-piggys-glasses-symbolism-essay 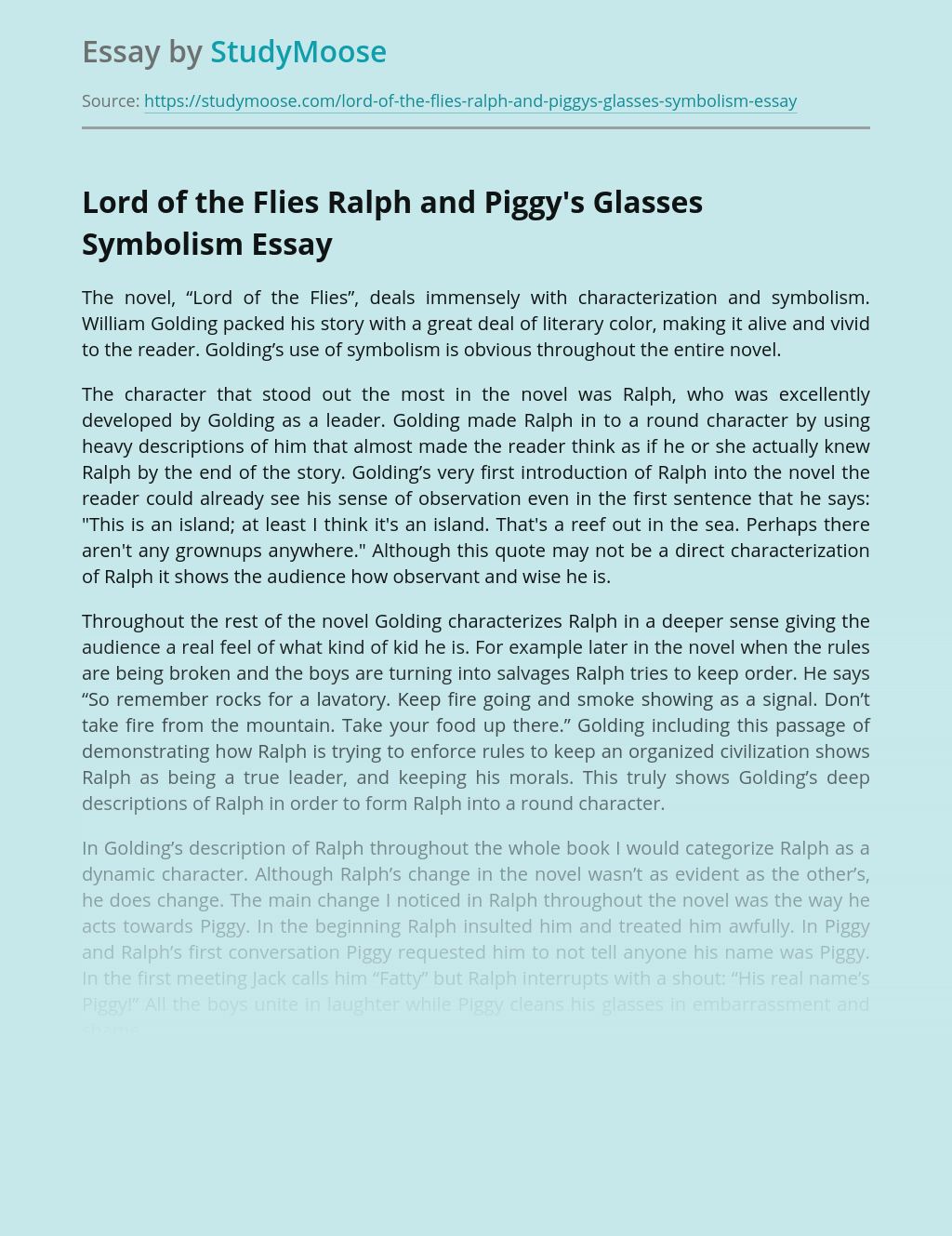 Examine the significance of the character Piggy in the novel “Lord of The Flies” consider his purpose, key role and relationship with the other boys at important points in the novel. To mimic men’s actions and lost of civility in times of war and need, William Golding, narrates a story in which all characters are...

Lord of the Flies: Savagery vs Civilization

An innocent pig in a jungle nibbles on grass in the early morning. The pig squeals whilst his head snapped off with a boy as its last image it would ever witness. “He who makes a beast of himself gets rid of the pain of being a man” is a quote which widely relates to...

Get Essay
Symbolism in the Crucible

The Doll – What original started of as an innocent gift from a scared little girl turned into tangible evidence to put poor Mrs. Goody Proctor away for good. Mary Warren, a feeble minded follower who almost has a heart, manages to do something admirable by making Goody Proctor a nice doll. Later in the...

The Allegorical Character of the Novel Animal Farm

An Examination of J.K. Rowling’s Utilization of Animal and Color Importance in Her Harry Potter Series Numerous think about importance the most important factor in comprehending the well-informed realm. “Signs and metaphors extend into the world of everyday language and figures of speech” (Biedermann VII). In turn, the Harry Potter novels of J.K. Rowling are...

Medea's murder of her children

The image of Medea presented by Euripides in the exodos is undoubtedly largely horrifying and appalling to the audience. Medea manifestly presents her desire for revenge and it is difficult to sympathise with her character. However, in many respects her character fits the image of a tragic hero. Although, it is widely controversial to associate...

Being hung because of someone else’s lies, selfishness, and lustful temptations, seems fair right? This is exactly what happened because of Abigail Williams. 19 people were hanged during the Salem Witch Trials, which was consequent of Abigail Williams lies, and selfishness. Abigail was the young women that John Proctor had an affair on his wife...