The play the "Odd Couple" by Neil Simon

There were two intermissions where the audience was able to stretch their legs and get something to eat or drink. Most of the audience stood up during these times and went out into the hallway to mingle with friends and talk about the play.

Don't use plagiarized sources. Get your custom essay on
“ The play the “Odd Couple” by Neil Simon ”
Get custom paper
NEW! smart matching with writer

The play starts with a group of men playing poker. They are a little worried because their friend Felix is not present.

After a little arguing between them they decide to call their friend’s wife and see if she knows where he could be. She tells them that they have just broken up after being married for twelve years.

To startle the men even more, she tells them that Felix has gone out to kill himself. Almost immediately, Felix arrives at Oscar’s house, where the men are playing poker. They all try to keep him calm but nothing seems to work. Finally, they decide that Felix will stay at Oscar’s until he gets back onto his feet.

After a short period of time Oscar can not stand to live with Felix. He is a compulsive cleaner and everything must be in order at all times.

One day, Oscar decides that he needs to touch something soft. By this he means he needs to touch a woman. So Oscar invites the Pigeon sisters, who live in the same apartment building to dinner. Felix slaves over dinner all day and becomes mad when Oscar arrives home late. Oscar tries to calm Felix once again but nothing seems to work. Then the doorbell rings and the sisters are welcomed into their home. Felix, who can not talk to girls very well, is forced to talk to them while Oscar goes into the kitchen to make the ladies some drinks. Felix makes the ladies cry when they see how upset he is without his wife. All this time Felix has left his London broil in the oven.

The dinner is ruined, so the sisters invite the two men up to their place. Oscar is very happy at the thought of this, but Felix says that he will not go to the women’s apartment. He says he is too embarrassed and would rather stay home. This disgusts Oscar and the next day the two get in an enormous fight. Oscar kicks Felix out of his apartment and tells him to find another place to stay because he cannot stand him. When Felix is leaving he tells Oscar that this will be “on his head” and that he will be okay without him. This statement confuses Oscar and he feels that a curse has been placed on him. After that, Oscar tries to get Felix to come back, but he is gone.

Later that night when the men are playing poker they hear the doorbell. At the door are the Pigeon sisters and Felix. They came down to pick up his belongings and to tell Oscar that Felix will now be staying with them. Oscar is astounded by this, but there is nothing that he can do about the situation. At the end of the play, Felix removes the “curse” on Oscar and talks to his poker friends. They decide that nothing will get between their friendships with each other ever again. The theme of the show is that friendship is a bond between people that cannot be broken, no matter what hardships are put on it. Some of the strong points of the show were the excellent facial expressions, and the acting without words.

There were also great sound affects in this play. For example, when the men went to the bathroom a sound was made that actually sounded like a toilet. Lysol, real cigars and cigarettes were used and this made the audience seem as if they were not just the audience, but that they were actually in the play. Furthermore, there was a good set with good lighting and nice props. Finally, a cup and a plate were broken during the play and this made it seem more realistic. The performance did no have too many weaknesses but there were a few.

The actors stumbled on their lines a little, which is understandable and the intermission could have been a little longer. There was a long line to buy something to eat or drink and some people were not able to get what they wanted before it was time for the show to resume. Also, the house was a little warm and the seats were uncomfortable. I would definitely recommend the next show performed by this group because the actors were great, had nice smiles and had a good sense of humor.

The play the "Odd Couple" by Neil Simon. (2020, Jun 02). Retrieved from https://studymoose.com/the-odd-couple-new-essay 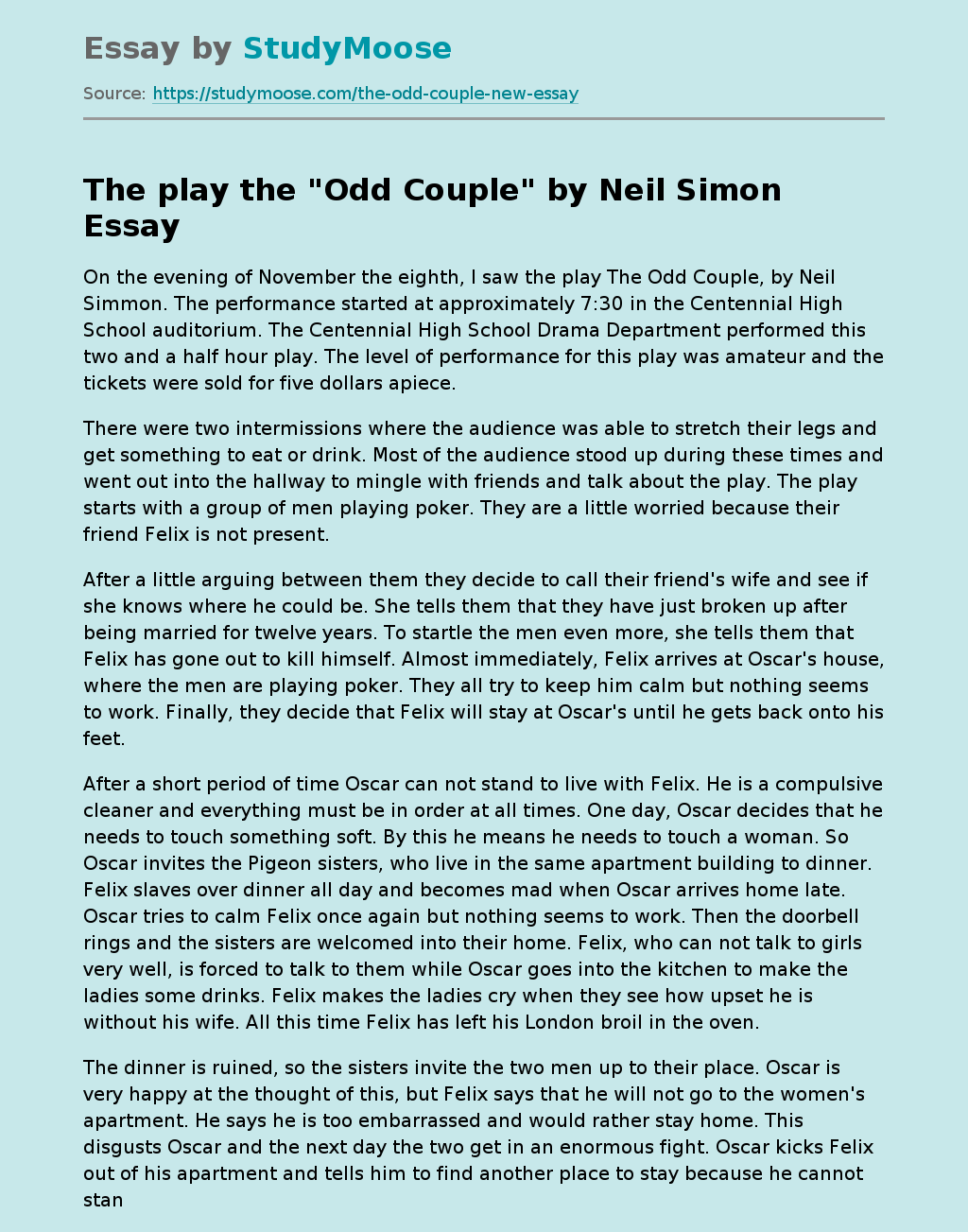