In Neil Gaiman’s short story “Chivalry”, an elderly woman finds and buys the Holy Grail in a thrift shop to use it as a decorative element in her house. At the same time, a knight from the Round Table is in the quest of finding this sacred object of God. This short story contains many elements of romance, such as the religious quest, love and adventure and courtly and chivalric life. By modernizing romance, Gaiman suggests that love and loyalty are important values even in today’s society, that courtly and chivalric life are still alive in one way and that, unfortunately, religious quest is not as much valued as it used to be.

Don't use plagiarized sources.
Get Your Custom Essay on Modernization of Romance Elements Just from $13,9/Page

Gaiman does this by using literary elements such as symbolism, allusion, characterization and irony. Love and loyalty are embraced in romance and in today most people’s lives. In “Chivalry”, Mrs. Whitaker lives by them because she’s very devoted to her late husband, Henry.

When Galaad offers to Mrs. Whitaker the Apple of Life which can restore beauty and even grant eternal life, she pictures herself young, beautiful and very attractive to man. Right after this she goes to her parlor and looks at a “photograph of her late husband Henry, smiling and eating ice cream” (Gaiman, 44) and when she comes back she refuses Galaad gift because Mrs. Whitaker realizes that she had already lived her life and that she had a man who loved her to which she decides to remain loyal. Mrs. Whitaker is also a fan of Mills and Boon romance books which she buys at the thrift store and although she never manages to read them all, Mrs.

Whitaker grants special importance to those books. With names such as “Her Thundering Soul”, “Her Turbulent Heart”, “Her Majestic Passion” and “Her Singular Love”, those books seem to represent the way Mrs. Whitaker feels in her life and the love that she has for her husband, and the reason why they are so appealing is because they keep those feelings of love and loyalty alive. Besides Mrs. Whitaker, Marie, a volunteer salesperson at the thrift store also experiences love in a very special way. Through the book, Mrs. Whitaker notices changes in Marie’s physical look, and at the end we find out that this is due to Marie meeting Galaad.

When the woman replacing Marie at the thrift store informs Mrs. Whitaker that Marie “went of with a young man […] on a horse” (46), the allusion is made here to the popular belief that every woman will meet, at some point in life, her perfect knight to whom she will fall in love with and together they will run away on his white horse. Gaiman makes this popular belief happen to show that this hopeful ideal love is still alive today. Values such as love and loyalty are experienced by Mrs. Whitaker through her decision, her book interests and also by Marie and her happy ending.

Courtly and chivalric life represents another element of romances and they are kept alive in “Chivalry” through Galaad. The story is somehow ironic because Galaad is really a medieval knight and not a man from today’s society but his qualities are valuable qualities that even a man today would like to have. Galaad is courteous and gallant toward woman. He respects Mrs. Whitaker, calls her a “gracious lady” (37) and talks to her with good manners, he remains polite and leaves the house when asked and he comes back bringing magical impressive presents. Giving gifts, respect and politeness are also qualities of today’s gentleman around the world. In addition to this, Galaad is also honorable because he is a “Knight of the Table Round” (36) which only some of the most honorable, courageous and respected knights are part of. A part of being honorable is also being honest, which Galaad is since he clearly states his goals and intentions to Mrs.

He comes back on Tuesday he brings even more presents to Mrs. Whitaker and she finally accepts to exchange the Holy Grail for one of Galaad’s magical objects that she will use as decoration. Galaad never gave up on his quest, and instead of pushing Mrs. Whitaker, he comes back and tries new ways to convince her. All those qualities are valued by today’s man and woman, because every gallant, honorable and perseverant man is a respectful and loved man.

Even if some elements of romance as those mentioned above are still alive today, some of them like the religious quest are less valuable or even nonexistent. The Holy Grail, which is an important religious object, is treated different by the modern characters in the story, compared to how Galaad sees it. First of all the shop owner was able to put a price on it, which is “30p.”(34), not very much compared to its real value. Also, Mrs. Whitaker treats it like any other “dusty silver goblet”, “thickly coated with a brownish red dust” that she “washe[s] out with great care” and puts it “on the mantelpiece in her parlor”(34). Clearly she does not recognize the Holy Grail’s real value and importance. This scene is dramatically ironic, because we as readers know what the Holy Grail implies and we also know that it should never be threaten that way. In contract to Mrs.

Whitaker reaction there is Galaad and his perspective. First of all he qualifies his search for the Holy Grail as a “Right High and Noble Quest” (36) which make us understand how important it is to him. Then, during the short story he tries to bargain the Holy Grail for other magical objects such as the Sword Balmung, the Philosophical stone or the Apple of Life which have incredible magical powers. Knowing that he would give all this objects away only to obtain the Holy Grail demonstrates the Holy Grail’s real value. The reason why we see those opposite perspective concerning the Holy Grail is because it is a religious object and during medieval times religion was way more important and valued than it is today.

As we can see Neil Gaiman successfully modernized romance, by bringing important elements in a modern environment. Most of them, namely love and loyalty and courtly and chivalric life are parts of our literature and even our lives today, only we do not have knights and ladies, we have teens, gentlemen and elderly loyal couples. Unfortunately some elements, like the religious quest lost some of their importance during the years, due to the modernization of our society and the changing of our beliefs. Neil Gaiman demonstrates all this across a short story, “Chivalry” which does a great job into mixing medieval times with the modern society of today. 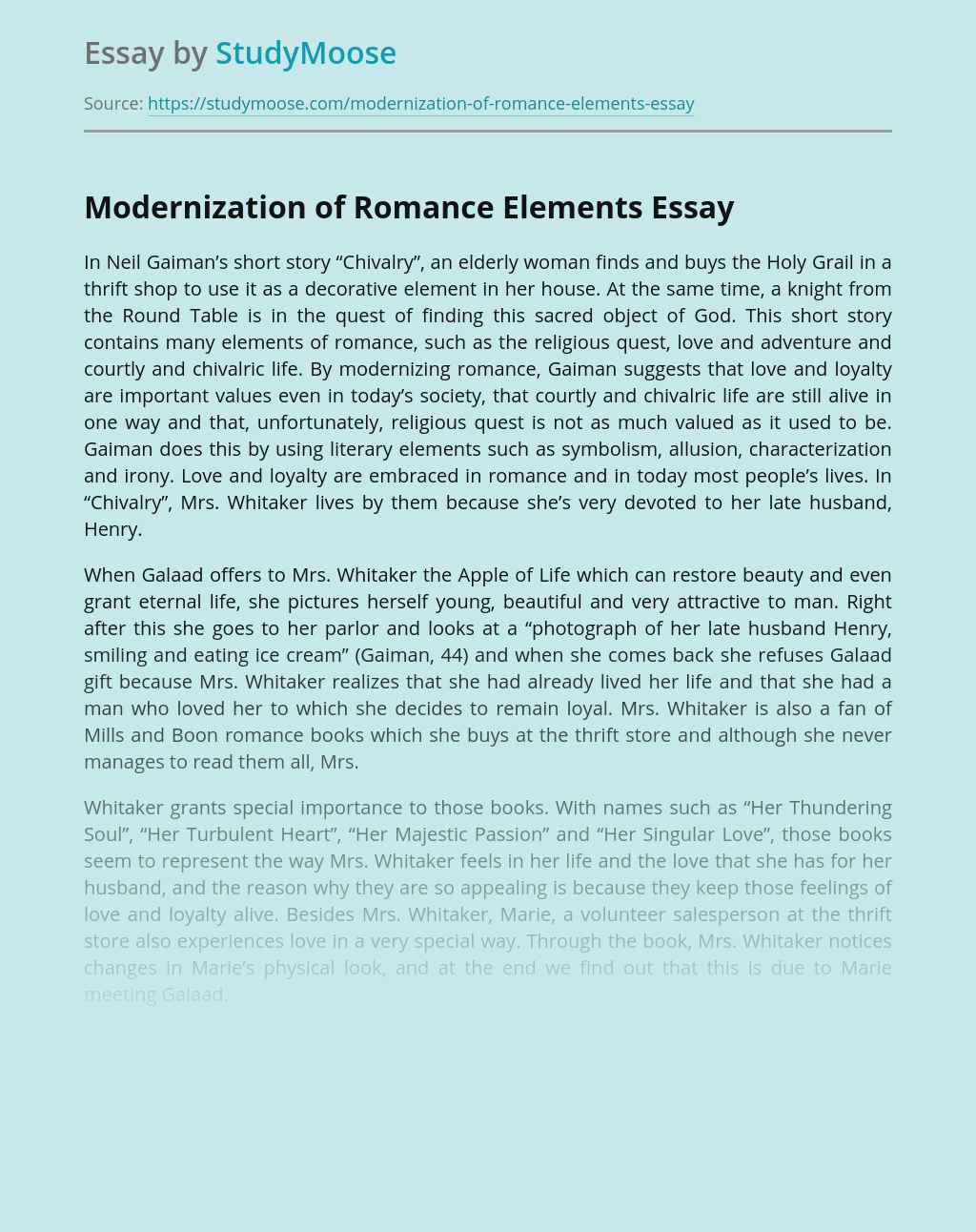 ”The Arena” is a short story

5 / 5 ( 1 vote ) ”The Arena” is a short story written in 2008 by Martin Golan. The story takes place in the suburbs of New Jersey where the protagonist lives. There is special focus on the main character, who is the father of two children, and who has experienced the worst in...

"The Open Boat" by Stephen Crane

5 / 5 ( 1 vote ) In “The Open Boat” Stephen Crane uses the sea and four men adrift in a dinghy as a framework for communicating his ideas about life. The story, in my opinion, is a metaphor for life. The four men are helpless against the indifferent, yet overwhelming forces of nature....

Get Essay
Summary of Short Story The Sculptor's Funeral

5 / 5 ( 1 vote ) A major theme in this story is the effect that close-mildness can have on an individual’s life. This story is set in the small town of Sand City, Kansas. Most of the people in the town are greedy and materialistic, but above all they are very close-minded. The...

5 / 5 ( 1 vote ) In the short story A Clean Well-Lighted Place written by Ernest Hemingway in 1933, there are three characters that are defined by light.  First there is the elderly gentleman who is a customer in the bar.  He regularly comes to the bar to get drunk while he sits...

An Analysis of "Jamacian Fragment"

Reflection on A Short Story Gimpel the Fool

5 / 5 ( 1 vote ) Sonny’s Blues by James Baldwin depicts the story of two brothers and how they come to understand each other’s feelings. Also the story deals with the African-American experience and even though the two brothers have assimilated themselves in the white society, they experience the pain of institutional racism...

My story: Love is Blind

5 / 5 ( 1 vote ) Jeremy Gold’s was no ordinary 25 year old man. Apart from being stunningly handsome with smooth flawless tanned skin, silky black hair and pumping red lips, he was also an agent working for M.I.5. One sunny afternoon after a full English lunch at the Old Inn Jeremy came...