1. For what purpose would Gawain poet place King Arthur in line with the founders of the ancient civilizations? The purpose is to show how well respected king Arthur was, how he was known as the greatest king in medieval times, to show how he was an important leader of medieval times and Britain. 3. While describing the knights and ladies of Arthur’s court, the Gawain poet alludes to some of the values of his audience? What adjectives, used to describe these scenes of “revelry”, correspond to these values? Some of the values are that a married women and married men can engaged in relationships with other people other value is that they value the life of the king and he is always to protected.

Don't use plagiarized sources. Get your custom essay on
“ Sir Gawain and the Green Night Discussion: Study Question ”
Get custom paper
NEW! smart matching with writer

The poet says in the text “And when this Britain was founded by this great hero, bold men loving strife bred therein, and may a time they wrought destruction. More strange things have happened in this land since these days than in any other that I know, but of all the British kings that built here, Arthur was ever the most courteous , as I have heard tell.

“The poet is describing what an incredible king, Arthur is and what a remarkable leader is.

King Arthur actually reminds me of Theseus from our last story “The Knights Tale “because they both are kind of similar. They are similar in the way that King Arthur is a legendary British Leader and Theseus was an iconic hero they both are highly powerful and everybody thinks of them as a great leader and both of them are Kings, Arthur of Britain and Theseus of Thebes. 5. What does Arthur challenge the Green Knight to? Why, do you think? Arthur first asked the Green Knight to sit down and join them to tell the story. That shows his politeness and chivalry. He later challenges him to a dual with his men, this shows how faithful and honorable he has in his court.

6. What is the Knights reaction to this challenge? He first refuses the offer to sit down then he refuses to fight Arthur’s men and instead play a game. 7. How does Sir Gawain rationalize his request of Arthur that be one to accept the Knight’s challenge? What qualities does he thus show? Gawain rationalizes his request to complete the Green Knight’s challenge by reciting, the rules of the game to show he actually wants to do it and isn’t being rational. This shows the qualities of courage and strength, and also thinking things through. 8. What bargain does the Green Knight strike with Gawain? That Gawain will have to report to him in a years’ time to be murdered. 9. Describe the reaction of the gathered crowd to the spectacle that enfolds before Arthur.

The crowd is shocked into silence most of the time, during the feast but at other times are most likely scared or gasping. Discussion Question On Part 2 of Sir Gawain And The Green Knight 1. Why did the lords and ladies have “sorrow” for Gawain? Why did they “make mirth” for his sake? They felt bad for Gawain because they knew he would soon be riding off to his death, they felt they had to “make mirth become happy, to cheer him up. 2. Why do you think the Gawain poet aggrandizes Gawain by describing his equipment and clothing in such extravagant and hyperbolic detail? The poet did this to emphasize on the strength and courage of Gawain who was sacrificing his life, and making seem almost “superhuman” to be more of a hero.

3. What might the significance of birds that are embroidered on Gawain’s suit be? The significance of these birds are most likely to go with the symbolism of the color green, and nature; peace, fertility, rebirth, and how Gawain is bringing peace to his kingdom. 4. What are Gawain’s Five Virtues”?1.To be fault in his five senses.2.never to fail in his five fingers3.to be faithful to the five wounds that Christ received on the cross.4.to be strengthened by the five joys that the virgin Mary had in Jesus the Annunciation Nativity ,Resurrection , Ascension, and Assumption.5.To , possess brotherly love, courtesy, piety, and chastity.

5. Summarize the attitude of Gawain’s kinsmen to the king who allowed his knight to dual with a Green Knight for empty pride”, caught in a cavil [conspiracy] in a Christmas games? The people treated Sir Gawain like he was a Celebrity because he was King Arthur’s cousin and because he was on his court. 6. What do you think is the dramatic significance of the fact that the town’s people are unable to give Gawain direction to the Green Chapel of the Green Knight? This shows how many people actually go to the Green Chapel, and how distant, remote mysterious and “unreal “it actually is. 7. Who is the “Sire” to which the poet refers
in 1.751?

The “Sire” in which the poet is referring to could be King Arthur because “Sire” means to address someone respectfully who is in a high social status. The poet could refer to Arthur as “Sire” because he the king of of Britain. 8. Gawain is praised more extravagantly by those whose await his appearance for dinner than by any whose knew him at the Round, earlier in the epic. Why do you, the he seems to have grown in the poets and readers eyes? After taking on such a brave and courageous challenge, Gawain and the Green Knight and the reader’s and writer treats him with more respect.

9. For what reason do Gawain and his host sit together “soberly”? They sit together “soberly” as they both know it is the last time they will be together before Gawain goes off to the Green Knight. 10. Speculate on the symbolic significance of the two ladies one old and weathered, other “fresh as the first snow”? They could represent two halves of Gawain’s life, How once so recently he was young, and new and had a whole life ahead of him, and the old one represents how he knows his life is coming to an end and how the burden is taking its toll on him. 11. The final passage of Part 2 is reminiscent of what earlier passage in the epic? The final passage is reminiscent to King Arthur’s court when they engaged the festivities of the new year.

Sir Gawain and the Green Night Discussion: Study Question. (2016, May 18). Retrieved from http://studymoose.com/sir-gawain-and-the-green-night-discussion-study-question-essay 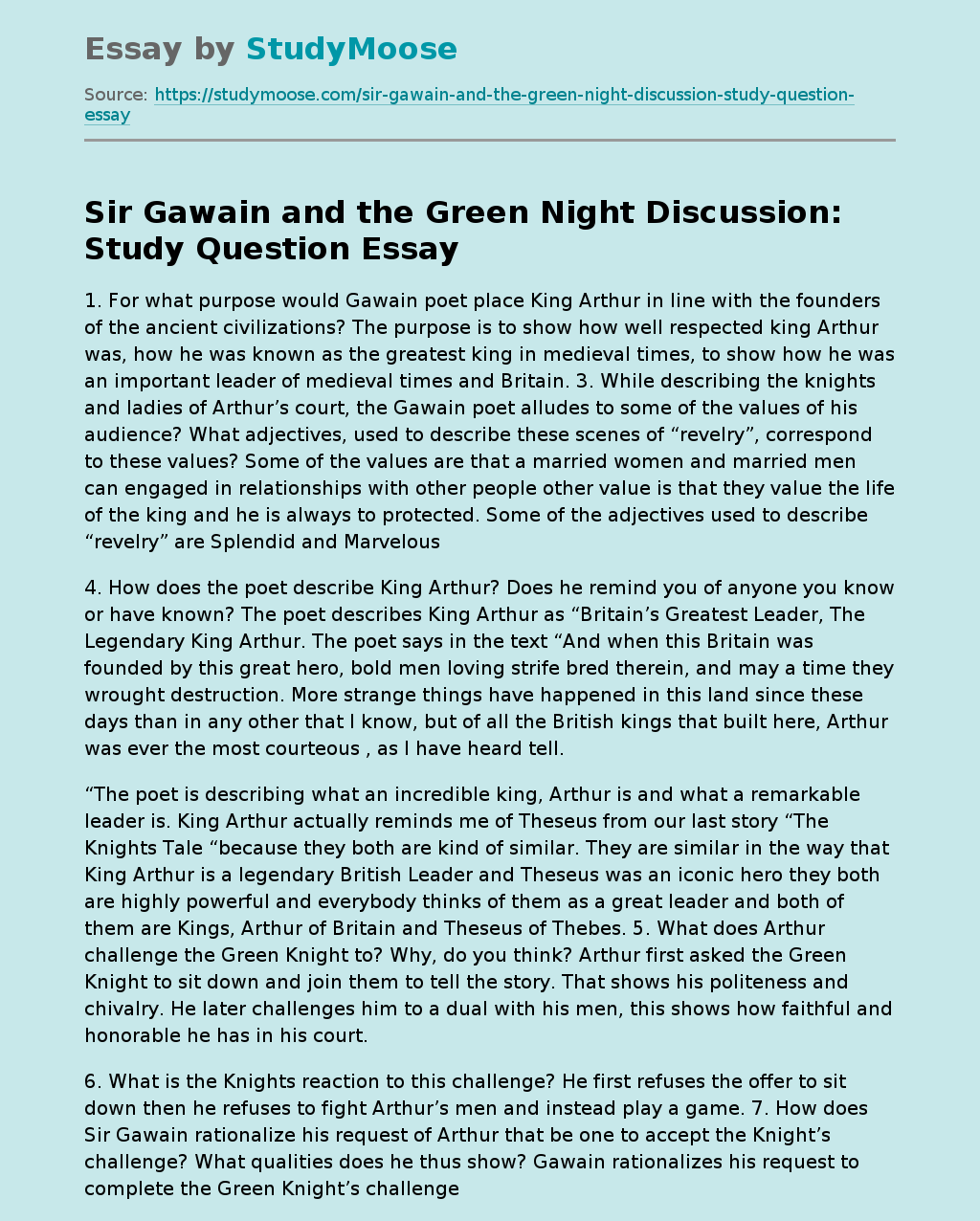