Literary Analysis of Robin Goodfellow in A Midsummer Night's Dream

Numerous scholars who examine and analyze the comedy of A Midsummer Night’s Dream by William Shakespeare point to Puck as the most significant character in the play. Although Shakespeare masks Puck’s important role in the comedy by hiding him amongst the more powerful characters, it becomes apparent that Puck’s mischievous attitude and knack for creating chaos are what moves the play along without a designated climax (“The Comedies: ‘A Midsummer Night’s Dream”).

Puck is first introduced in “Act II Scene I” when a fairy notions Puck’s infamy by inquiring to him, “Either I mistake your shape and making quite, Or else you are that shrewd and knavish sprite called Robin Goodfellow” (II.

Don't use plagiarized sources. Get your custom essay on
“ Literary Analysis of Robin Goodfellow in A Midsummer Night’s Dream ”
Get custom paper
NEW! smart matching with writer

i. 33-35). The fact that Puck is especially known for his ability to morph order to disorder, and likewise, foreshadows the idea of Puck playing an important role in the inevitable chaos and subsequent order between both the mortals and the fairies.

Puck, the “shrewd and knavish” fairy assistant to Oberon, plays and undeniably important part in the constant battle between order and disorder in A Midsummer Night’s Dream through his intentional antics, comedic mistakes, and convoluted relationship with both fairies and mortals.

The names “Robin Goodfellow” and “Puck” were used in traditional fairy lore me as a sobriquet for the devil. The troublesome persona of Puck reflects his name indubitably.

One of the predominant characteristics of Puck is his ability to create disorder, where he first displays this nature in “Act II Scene II” when he mistakes Lysander for Demetrius and anoints his eyes with a love potion.

When Lysander wakes up, he immediately falls in love with Helena, discarding his true love, Hermia, by saying, “Hang off, thou cat, thou burr! Vile thing, let loose” (III. ii. 270). Puck’s next act of mischief in the play is directed towards Nick Bottom and Titania, when he transforms Bottom’s head into that of a burro in order to cause Titania, who was under a love potion, to fall madly in love with him upon her awakening.

He expresses his gleeful attitude towards the situating by declaring, “My mistress with a monster is in love” (III. ii. 6). When listening to Puck’s dialogue between other characters in the play, one can observe that Puck enjoys bringing about chaos to mortals in order to entertain himself and his master, Oberon, just as Philostrate organizes entertainment for his master, Theseus (“Puck Through the Ages”). That being said, Robin also plays a major part in returning order to the turmoil he formerly caused.

In “Act III Scene II,” at the height of the confusion in which all four Athenian lovers along with Titania and Bottom were affected by magic, Puck begins his campaign to mend the discord. First, he squeezes the love potion into Demetrius’ eyes in order to get him to fall in love with Helena. Then, Puck casts a thick fog on the forest and imitates both Lysander and Demetrius’ voices to get all four lovers to wander near each other without noticing and sleep.

Once asleep, Robin squeezes the love potion once more on Lysander’s eyes and declares a return to order by saying, “Jack shall have Jill, Nought shall go ill; The man shall have his mare again, and all shall be well” (III. ii. 461-63). By using the same kind of mischief that caused the disorder in the first place, Puck was able to harness its power and fix the conflict to restore peace again. Through his manipulation and mischief, Robin Goodfellow was able to conjure up both order and disorder in order to entertain himself, his master, and everyone who hears the play.

Furthermore, he moved the play along without a climax by altering the “reality” that the play contained. Puck even left the audience in confusion when he gave the last word, saying that us the readers could decide for ourselves if the play was real or not. These contributions alone are why Puck is considered the most important character and why the play itself makes sense, is a comedy, and is still a classic example of literature today. 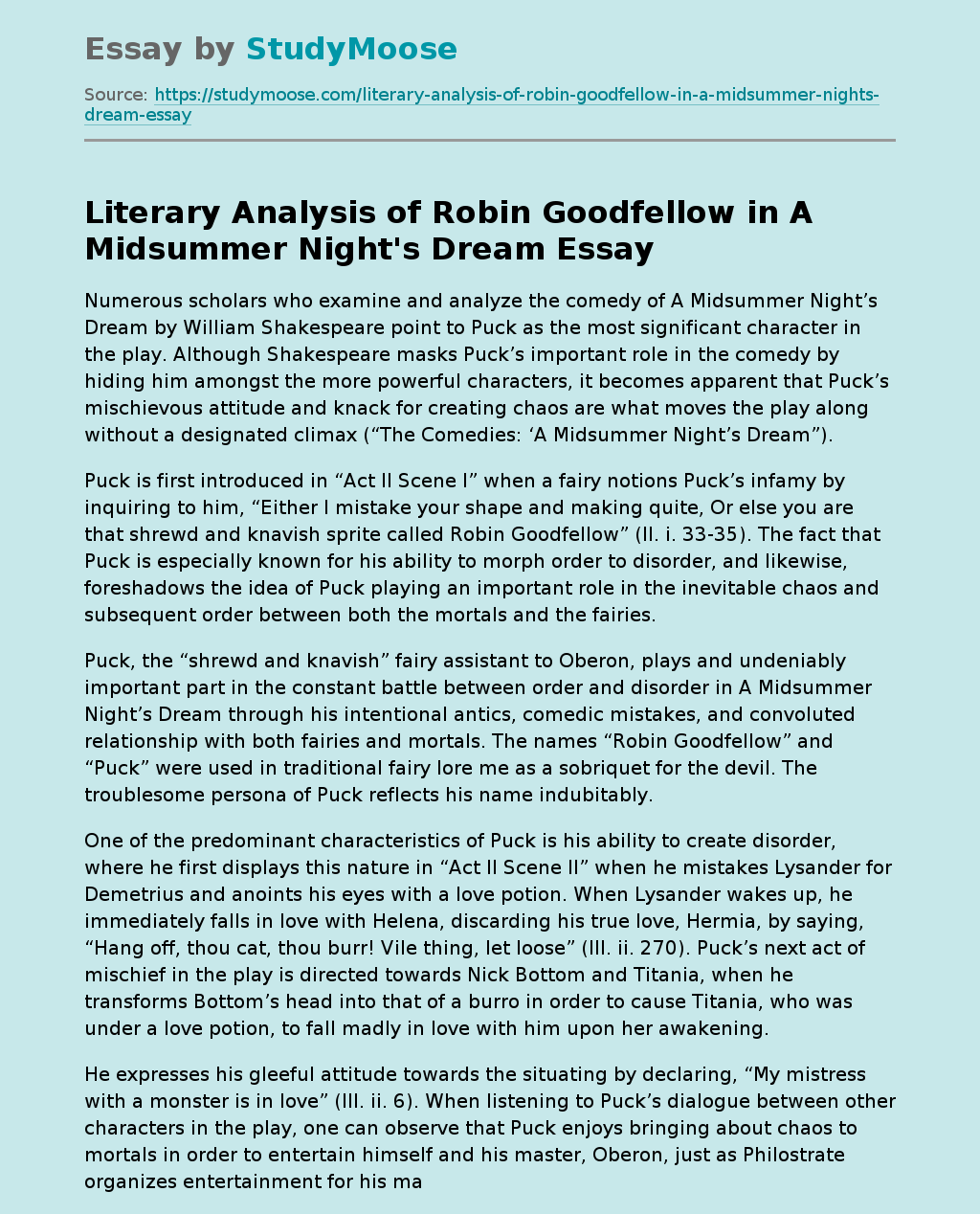