Theme of Boundaries in A Midsummer Night's Dream

Within A Midsummer Night’s Dream, Shakespeare uses the theme of boundaries to demonstrate the fixed nature of moral boundaries, the separation of dreams and reality, as well as the physical boundaries dividing the forest and Athenian court. Despite this, Shakespeare also uses this pre-conceived idea of the fixed boundaries within Elizabethan society in order to experiment with the dissolving of boundaries, and the impact that this has on society.

Shakespeare uses the spatial boundaries of the settings of the forest and the Athenian court in juxtaposition.

Don't use plagiarized sources. Get your custom essay on
“ Theme of Boundaries in A Midsummer Night’s Dream ”
Get custom paper
NEW! smart matching with writer

Shakespeare opens the play within the setting of the Athenian court, with Egeus bringing a legal dispute before Theseus, the city’s chief legal authority, as Theseus demands that Hermia must marry Demetrius instead of Lysander. Shakespeare uses imagery throughout this scene to demonstrate the rigidity of the law which permeates the setting, with “cloister” highlighting the potentially suffocating nature of these laws on society’s desires. Similarly, the use of the words “barren” and “cold fruitless moon” suggest that the setting of the court is void of life and warmth, demonstrating their oppressive nature on Hermia’s desire for love.

On the other hand, once Hermia, Helena, Demetrius, and Lysander leave the boundaries of the Athenian court to escape to the nearby forest, the characters are no longer within the boundary of the court, and so appear to be free from the rigid laws which restrict their desires. This sense of freedom after crossing this spatial boundary is demonstrated through Shakespeare’s use of language.

For example, the once “cold” and frozen moon is now transformed into a “governess of floods/ Pale in her anger, washes all the air”, demonstrating the now active nature of the moon, whose wild temperament has broken through the restrictive boundaries of the court. Once more Shakespeare describes the new setting as being where “wild thyme blows”, suggesting an untamed nature of the forest setting outside of the boundary of the court. This lack of order is also shown through Shakespeare’s description of “mazes in the wanton green”, which presents the chaotic nature of the forest setting, in direct contrast to the sense of order and regularity to the court setting. Shakespeare also uses the natural imagery of the “crimson rose” and “fiery glow-worm’s eyes”, which suggests an intensity of heat and bright passion within the boundary of the forest, which directly contrasts with the descriptions of the “cold fruitless moon” of the Athenian court. This juxtaposition of settings therefore highlights the harsh boundaries which separate these settings, with one being a direct contrast to the other.

Theme of Boundaries in A Midsummer Night's Dream. (2020, Oct 02). Retrieved from http://studymoose.com/theme-of-boundaries-in-a-midsummer-nights-dream-essay 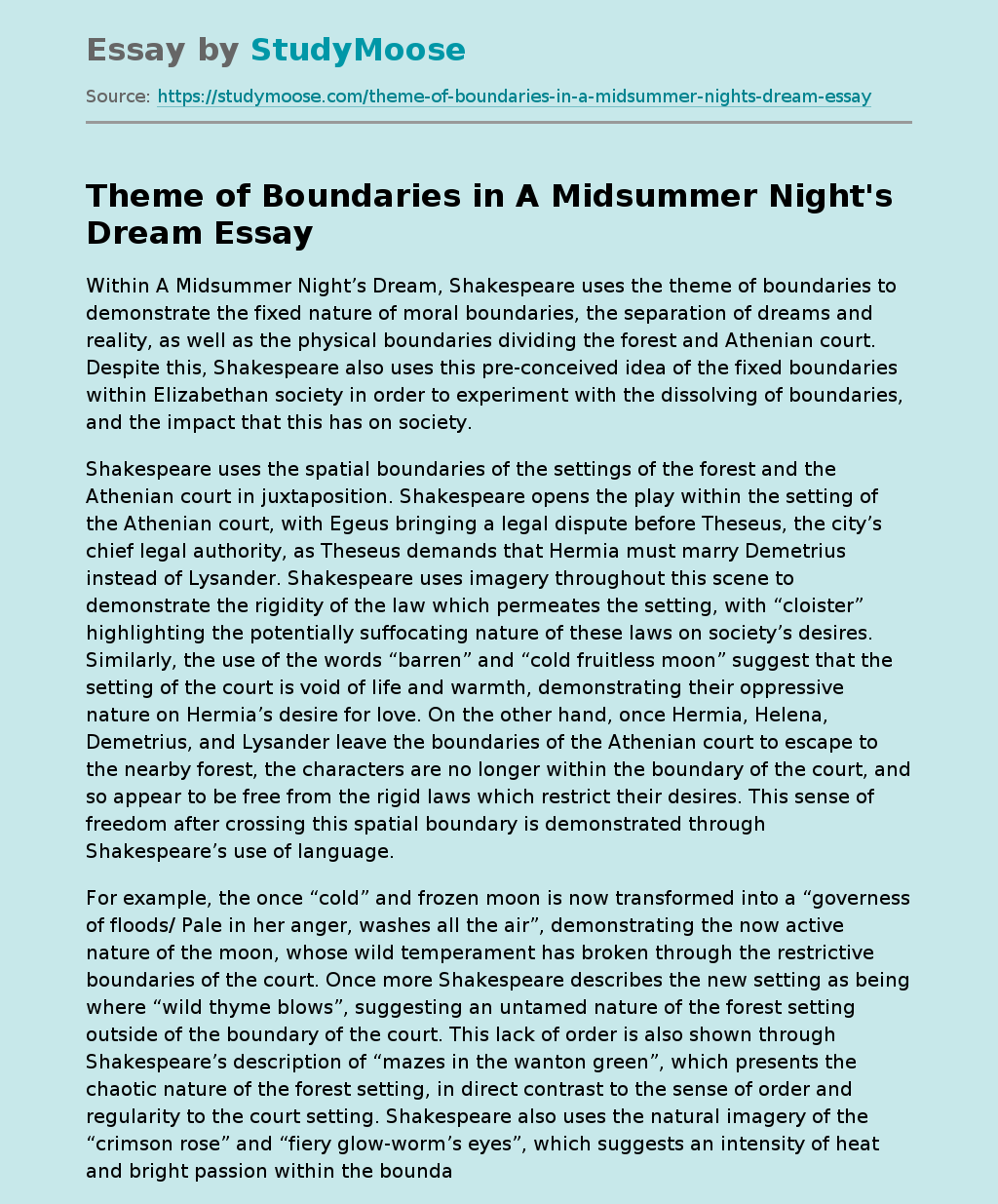