Life of a Slave Woman

Slavery for women was far more complex than slavery for men. Undoubtedly, they went through the same hardships, but the experience was very different for women. Women had to suffer daily through their hardships, but they also had to experience their children being taken or having to leave their children. Women were also used as “breeders” and were forced to have children to add more slaves for their master. Women were also denied their rights to take care of their children.

Don't use plagiarized sources. Get your custom essay on
“ Life of a Slave Woman ”
Get custom paper
NEW! smart matching with writer

In the narratives, I chose it is very clear that women were treated differently than men. For example, Mattie discussed how her father and step-fathers left the family to obtain freedom. While I understand, their thirst for freedom, this left her mother and the children alone. Her mother had to worry about obtaining freedom for herself and her kids. Also, Linda discussed how her uncle left her grandmother for freedom. The grandmother wanted to buy his freedom so he could come back, but he chose to stay.

In “Incidents in the Life of a Slave Girl”, Linda’s life had been a constant fight since she was six years old, and she never saw it change over the years (Jacobs 34). When she found out that she was pregnant, she couldn’t help but envision all the hardships and racism that the baby was going to face being a woman in slavery. All the emotional anguish and grief that she felt throughout her life as a slave was about to passed down to her daughter.

In the novel, Linda emphasizes that the life of a slave woman is incomparable to that of a slave man, in the sense that a woman’s suffering is not only physical, but also mental and emotional (Jacobs 55). Whether or not a woman is beaten or not, she still suffers from mental torments. Unlike men, women must deal with sexual harassment from white men, and the loss of their children from death or slavery. Men claim that their masculinity are stripped from them, but women deal with their loss off dignity and morality. Females deal with the emotional hardship of losing their children and being sexually assaulted. Many women feel shame from being sexually assaulted.

Family is an emotional anchor, but it is also a physical anchor. Family is a big component in Linda Jackson’s life. Linda was in a crawlspace for seven years so she could watch her children grow up. Family also helped her stay sane through her hardships. Her aunt Martha helped her stay hidden from her master and his sexual assault. Family is also an interesting dynamic for the master’s family. Slavery affects every member of every family. Linda says this because “slavery makes white fathers cruel and sensual, the sons violent and licentious, contaminates the daughters, and makes the wives wretched” (Jacobs 55). Linda believes that Mrs. Flint is mean toward the slaves because her husband has fathered mixed children.

Racism in the novel

Racism is prejudice or discrimination directed against a person or people based on their skin color or racial group. Racism is very evident in these narratives. Linda faces racism everyday through her master, master’s wife, and towns people. Linda’s grandmother faced racism when she did not receive the money that was owed to her. Her new master did not give it back because he knew that during that time period she could not say or do anything to receive the money. Mrs. Flint showed racism towards Linda a lot throughout the book. For example, Linda’s grandmother gives her boots because it is cold. Mrs. Flint cannot stand that the shoes squeaked, and she told Linda that she should throw them away. Mrs. Flint did not care that she did not have another pair, so she made Linda walk barefoot outside in the snow. Linda experiences racism when Mr. Lewis continuously beats her even though he has direct orders from the general to not beat the slaves. He beats her and sends her to the yard. Luckily, the arsenal saw her in the yard and for punishment, Mr. Lewis had to be whipped one hundred times with a cow hide and pay three thousand dollars. In “Incidents in the Life of a Slave Girl”, Linda sees two children running around. One child is black, and the other child is white. She knows that one day the white child will grow up free and protected while the slave girl will only know sadness and misery.

Religion helped dull the pain that the African American men and women slaves faced every day. Some slaves believed in God because they needed something to believe in, while others didn’t believe or hated God because they did not understand why he would let them suffer. In “Incidents in the Life of a Slave Girl”, the whites hire a preacher to teach the sermons. The preacher teaches the slaves the importance to obedient to their master. Linda was appalled at this message and could not believe what she was hearing. Elizabeth implemented her religion daily and even enjoyed preaching to others. Many communities did not accept her because she was a woman. Instead, she began to hold prayer meetings in homes and continued this practice for many years, despite strong church opposition. Another activist like this is Sojourner Truth. After gaining her freedom Sojourner became a Christian and believed that God was urging her to abolish slavery and have equal rights for all (Washington 7). Her most famous speech was “Aint I A Woman” which pointed out the discrimination that she experienced as a black woman. Also, Sojourner was the first black woman to sue a white man in court and win the case.

The jobs that these woman obtained throughout these narratives consisted of the same work life. Jacobs was a nanny, wet nurse, seamstresses, etc. The women in these narratives had easier jobs than the men, but they had two jobs in one. They had to be a mother and finish their daily tasks as a slave. For example, Jacobs grandmother could not bake her treats until she was done with all her daily duties. Also, being a mother was a scary job. Your master could sell your children at any moment and for any reason. Being a mother, you always had to put your children first. Linda could have gone up North to obtain freedom, but she decided to stay and sit in a crawl space for seven years. 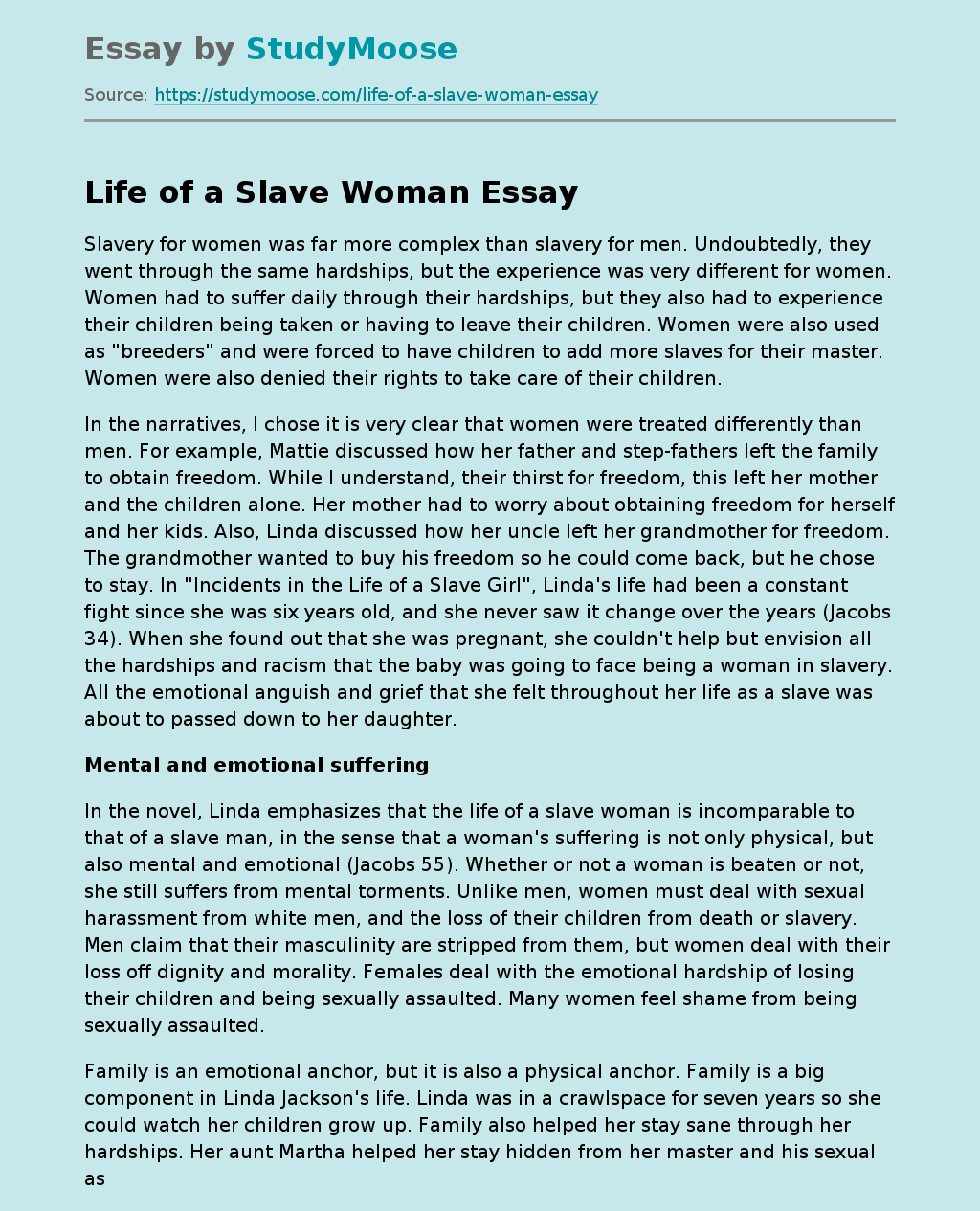