After studying this chapter, you should be able to:

9. Assess whether charismatic and transformational leadership generalize across cultures.

Private Equity’s Poster Boy
If it’s true that “Nice guys finish last,” there is no better proof than Stephen Schwarzman, chief executive of the Blackstone Group, who says his mission in life is to “inflict pain” and “kill off” his rivals. “I want war,” he told the Wall Street Journal, “not a series of skirmishes.

” And win in business he has. In 20 years, he has made Blackstone one of the most profitable—and most feared—investment groups on Wall Street, with assets approaching $200 billion.

Though these are not easy times for any investment bank, Blackstone has largely avoided the pitfalls of subprime mortgages and mortgage-backed securities. Some of this strategy might be considered good fortune—Blackstone invests much more heavily in commercial than in residential real estate. However, some credit is due to Schwarzman’s foresight. As he notes, “We were cautious in the so-called golden age.

We were the least aggressive of all the big firms in the first half of 2007. We were very concerned about the high prices of deals and the vast amount of liquidity fuelling the boom. . . .

Things always come to an end, and when they do they end badly.” Not only is Schwarzman smart and driven; he likes the attention his success has drawn. When he turned 60, his birthday party might have made Caligula blush. The affair was emceed by comedian Martin Short. Rod Stewart performed. Marvin Hamlisch put on a number from A Chorus Line. Singer Patti LaBelle led the Abyssinian Baptist Church choir in a song about Schwarzman. Who staged this event?

Schwarzman himself! When Blackstone executives prepared a video tribute to him to be played at the event, Schwarzman intervened to squelch any roasting or other jokes played at his expense. Schwarzman owns residences in Manhattan (a 35-room Park Avenue triplex, for which he paid $37 million), in the Hamptons (a Federal-style house, for which he paid $34 million), in Palm Beach (a 13,000-square-foot mansion, which, at $20.5 million, is the slum of the bunch), in Saint-Tropez, and in Jamaica.

“I love houses,” Schwarzman says. The New Yorker called him “the designated villain of an era . . . of heedless self-indulgence.” As you might imagine, Schwarzman is not the easiest guy to work for. While sunning himself at his Palm Beach estate, he complained that an employee wasn’t wearing the proper black shoes with his uniform. On another occasion, he reportedly fired a Blackstone executive for the sound his nose made when he breathed. Given his success, his lifestyle, and his combative personality, you might imagine Schwarzman is immune to the ridicule, resentment, and criticism he receives. “How does it feel?” he asked, and then answered his own question: “Unattractive.

No thinking person wants to be reduced to a caricature.”1 As Blackstone’s Stephen Schwarzman shows, leaders often are not like other people. But what makes them so? Intelligence? Drive? Luck? A certain leadership style? These are some of the questions we’ll tackle in this chapter. To assess yourself on another set of qualities that we’ll discuss shortly, take the following self-assessment. In this chapter, we look at what makes an effective leader and what differentiates leaders from nonleaders.

First, we present trait theories, which dominated the study of leadership up to the late 1940s. Then we discuss behavioral theories, popular until the late 1960s. Next, we introduce contingency and interactive theories. Finally, we discuss the most contemporary approaches: charismatic, transformational, and authentic leadership. But first, let’s clarify what we mean by leadership. Self-Assessment Library: What’s My Leadership Style?

In the Self-Assessment Library (available on CD and online) take assessment II.B.1 (What’s My Leadership Style?) and answer the following questions. 1.
How did you score on the two scales?

2.
Do you think a leader can be both task oriented and people oriented? Do you think there are situations in which a leader has to make a choice between the two styles?

Leadership, in contrast, is about coping with change. Leaders establish direction by developing a vision of the future; then they align people by communicating this vision and inspiring them to overcome hurdles. Although Kotter provides separate definitions of the two terms, both researchers and practicing managers frequently make no such distinctions. So we need to present leadership in a way that can capture how it is used in theory and practice. We define leadership as the ability to influence a group toward the achievement of a vision or set of goals.

The source of this influence may be formal, such as that provided by managerial rank in an organization. But not all leaders are managers, nor, for that matter, are all managers leaders. Just because an organization provides its managers with certain formal rights is no assurance they will lead effectively. Nonsanctioned leadership—the ability to influence that arises outside the formal structure of the organization—is often as important or more important than formal influence.

In other words, leaders can emerge from within a group as well as by formal appointment. Organizations need strong leadership and strong management for optimal effectiveness. We need leaders today to challenge the status quo, create visions of the future, and inspire organizational members to want to achieve the visions. We also need managers to formulate detailed plans, create efficient organizational structures, and oversee day-to-day operations. OB Poll: Confidence in Business Leaders Falling

The search for personality, social, physical, or intellectual attributes that differentiate leaders from nonleaders goes back to the earliest stages of leadership research. Early research efforts at isolating leadership traits resulted in a number of dead ends.

A review in the late 1960s of 20 different studies identified nearly 80 leadership traits, but only 5 were common to 4 or more of the investigations.3 By the 1990s, after numerous studies and analyses, about the best we could say was that most leaders “are not like other people,” but the particular traits that characterized them varied a great deal from review to review.4 It was a pretty confusing state of affairs.

A breakthrough, of sorts, came when researchers began organizing traits around the Big Five personality framework (see Chapter 5).5 Most of the dozens of traits in various leadership reviews fit under one of the Big Five (ambition and energy are part of extraversion, for instance), giving strong support to traits as predictors of leadership.

The personal qualities and characteristics of Richard Branson, chairman of Virgin Group, make him a great leader. Branson is described as fun-loving, sensitive to the needs of others, hard working, innovative, charismatic, enthusiastic, energetic, decisive, and risk taking. These traits helped the British entrepreneur build one of the most recognized and respected brands
in the world for products and services in the business areas of travel, entertainment, and lifestyle. Jason Kempin/FilmMagic/Getty Images, Inc.

A comprehensive review of the leadership literature, when organized around the Big Five, has found extraversion to be the most important trait of effective leaders6 but more strongly related to leader emergence than to leader effectiveness. Sociable and dominant people are more likely to assert themselves in group situations, but leaders need to make sure they’re not too assertive—one study found leaders who scored very high on assertiveness were less effective than those who were moderately high.7

Unlike agreeableness and emotional stability, conscientiousness and openness to experience also showed strong relationships to leadership, though not quite as strong as extraversion. Overall, the trait approach does have something to offer. Leaders who like being around people and are able to assert themselves (extraverted), disciplined and able to keep commitments they make (conscientious), and creative and flexible (open) do have an apparent advantage when it comes to leadership, suggesting good leaders do have key traits in common.

One reason is that conscientiousness and extraversion are positively related to leaders’ self-efficacy, which explained most of the variance in subordinates’ ratings of leader performance.8 People are more likely to follow someone who is confident she’s going in the right direction. Another trait that may indicate effective leadership is emotional intelligence (EI), discussed in Chapter 4. Advocates of EI argue that without it, a person can have outstanding training, a highly analytical mind, a compelling vision, and an endless supply of terrific ideas but still not make a great leader.

This may be especially true as individuals move up in an organization.9 Why is EI so critical to effective leadership? A core component of EI is empathy. Empathetic leaders can sense others’ needs, listen to what followers say (and don’t say), and read the reactions of others. As one leader noted, “The caring part of empathy, especially for the people with whom you work, is what inspires people to stay with a leader when the going gets rough. The mere fact that someone cares is more often than not rewarded with loyalty.”10 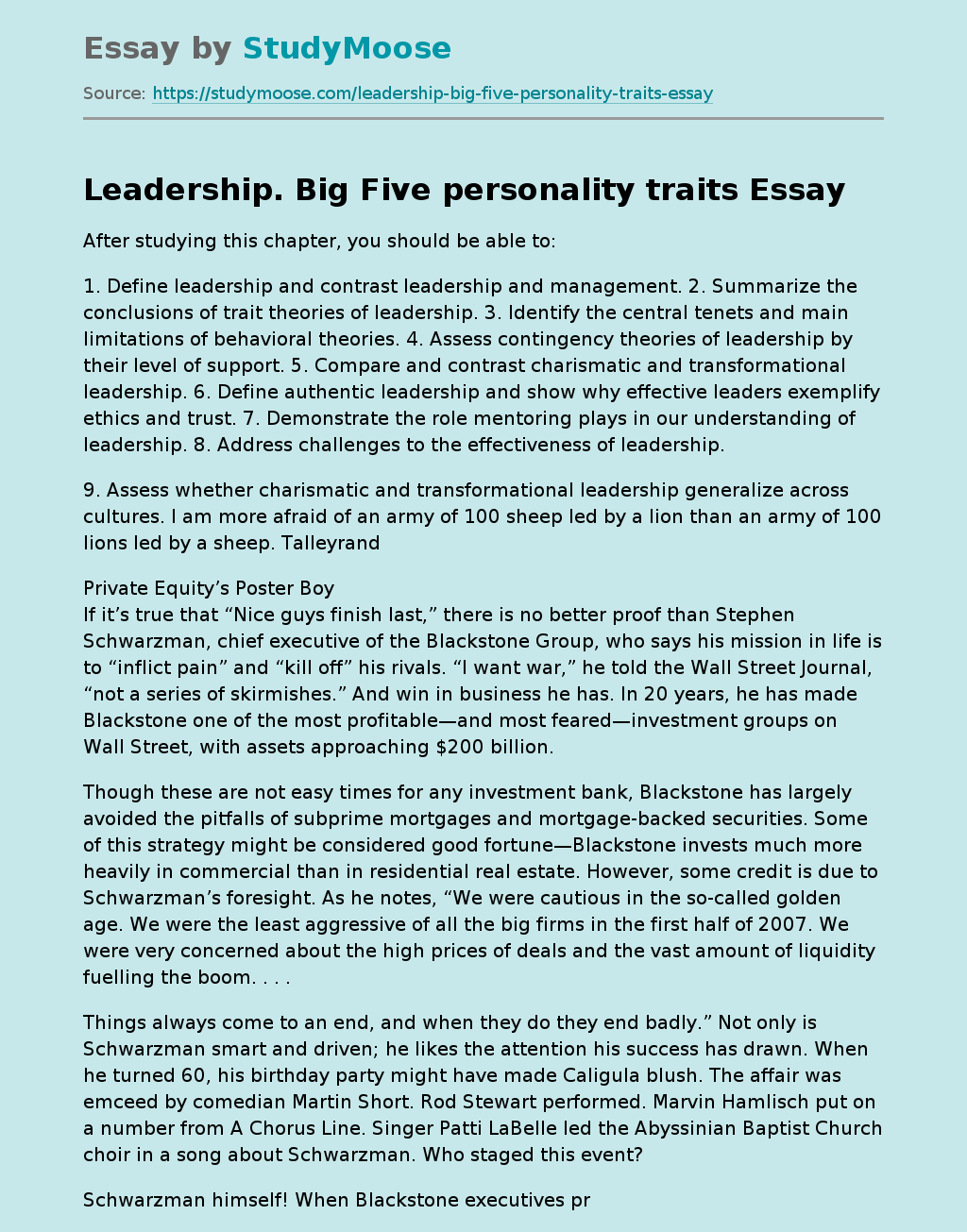