Gordan Allport, a psychologist in 1936 found that an English language dictionary contained more than 4,000 words that described different personality traits. He separated these traits into three levels: Cardinal traits, Central Traits and Secondary Traits. Cardinal Traits are the dominate traits in a person’s life, often to the point that the person becomes known specifically known for these traits. Central Traits are the general characteristics that form the basic foundation of personality. And the Secondary Traits are the traits that are sometimes related to attitudes or preferences and often appear only in certain situations or under specific circumstances.

Don't use plagiarized sources. Get your custom essay on
“ The Big Five Personality Traits: The Five Factor Model ”
Get custom paper
NEW! smart matching with writer

With the help of Allports research Raymond Cattell, a trait theorist reduced the number of main personality traits from the initial 4,000 characteristics down to 171. After identifying closely related terms he reduced his list to just 16 personality traits, he thought these 16 traits are the source of all human personality.

He developed one of the most widely used personality assessments known as the Sixteen Personality Factor Questionnaire.

A British psychologist Hans Eysenck also developed a model of personality based upon three universal traits. Introversion/Extroversion, a person high in Introversion might be quiet and reserved and a person high in Extroversion might be sociable and outgoing. Neuroticism/Emotional Stability trait is related to moodiness versus even-temperedness , and Psychoticism was developed after studying individuals suffering from mental illness, individuals who are high in this trait tend the have difficulty dealing with reality and may be antisocial , hostile , non-empathetic and manipulative . Both Cattell’s and Eysenck’s theories have been the subjected to research.

Some theorist believe that Cattell focused on too many traits and Eysenck focused on too few. As a result, a new trait theory emerged, known as “The Big Five Personality Traits”.

The Big Five Personality theory is described as five broad domains or dimensions of personality that are used to describe human personality. Although somewhat different labels have been used for the Big Five factors, the five factors are openness, conscientiousness, extraversion, agreeableness, and neuroticism, beneath each factor, a cluster of correlated specific traits are found. Acronyms that are commonly used to refer to the five traits are OCEAN, NEOAC, or CANOE. The Big Five is a contemporary theory that is inspiring a significant amount of research. Still, it is premature to say that there is a clear consensus. Although there is a high level of agreement that there are five dimensions, there is some disagreement or disputes concerning the exact nature of each of the five factors. Scholars don’t even always use to same five terms. To further discuss the five terms here are some of the traits and characteristics of them. Openness is referring to the openness to experience.

Open people are intellectually curious, appreciative of art, and sensitive to beauty. They tend to be, compared to closed people, more aware of their feelings. They tend to think and act in individualistic and nonconforming ways. People with low scores on openness to experience tend to have narrow, common interests. Conscientiousness concerns the way in which we control, regulate, and direct our impulses. Impulses are not always bad, occasionally time constraints require a snap decision, and acting on our first impulse can be an effective response. Conscientious individuals avoid trouble and achieve high levels of success through purposeful planning and persistence. They are also positively regarded by others as intelligent and reliable. On the negative side, they can be compulsive perfectionists and workaholics. Extroversion is marked by pronounced engagement with the external world. Extroverts enjoy being with people, are full of energy, and often experience positive emotions.

They tend to be enthusiastic, action-oriented, individuals who are likely to say yes or let’s go to opportunities for excitement. In groups they like to talk, assert themselves, and draw attention to themselves. Agreeableness reflects individual differences in concern with cooperation and social harmony. Agreeable individual’s value getting along with others. They are therefore considerate, friendly, generous, helpful, and willing to compromise their interests with others’. Agreeable people also have an optimistic view of human nature. They believe people are basically honest, decent, and trustworthy. Neuroticism refers to the tendency to experience negative feelings. Those who score high on Neuroticism may experience primarily one specific negative feeling such as anxiety, anger, or depression, but are likely to experience several of these emotions. People high in Neuroticism are emotionally reactive. They respond emotionally to events that would not affect most people, and their reactions tend to be more intense than normal

The Big Five arose from two different attempts to identify the basic factors of personality. One was the study of language which led to a descriptive model of personality traits that has been replicated across different languages. The other was the factor analysis of personality questionnaire, which led to an explanatory hypothesis, the five factor model, about dispositional biological traits that are substantially inherited. The initial support for the Big Five came from the analysis of language, specifically words that describe personality.

An English scientist, Sir Francis Galton was one of the first to propose to “lexical hypothesis” that suggests that there are significant differences among people that affect how they interact with other people. Over time people began to recognize and label those traits that were crucial for interpersonal relationships. These words are frequently used to reflect our understanding of the world and other people. The second source of support for the five basic factors emerged from the analysis of personality questionnaires and ratings. This activity led to the Five Factor Model. Questionnaires developed by Cattel and Ensyeck were used, but most of the research in this area was done by Paul Costa and Robert McCrae. Costa and McCrae developed and refined an objective assessment device that measures the personality dimensions of the FFM (Five-Factor Theory).

Costa and McCrae were hesitant about moving from language-based descriptions of personality to conclusions about its basic structures. There is plenty of research that is associated with the FFM that include case studies (Costa & McCrae 1998 m McCrae 1993-1994) , longitude studies (Costa & McCrae 1992) and cross-cultural studies ( McCrae, Costa, del Pilar, Rolland & Parker 1998) . It has led to significant findings concerning the origins, development, and functioning of personality traits and have inspired and reinvigorated trait psychology. Their Five Factor Model seeks to provide an overview of the functioning of the person throughout the lifespan based on the research. The main components of the personality system are basic tendencies, characteristic adaptations and the self-concept.

There are differences between the Big Five and the Five-Factor Model. According to Saucier and Goldberg, the big five, stemming from studies of language, simply provides a summary description of attributes. No assumptions are made about whether or not the traits actually exist or about their possible cause, it was purely a description. The FFM is an interpretation of the Big Five factors, it seeks to advance some additional claims that do not necessarily follow from the discovery of five basic dimensions in language. The first thing it does is asserts that we can describe personality structure in terms of five broad categories, each category which includes more specific attributes and that individuals can be described by their scores on the measure of the broad concept . Then it suggests that differences between people in these dimensions are stable over time, have a genetic basis and are due at least in part to some still to be specified internal mechanism. Lastly the FFM sets forth additional farther reaching theatrical claims than the Big Five.

Research on the Big Five has resulted in several applications. Most research has been successfully used to predict job performances. Many of the traits reflected in the Big Five structure are related to those needed for positive achievements in work. Measures associated with the dimension of Conscientiousness are often helpful in predicting job success, as are measure related to Agreeableness. Looking at some of the measure in terms of requirements for successful performance in specific occupations may permit employers to make intelligent decision concerning job candidates. Earlier use of personality measures by employers led to the problem of faking and low validity. However newer data suggests that well developed personality measures can successfully predict job performances and increase fairness. Personality measures can also contribute to the prediction of job satisfaction. 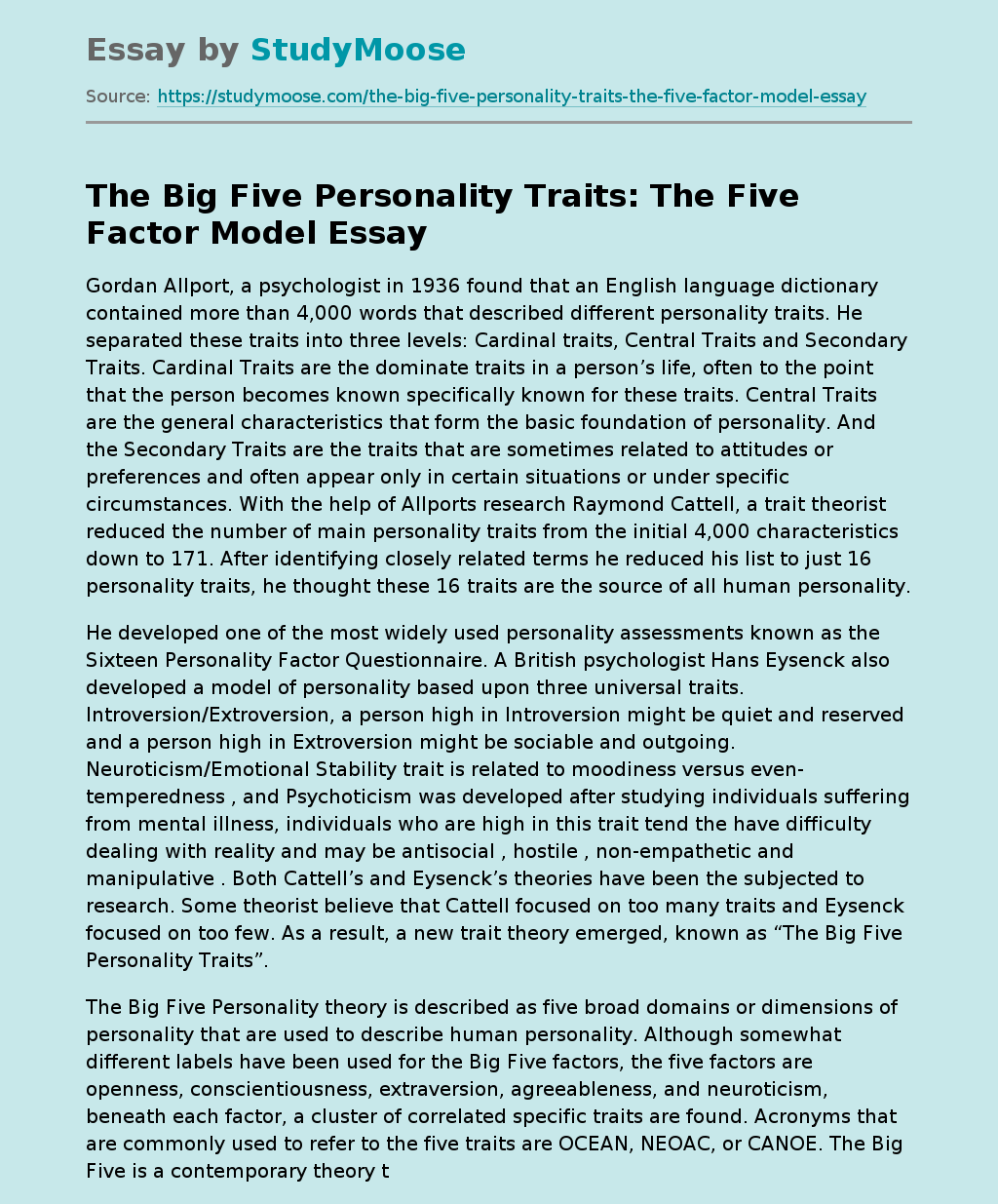