In this assignment I will analyze the “Crimson Tide” based on OB topics which are organization, skills, personality, perception, values, and attitudes. First of all I would like to say something briefly about the movie. On a US nuclear missile sub, a young first officer stages a mutiny to prevent his trigger happy captain from launching his missiles before confirming his orders to do so. An organization is basically consciously coordinated social unit. There are three essentials to be an

When we look at the Crimson Tide we can see the all three features in that submarine.

Turn in your highest-quality paper
Get a qualified writer to help you with
“ Big Five Personality Model of Crimson Tide ”
Get high-quality paper
NEW! AI matching with writer

First of all they are group of soldier in a nuclear submarine. Secondly, this group of people are not together but they came together to a project that U.S. Navy nuclear submarine, USS Alabama, to be available to launch its missiles in a preemptive strike if Radchenko attempts to fuel his missiles.

It is enough to be an organization for a group. Thirdly, even though they use different ways, they have a common goal which is protecting their country.

Most distinct skill of Captain Ramsey his experience and loyalty to the Navy. He never questions to orders. He thinks he is there to apply to the orders, sometimes impatiently, and make sure his crew’s loyalty to apply order. He does not believe to democracy in the submarine. For example he says “we are here to preserve democracy, not to practice it.

Ron Hunter is a young, inexperience, and good educated man. He finished Harvard University. He is highly educated in military history and technical tactics. Hunter is more analytic and conservative towards his mission. Hunter is against the missile launch and tries to win over support from Ramsey to confirm the second message before proceeding with the launch, because he has hope that it was possibly an abjuration of the previous command. This behavior shows his humanist and rational side. Hunter plays a number of roles.

He makes sure that Captain Ramsey makes the correct choices. For example, he is waiting the rest of the message to launch of the nuclear missiles. Also he motivates his crew. Ramsey is a strict and arrogant leader who never motivates his crew, but with the influence from Hunter, Ramsey gives a motivational speech after the crew to restore all operations after the Russian attack. I will focus on Ramsey’s and Hunter’s personality, perception, values and attitudes in this part of my assignment;

Job satisfaction: work place is like his home….(e.g. dog)

Neglect: when hunter took his authority he went to his cabin and was listening to the music like nothing happened before Affective: emotional relationship to the navy. Traditional beliefs Engagement: His speech to the soldiers at the beginning of the film.

Job satisfaction : He is proud of to be a lieutenant
Continuance: Wants to make career upgrade to a captain
Engagement: Build a good relationship with the crews 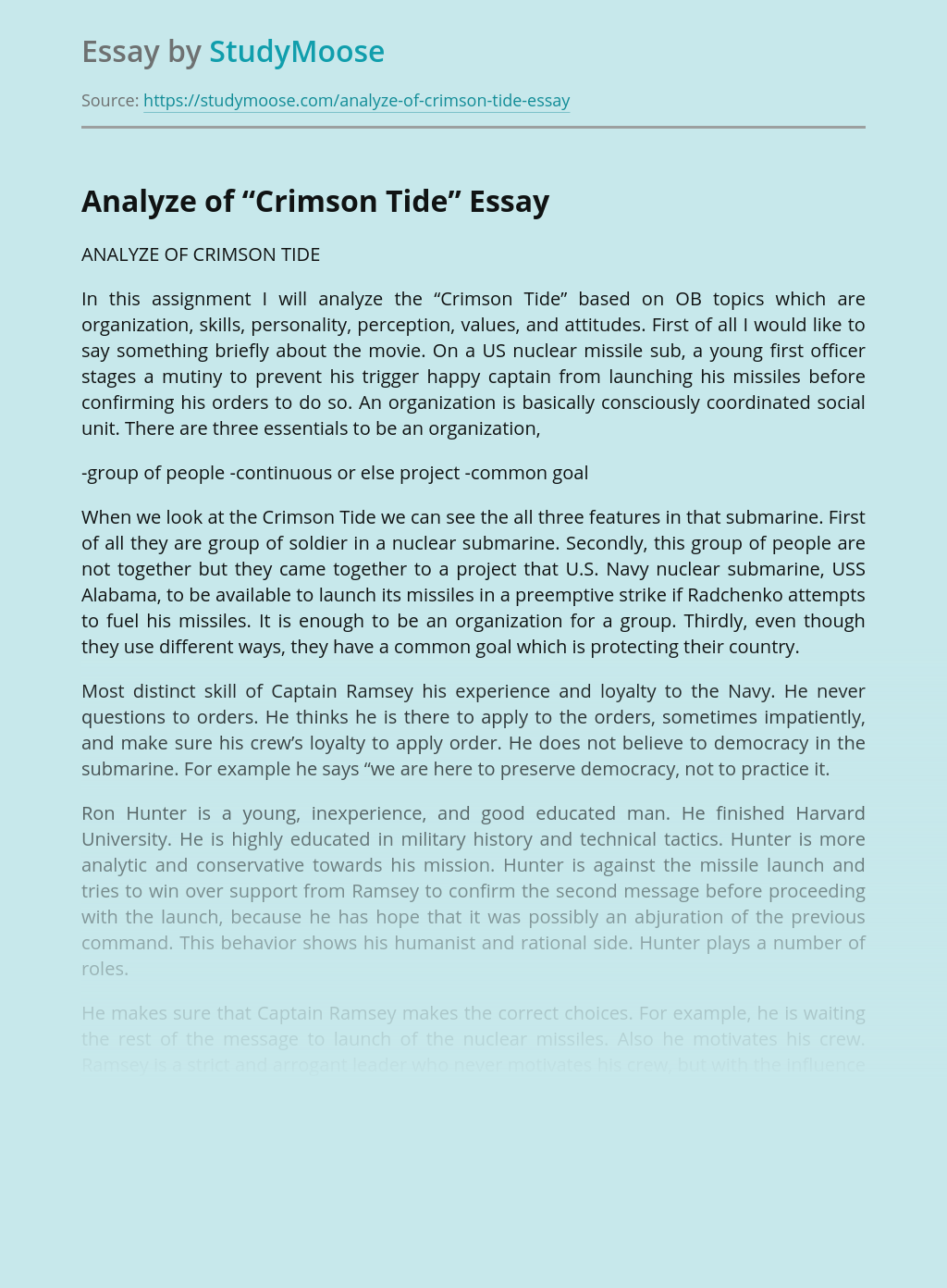 Turn in your highest-quality paper
Get a qualified writer to help you with
“ Big Five Personality Model of Crimson Tide ”
Get high-quality paper
Helping students since 2015
Stay Safe, Stay Original