Rizal arrived in Manila with his sister Lucia on June 26, 1892 on board the steamer, Don Juan. They stated at the “Hotel Oriente” in Binondo, their room is facing the Binondo Church. He started his campaign for his family and for La Liga Filipina.

Turn in your highest-quality paper
Get a qualified writer to help you with
“ Persona of Rizal and La Liga Filipina ”
Get high-quality paper
NEW! AI matching with writer

He went to Gov. Gen. Evlogio Despujol, whom met him by several times, for pardon for his father, brother & brother’s in law. On the night of his arrival, he met with Apolinario Mabini, Andres nBonifacio, Ambrocio Salvador, Timoteo Paez, Pedro Serrano Laktaw, Deodato Arellano & other Patriots to discuss about La Liga Filipina. He visited some provinces odf the North like Malolos, Bulacan, San Fernando Pampanga and Bacolod. He was invited to dinners & talked to Filipinos. But for the Spanish Officials, his travels were interpreted as attempts to agitate the people against the Spanish Government on July 3, 1892, he founded the La Liga Filipina in the house of Doroteo Onjvco at Ilaya St.

Rizal was summoned by Gov. Evlogio Despujol to Malacanang were found in Lucia’s pillows by inspectors when they arrived from Hong Kong. Printed on these handbills were anti-friar articles like Pobres Frailes (Poor Friars) supposedly authored by Fr. Jacinto and printed by Imprenta de los Amigos in Manila. The Spanish authorities concluded that this written by Jose Rizal. Suddenly, Gov. Gen. Despujol ordered his arrest and detention at Fort Santiago & was exiled to the southern part of the Philippines.

On July 14, 1892, under heavy guard & shrouded with secrecy, he boarded the steamer Cebu and reached Dapitan on the 17th of July. He was handed by the Cebu’s captain, Capt. Ricardo Carnicero (politico-military government of Dapitan). The Spaniards colonized the Zamboanga in order to serve as the first line of defence against the Muslims. Missions were established by the Missionaries of the Society of Jesus after the Spaniards settled in Zamboanga. Their headed in Dapitan a settlement with irregular coastline and natural harbours but was situated along a river located in parts of North Zamboanga.

Fr.Pastells SJ, the superior of Jesuit Society in the Philippines who was Rizal’s adviser in his high school in Ateneo sent him a book by Sarda and advised him from viewing religion based on his personal judgment. From these Rizal’s stated God, Man’s intelligence and other aspects related to the Catholic Dogma.

Rizal’s warm, genial & cultivated attitude won over Capt. Carnicero. They allowed Rizal to go around & engaged in different activities. Rizal also won the second price in a lottery amounting to Php20,000, he get Php6,200 as his share with Captain Carnicero & Francisco Equiloz.

He wrote a letter to Dr. Blummentritt, dated, Dec. 19, 1893 which he describes his fruitful life in Dapitan. He lived in 3 houses. He has many fruit trees, animals and plants. He planted fruit trees and introduced to the people of Dapitan the European methods of farming. He also engaged in trade. He undertook a trading business in hemp with a Dapitan businessman, Ramon Carreon. Here, he had a stable in come. Rizal was kept constant contract with his scientist friends & Professional in Europe including Dr. Rost of London, Dresden, Professor Boettger and Dr. Carl M. Heler, as an educator, he opened a school & was attended by selected boys from prominent family of Dapitan. He had 16 students who didn’t pay for their tuition fee but instead worked on different projects. He intended to beautify Dapitan not only for aesthetic purposes but for sanitation aspects as well.

There were many inventions by Rizal. He devised a lightning system to light up the streets of Dapitan using lamps filled with coconut oil. He modelled an invention on a Belgian example of making bucks and he invented a unique lighter made of wood using the principle of compressed air. He successfully operated his mother’s eyes. On Rizal’s love life he fell in love with Josephine Bracken, who is a companion of Mr. George Tauffer, one of his foreign patients. But Mr. Tauffer refused to allow Josephine to be with Rizal.

The Catholic Church refused to marry than unless Rizal converts back to Catholics and sisters of Rizal didn’t approve of Josephine, because they love each other they lived together and had a son who was born prematurely and died after 3 hours. Rizal baptized him Francisco and buried him.

In 1896, a revolution was planned by Katipuneros. Dr. Pio Valenzuela was sent to Dapitan to inform Rizal. But Rizal was opposes to the plan because people was not ready for a revolution. Dr. Blumentritt suggested to Rizal to volunteer his services to Spanish Government and join their forces as a doctor in Cuba because of the situation of Cuban Revolution. In this way, Rizal exile can be ended. He sold his lands in the people of Dapitan. In his diary, he noted that he lived there for four years, 13 days and few hours. He boarded the steamer, Espana and reached Manila on August 6, 1896. 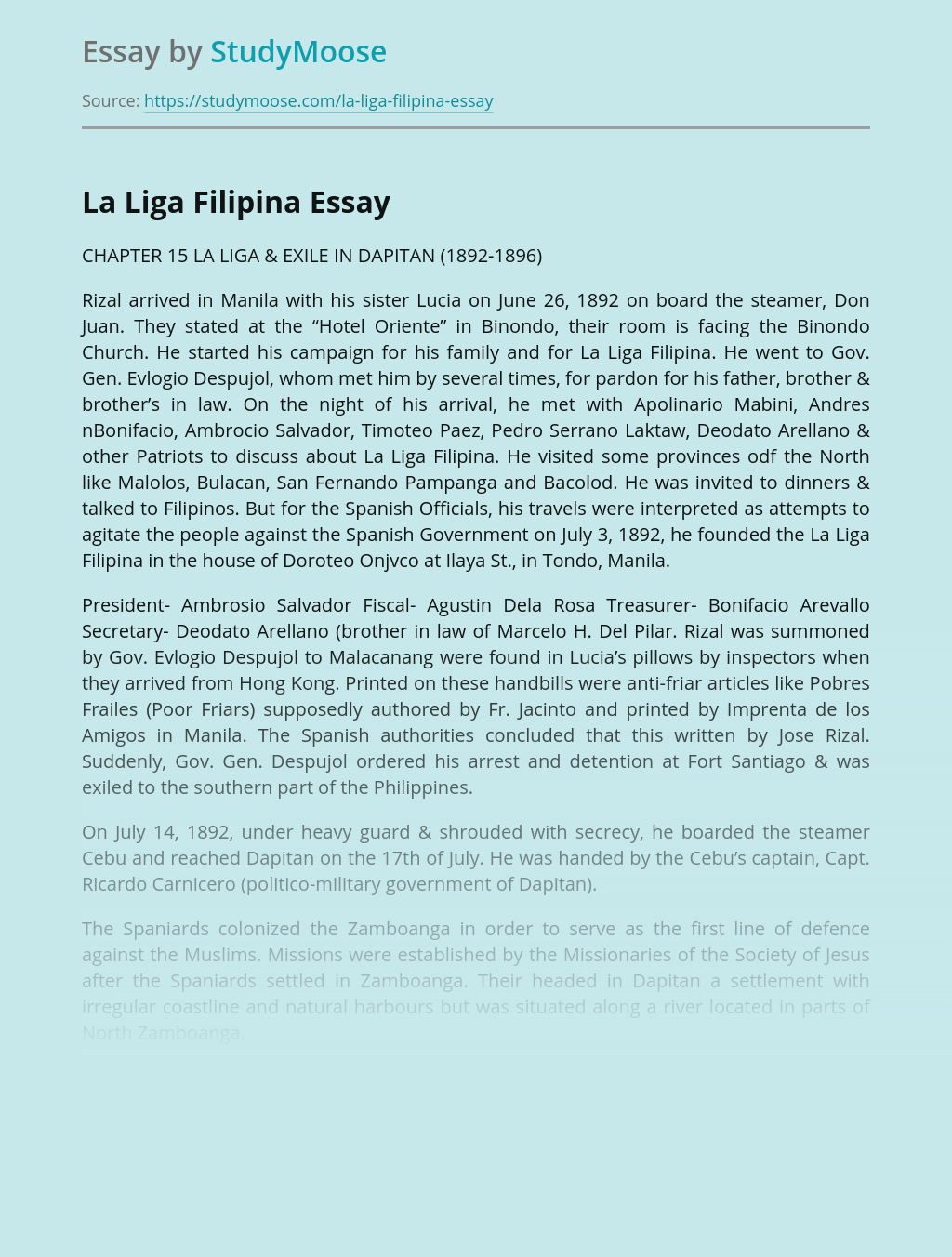 Turn in your highest-quality paper
Get a qualified writer to help you with
“ Persona of Rizal and La Liga Filipina ”
Get high-quality paper
Helping students since 2015
Stay Safe, Stay Original