Character Analysis of Lara Croft in the Tomb Raider Franchise

This ‘attention to detail’ would seem to support the representation of Lara Croft as a cyber bimbo as there is a strong emphasis on her being a ‘sex symbol’. This view point is supported by the general media, despite the creator of Lara Croft (Toby Gards) intentions for her to be sexy “only because of her power”. This can be seen through Robert Ashley of Official U.S. PlayStation Magazine description of Lara Croft as the first video game character openly thought of as sexy plus moreover Publications like Play, GameTrailers, and PlayStation Magazine listed big breasts as one of the character’s most famous attributes.

Don't use plagiarized sources. Get your custom essay on
“ Character Analysis of Lara Croft in the Tomb Raider Franchise ”
Get custom paper
NEW! smart matching with writer

Her sex appeal is so great that male players perform in-game actions to make Lara Croft repeatedly say phrases and view closer camera angles of her bust, while pornography featuring the character has been distributed via the internet.

This viewing is not helped by the clothing she wears throughout the games. An opossitional sexist view arises from the fact that she is even sexualised through her attire when partaking in the action of the game.

Throught the various Lara Croft games her outfits change correspondlingly to the missions, all baring emphasis on the thighs and legs, becoming more and more revealing. Outfits such as the ‘Dressing gown’ ‘Bikini’ and ‘Evening Gown’ in particular help pay homage to her ‘unobtainable’ attriubtes which make her such an errotic charcter. This differs greatley from the other male gaming protagonists generally in the media such as Max Payne or Hitman.

Where we see it the norm for lara to parade around shooting people in almost her underwear it would be a very different story if hitman turned up to his mission wearing only boxers instead of his infamous suit.

My personal opinnion on Lara varies in the context in which she is portrayed. I believe elements of the concept of Lara Croft bring to mind the implications of Sex thus fitting one of the views as her being a ‘Cyber Bimbo’. However it is true that alot of her attributes and actions can also show her in a more positive light as a ‘Feminist Icon’. Lara is a tough, independent woman, and an adventurer, who confidenly flinch from fighting men. Her hobbies consist of free climbing and shooting, which are uncommon and emancipated for a woman and she therefore breaks away from traditional gender roles. Many can say she more closeley fits a stereotypically male role, which may be due to the orignal character concept being a male.

Her success may be a result of her body being so excessively exaggerated thus providing an example of how women are being reduced to relative creatures who can only be defined by their relation to men. However it would be an unfair argument to simply pin her success on her ‘enourmous boobs’ and ignore the other defining features of this likeable character.

Lara Croft as a game in many ways can be as a respectable product. being one of the first female protagonists she helped expand the market to a wider audience, inviting more female gamers. The majority of the ‘Cyber bimbo’ critizism developed from the merchandise which appeared as part of the Tomb Raider franchise, such as magazine publications sporting lara in a sexually provacitive way, which was critized by the games designers and the commericials she features in, not the game itself. 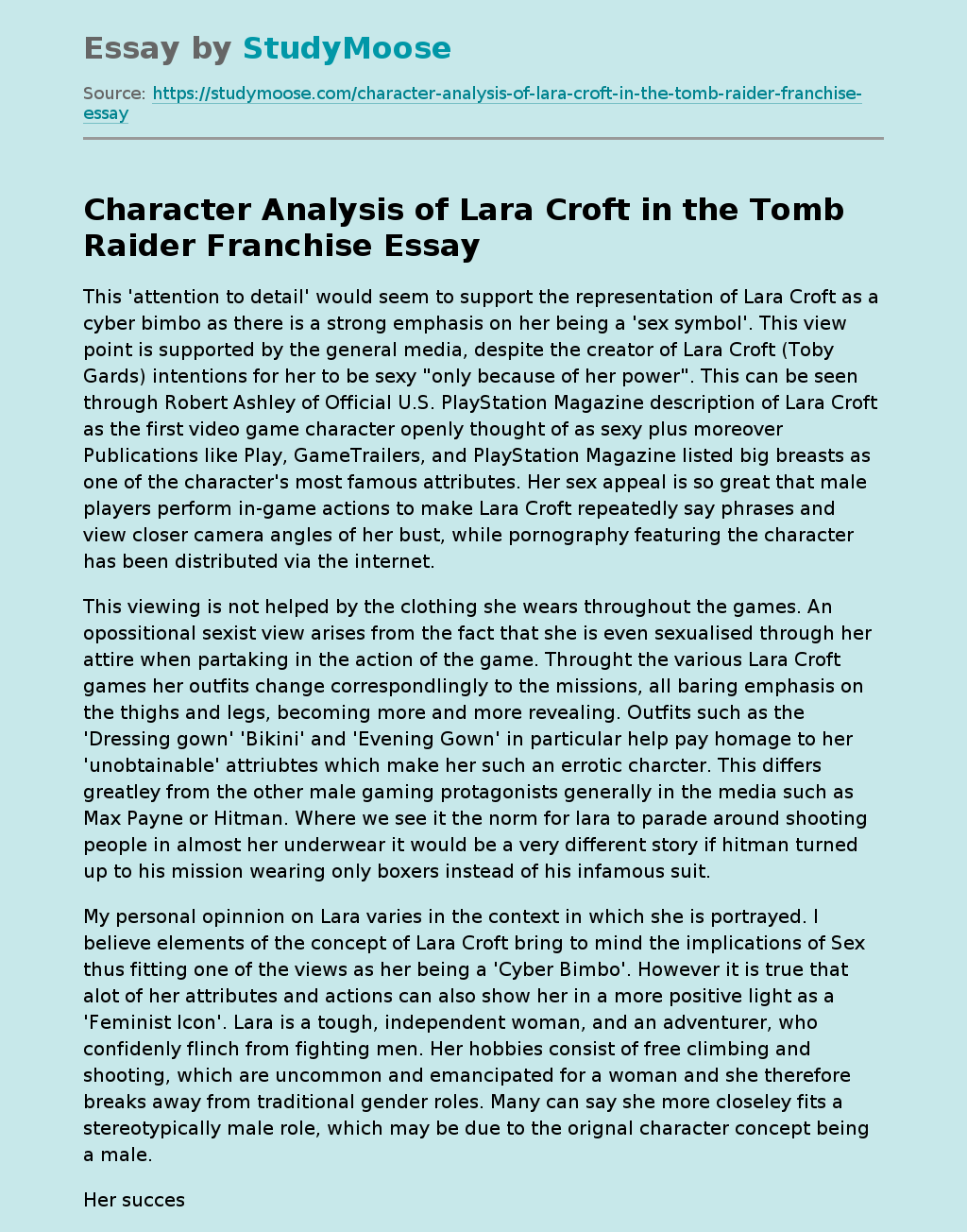