According to Schwichtenberg (1993) “the discourses activated by the text of the Material Girl video are complex and contradictory”, paralleling Kellner’s opinion. Although the video depicts a strong, independent woman who places no value on wealth and who displays a tongue-in-cheek attitude to such a lifestyle, she is manipulated by the male character into thinking he is the opposite of what he appears to be.

So, on one hand Madonna appears to be anti-materialist and upholding feminism views of being self-sufficient, whilst on the other hand she acquires both the man and his wealth without having actively sought them.

Don't use plagiarized sources. Get your custom essay on
“ Madonna’s antimaterialism and feminism ”
Get custom paper
NEW! smart matching with writer

In such a way, Madonna is cleverly seen not to be endorsing bourgeois ideology whilst acquiring both wealth and love. Cleverly, Madonna created videos that attracted attention to her imagery through the use of fashion and her sexual appeal that could be read on different levels depending upon the individual viewpoint.

The interpretation of how consumers read meaning into Madonna’s work is looked at by Kellner (1995) and John Fiske (1987 and 1989), who each suggest an alternative view.

Kellner is suggesting Madonna’s work can be read on multiple levels allowing consumers to receive and interpret her representations in very different ways. In this way Madonna is able to employ “highly successful marketing moves that endeared her to large and varied youth audiences” (Kellner 1995).

Kellner is inferring that the audience cannot be viewed as ‘cultural dopes’ whereby the audience is “manipulated at will and against their own interests by the moguls of the culture industry” (Fiske 1987) which is explained by Michael Real (Exploring Media Culture 1996), who says “Madonna’s text is appropriated by the reader/viewer/listener as a meaningful discourse and is meaningfully decoded”.

Kellner acknowledges the importance of the audience being active in terms of their individual schema which allows a person to equate their own personal experiences and therefore to find them mirrored in Madonna’s work.

For example, young women are empowered by Madonna to be in control of their own destiny and being able to ‘have it all’ in terms of love and money, whilst she also invites the possibility of interracial relationships and therefore appeals to an wider audience than just the white community. Fiske (1987), in contrast, argues that people can be expected to react in certain ways and that these responses are predictable based upon general assumptions about their group. In such a way Madonna is able to ‘hail’ (attract) certain types of people with certain messages and images.

For example, Madonna is able to attract males who would not otherwise be interested in her work by presenting herself as a sexually overt female, whereas she ‘hails’ young women because of her continually changing image in terms of new fashion, which calls into question whether Madonna is in fact an “agent of patriarchal hegemony” (Fiske 1987). In his In 1989 Fiske wrote again on the subject of Madonna in his book ‘Reading the Popular’ stating that he sees Madonna as a “site of semiotic struggle between the forces of patriarchal control and feminine resistance, of capitalism and the subordinate, of the adult and the young”.

Therefore, it can been seen that both Kellner and Fiske are supporting the idea that Madonna is counter-hegemonic but at the same time offers contradictions in regard to the interpretation of her work. In his article Kellner writes that Madonna has “helped bring marginal groups and concerns into the mainstream” but that there have been strong arguments against this, notably by bell hooks a black feminist who writes in her article ‘Madonna: Plantation Mistress or Soul Sister’ (www.thecriticalvoice. com) “… the image Madonna most exploits is that of the quintessential “white girl. ”

To maintain that image she must always position herself as an outsider in relation to black culture. It is that position of outsider that enables her to colonise and appropriate black experience for her own opportunistic ends even as she attempts to mask her acts of racist aggression as affirmation.” hooks is implying that Madonna favours the “blonde look” over her natural dark hair and is therefore using black culture to further her own ambitions rather than attacking racial issues. In ‘Deconstructing Madonna’ (Lloyd 1993) Andrew O’Hagan discusses one of Madonna’s most controversial videos, ‘Like a Prayer’ which “fuses religion and eroticism” (Kellner 1995) showing Madonna dancing very provocatively in front of burning crucifixes and involving images of the Ku Klux Klan. 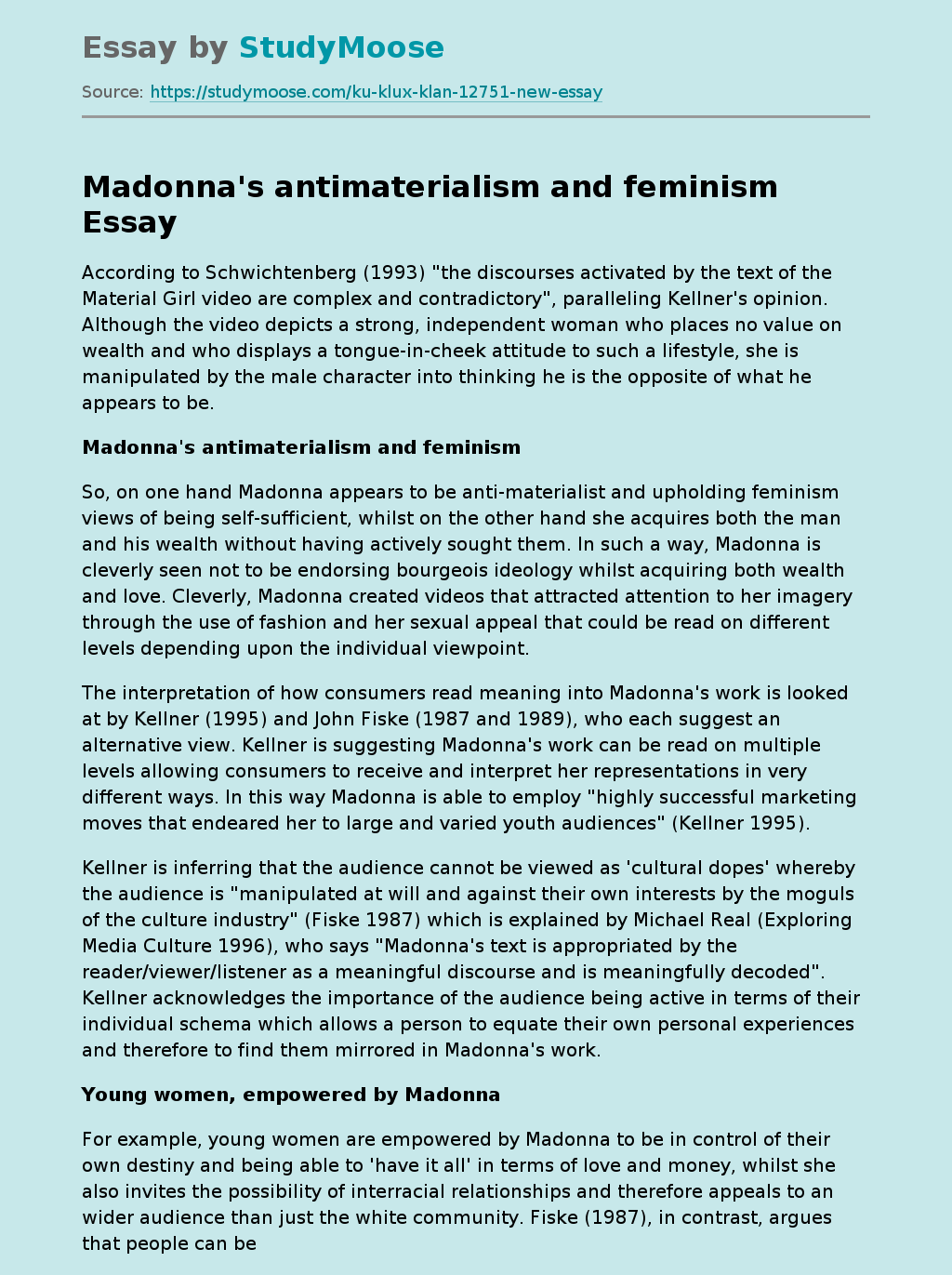