The “Madonna del Prato” is renaissance painting by Raphael Sanzio, once a student of Perugino. Raphael is best known for his “Madonna” paintings, The “Madonna del Prato” along with others is believed to have been influenced by Leonardo. The line in “Madonna del Prato” doesn’t seem infinite, they tend to end and begin somewhere else creating the whole picture and bringing it all together as one picture. For instance the mountains and town in the back are created using different lines than the field and trees, or the Virgin Mary with Jesus and St.

John. The trees seem to be made up of multiple dots to create the look. The shapes of the painting seem to be well defined, the faces are clear and recognizable, the hills are separated from the sky and the town. The shape of the trees and flowers are unique to one another.

Raphael makes moderate use of strong contrast between light and dark colors, also known as chiaroscuro, and uses extremely soft and fine shading instead of line to describe and portray the different forms and features.

He created uncomplicated round figure types and show a sense of serenity. The painting shows a very calm style. The mass of the painting is quite bulky in the frontal part of the image, for example the images of Mary, St. John, and Jesus are very big and round. They are a lot clearer and more the focal point of the image than the background. The buildings and hills, along with the trees and flowers all seem to be less out of focus and less extroverted in the painting.

The texture of the painting seems to vary depending on the shape you are looking at, and what you are focusing on. For instance the texture of the skin seems to be quite soft, it seems to have an actual texture. While as you take a look at the clothes on the people in the image, they seem to be rough and coarse. In the images of the hills and trees there are textures of impasto in it as well. The visual texture lies in the flowers and leaves. The people as a whole seem to have a subversive texture as they tend to make you take a second look and examine it more intimately.

The space behind the images of Mary, St. John, and Jesus is vast and wide, as it goes on for perhaps many miles behind them into the city. While the up close images of the people show less space due to the bulkiness of the persons in the image. There is a lot of overlapping going on in the painting, from the two babies overlapping the Virgin Mary, along with the hills behind them and the trees. The linear perspective seems to be painted in a one point perspective as you can see the images seem to get smaller and smaller as you go straight back, while also using atmospheric perspective to show the illusion of depth in the everlasting sky.

Implied motion and implied time are both found in the “Madonna del Prato” with the use of lines that seem to simulate motion from left to right. The motion is seen in Jesus reaching for the miniature cross being held by St. John while the Virgin Mary holds him up to ensure he doesn’t fall. The balance of the image is also show there is the same aspect. There is a type of unity going on in the image as well, as you can see the persons conjoining together and seemingly overlapping. The rhythm is this particular painting is found is the hills slightly behind the people of the image, as they all are constant and flowing.

The scaling in the image is excellent, the proportion and size differentials from the babies to the Virgin Mary, and the size of the mountains in the background seem to get smaller, there are two different layers of mountains, one bigger than the other because one is presumed further than the other. Hierarchical scaling is used to show the importance of the people in the image compared to the other objects in the painting.

Although Raphael himself was not religious, he created paintings that appealed to the masses. The “Madonna del Prato” in particular is actually the subject of religion. As stated before the three people in the painting are the Virgin Mary, St. John, and Jesus. Another way of determining this is the see the staff that St. John is holding, as a small cross is at the tip of it. It is currently displayed at the Kunsthistorisches Museum, or in english the “Museum of Art History” in Vienna. The “Madonna del Prato” shows the encounter between the baby Jesus and the baby St. John Baptist. St. John the Baptist is thought to have seen Jesus as the Redeemer even all the way back to their childhood, which is why Raphael shows us this by having Jesus take the cross from him. 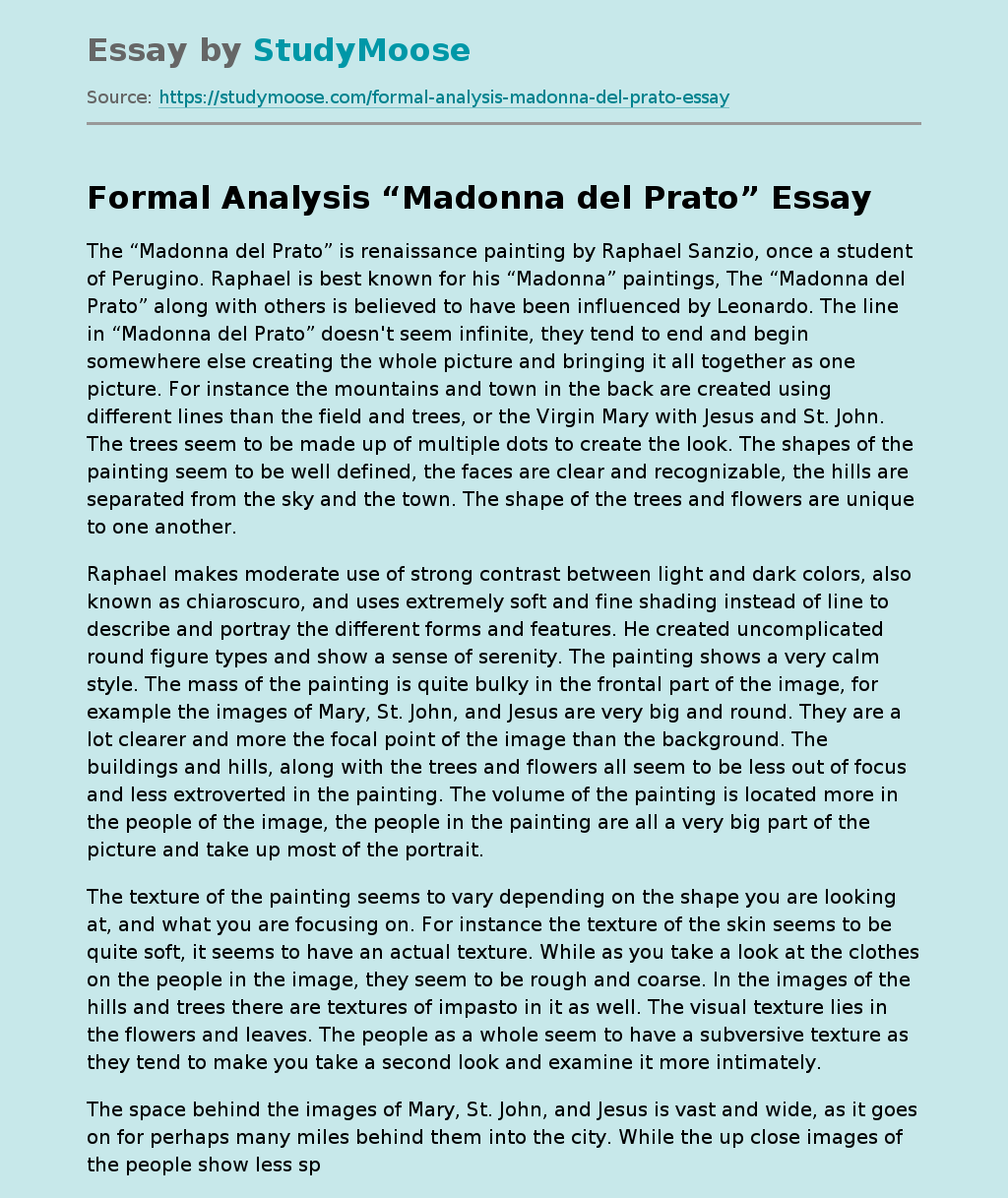