Madonna of the Meadows

In the history of art, one of the main goals of the artists has been to create a realistic and innovative art. Every era invented its own way of achieving this effect and when the paintings are compared, there are always pieces that are more realistic and innovative than the other. The search for exact representation of the real world has lead to very impressive results. The High Renaissance period brought about a great cultural movement in terms of scientific revolution and artistic transformation at the dawn of the modern European history.

Don't use plagiarized sources. Get your custom essay on
“ Madonna of the Meadows ”
Get custom paper
NEW! smart matching with writer

The “Madonna of the Meadows” is a classic example of great piece of art painted by Raphael during this period. This masterpiece is painted with tempera and gold on wood. The mood of the painting is calm, intent, serious, traditional and conservative. This painting was hung in the part of the church that was reserved for nuns and hence the nuns asked for Raphael to depict the Christ Child and infant Saint John the Baptist in the painting to be fully clothed.

The patronage from the nuns also accounts for the painting’s conservative style and the emphasis given to gold decoration.

All eyes are drawn towards this picture as if we are present on the scene. It is a quietly intense painting that captures everyone’s attention and it feels as if the figures in the painting speak to us. We do not need a narration for the theme of the painting. Each figure is involved in its own thought and is individualized by personality that is represented through the gestures and gazes.

These make the painting look more realistic. Raphael has very eloquently used the scientific perspective to depict the conservative idea.

During the High Renaissance period every detail in a painting was well planned out and intentional. In “Madonna of the Meadows”, Raphael has effectively used the vanishing point in the painting. It is located exactly on the subject of the painting, in order to reinforce the message. Raphael has placed it on the hand of Christ Child whose gesture represents “the blessing”. However, we can also observe that even though there is perfect scientific perspective, the environment perspective is barely shown. In fact, it is to the basic and minimal.

But from his other paintings, we know that Raphael is an absolute master of perspective and we see his high ability to create perfect environmental perspective as well. Still, in this piece it is probably kept simple on purpose as to concentrate on the religious meaning, since it was being painted for the church. The landscape doesn’t seem to be closely observed and almost feels like Raphael is painting it from his memory or even imagination. This has failed to give a realistic image to the background, but was it or was it not intentional is debatable.

Raphael’s innovativeness is proved in this painting through the underlying geometry. This isn’t as obvious as in paintings from Early Renaissance, though it was also based on triangle. Only, his painting takes it even further making it more complicated by enclosing the triangle within a rectangle. The triangle is formed by Madonna, the Christ Child and the infant Saint John the Baptist. His innovativeness is also seen in the colors used by him. Raphael uses a variety of bright colors. However, the painting itself does not look bright.

It looks peaceful but with dark mood. The reason for such unexpected mood is the mixture of bright colors with a lot of black. Though it is not obvious, still we see the black color present in every figure, architecture and landscape as we analyze the painting closely. He is using a lot of black in shadow areas. This technique provides for a more dramatic lighting effect and high contrast. He also skillfully applies the paint with thick single strokes to create volume. Thus, he shows his mastery in representing material, light and shadow in very few strokes.

Though Raphael is capable of doing complicated patterns, he has kept the drapery look plain and simple as not to add much variety in material or textures. The “Madonna of the Meadows” is clearly a work from High Renaissance. Raphael has infused into the stiffy posed group a breadth and dignity that reflects his knowledge of the work and shows some of the key characteristic features of this period as underlying geometry, scientific perspective, humanism, dark look and classical balance.

Particularly beautiful is the way the figures fill the curved shape of the lunette. The emotional complexity of the human mind is also involved in this painting. Each figure is individualized by being involved in its own thoughts. The overall look of the painting is dark. But there is also classical balance. The figures are balanced and relaxed. Hence, “Madonna of the Meadows” demonstrates Raphael’s relatively conservative approach to Renaissance innovations.

Madonna of the Meadows. (2016, Dec 06). Retrieved from https://studymoose.com/madonna-of-the-meadows-essay 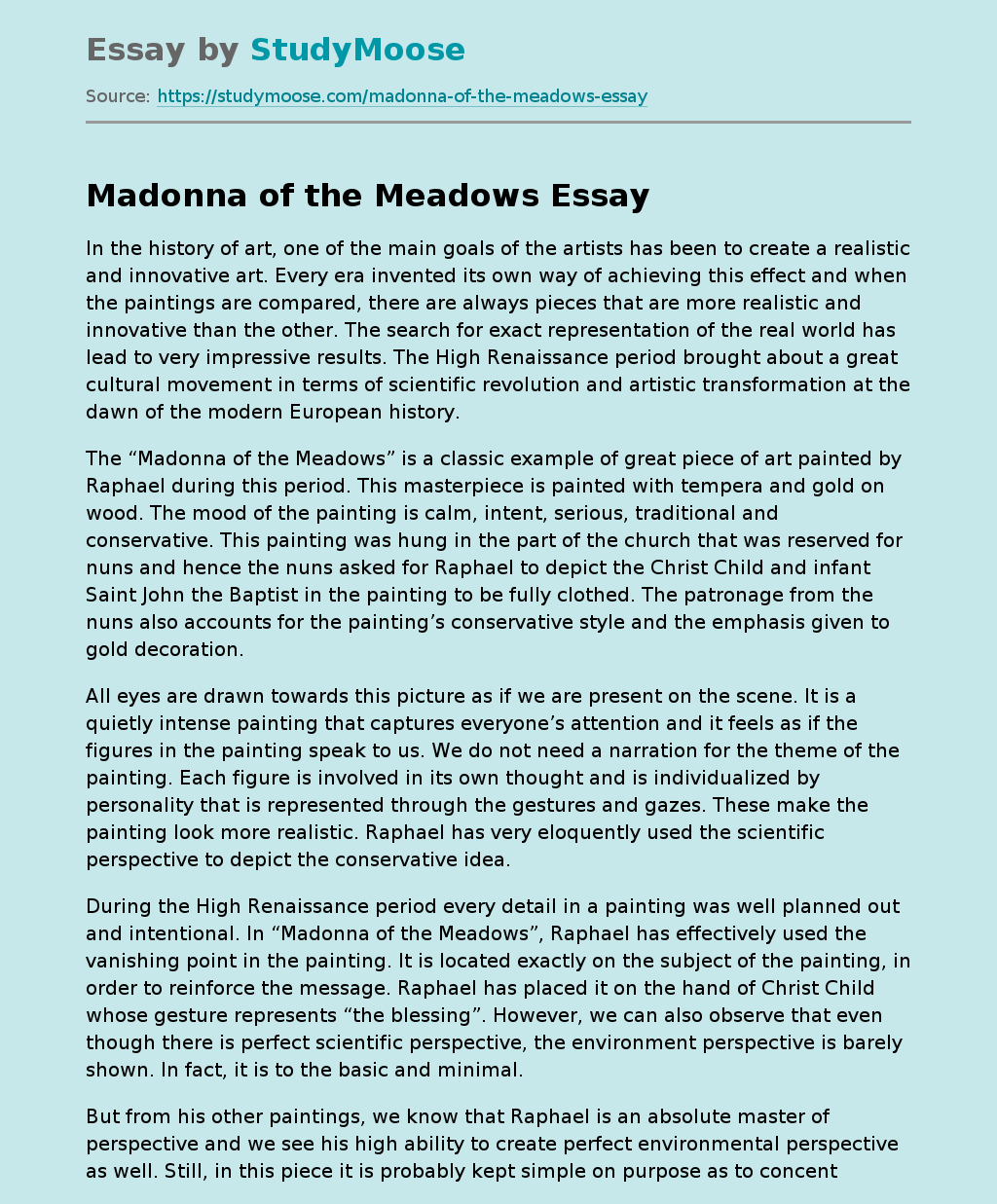