Kelo vs. City of New London

The case of Kelo v. City of New London was originally filed in the Supreme Court of Connecticut. It was based on the government’s right to attain any private property for the purpose of the community’s greater good; called eminent domain in legal language, and the opposition form Susette Kelo, owner of the real property. Kelo based her argument on the Taking Clause of the Fifth Amendment: “nor shall private property be taken for public use, without just compensation”, stating that economic development, the intended purpose of the excavation, was not “public use”.

Don't use plagiarized sources. Get your custom essay on
“ Kelo vs. City of New London ”
Get custom paper
NEW! smart matching with writer

However, on the 9th of March 2009, the case was decided in favor of the city on a cliffhanger 4-3 majority. On filing an appeal at the United States Supreme Court, the argument of the plaintiffs was based on the fact that it was unconstitutional for a property to be transferred from one private individual to another for the sole reason of higher revenue. Oral arguments were heard on the 22nd of February 2005 in the presence of only seven justices; nevertheless, all nine judges participated in the decision-making.

Although the majority opinion was formed by Justice John Paul Stevens, the concurring opinion, formed by Justice Anthony Kennedy, comprised of a more precise and detailed analysis of the argumentative context of both the parties. Kennedy designed a set of regulations that may be applied in any trial that contests the authenticity of a government plan or purpose. According to his opinion, an assessment regarding the principal beneficiary of the development plan should be made, whether it is the builder or future businesses that are set up on that land.

Moreover, it is mandatory to infer, the advantages that are provided to the city through the plan, and whether they are primarily for the city or exhibit a peripheral nature. Other significant points constituting his opinion include assessment of the present economic situation and the extent of the role the development plan would play in overcoming the economic problem, a research of any previous similar governmental plans and their outcomes, analysis of the criteria applied for the selection of the developer, and that the other beneficiaries of the development plan are unknown at present as the area has not been opened for renting out yet.

Although the decision was widely considered as a contentious one, this case was far from being the first one in which “public use” had been construed by the Supreme Court as “public purpose”. In addition, the most significant factor of the majority opinion was Justice John Paul Steven’s statement that the notion of placing developmental plans in direct benefit for the general public had been discarded by the Supreme Court a long time ago. Hence, it is clear that the decision was largely based on past cases rather than the existing evidence.

The dissenting opinion was principally based on the deduction that a regularity of these events would continue to make the rich richer and poor poorer. Justice Sandra Day O’Conner stated in the principal dissent that the party behind the developmental plans as well as the excavation of random properties would always be resourceful people that have deep ties in the nation’s political system. The transfer of a property from one private entity to a more influential private entity absolutely disregards “public use” in the Fifth Amendment.

Justice Clarence Thomas was of the opinion that it was absolutely ridiculous to side with a party that makes promises of employment and revenue with no guarantee however, and to mark it as “public use”. Furthermore, he also pointed out that the negative consequences of this practice would ultimately land on the poor society as they are the least resourceful group of them all. On the 23rd of June 2005, the United States Supreme Court upheld the decision of the Supreme Court of Connecticut with a 5-4 majority for the City of London, granting full access of the concerned property to the developers.

Kelo vs. City of New London. (2016, Sep 22). Retrieved from https://studymoose.com/kelo-vs-city-of-new-london-essay 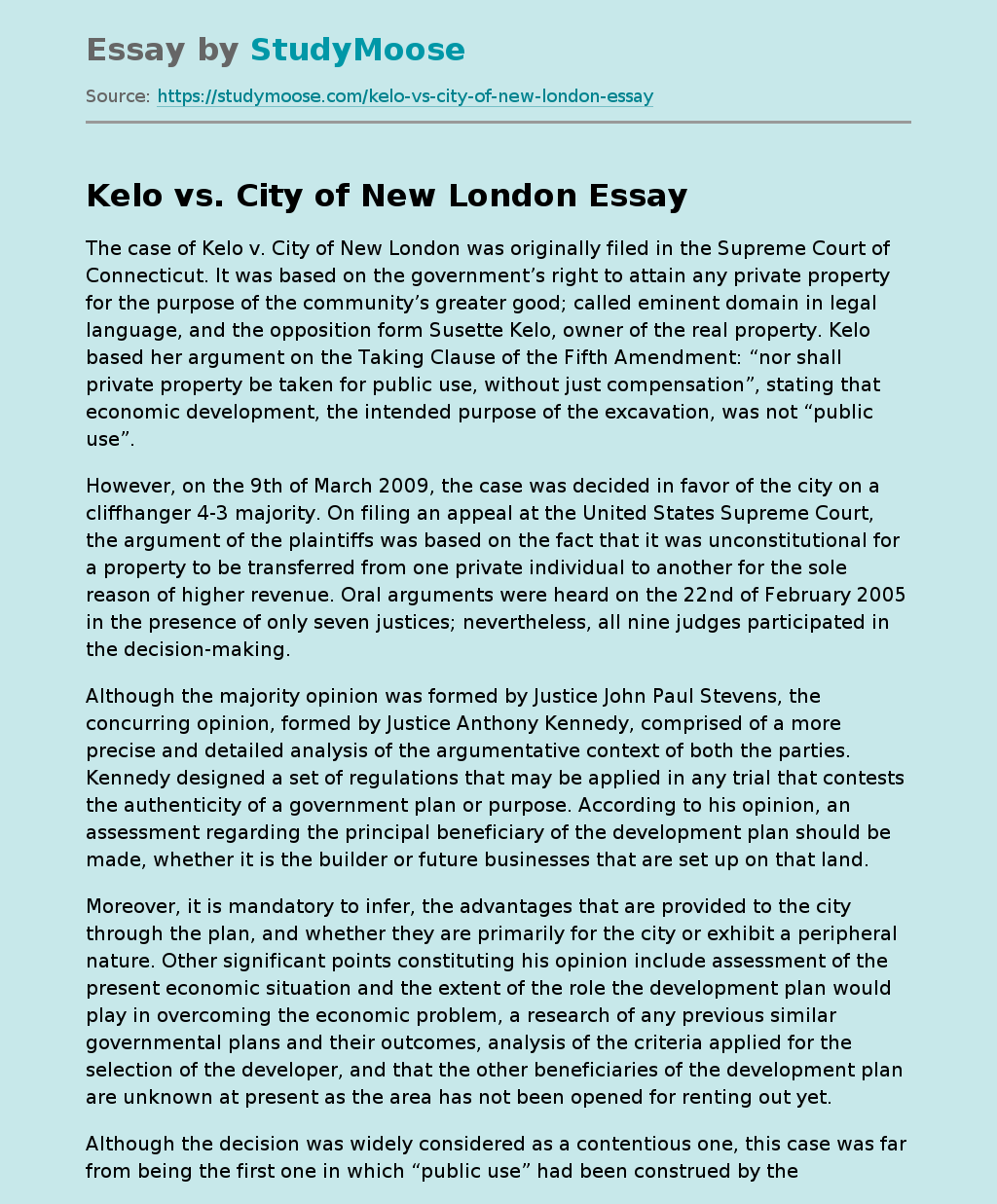