Traffic Management and Congestion in London

Currently, most large cities of the world are experiencing huge problems with traffic jams that have repercussions on financial and ecological aspects of human lives. It was identified by last researches that it takes people 30% of their traveling time to drive through traffic congestions, whilst their cars make almost 75% of total air pollution. The same problems had experienced the London city in the middle of last century. According to report of the Ministry of Transport (1964), new car registrations in the United Kingdom doubled from 500,000 in 1958 to over one million in 1963.

Don't use plagiarized sources. Get your custom essay on
“ Traffic Management and Congestion in London ”
Get custom paper
NEW! smart matching with writer

Furthermore, there was an independent survey among London residents in 1999 which concluded that the public transport and congestions are the two most “important problems requiring action” (ROCOL, 2000, chap. 2, p.5). Rising concerns about congestions in London has led to creation of the Congestion Charge Scheme which was mainly focused on finding an appropriate solution. This essay will evaluate the effectiveness of the system on solving the problem and its effects on different aspects of lives.

London is historically exposed to traffic jams. As noted by Leape (2006, p. 1), “by the 1990s, the average speed of trips across London was lower than (sic) at the beginning of the twentieth century – before the car was introduced”. Department of the Environment, Transport and the Regions (1998) stated that within 30 years the traffic speed in London had fallen by 20%. Rising concerns about traffic led to creation of London Congestion Charging Research Program. Regarding to its report, it was firstly proposed to charge £4.00 on vehicles entering central London area (MVA Consultancy, 1995).

The second alternative was known as the ROCOL report which was mainly based on area licensing and parking levy. As opposed to the first solution, ROCOL proposed to allow vehicle drivers to travel in the charging zone as frequent as they want without paying at each entrance. Despite of the theoretical effectiveness of the schemes, both were rejected. As Leape (2006) notes the final and decisive factor in solving the problem was the election of Ken Livingstone to the position of first Mayor of London. After long public discussions Livingstone finally decided to apply area licensing and rejected from parking levies.

London Congestion Charge system was officially implemented on 17th February of 2003, which involved £5.00 toll for vehicle owners to drive in a selected zone starting from 7:00 a.m. to 6:30 p.m. on business days. According to the scheme, some vehicles were free from charges such as motorcycles, buses, licensed taxis, and emergency vehicles. There were specialized places such as retail outlets, local terminals or special internet pages authorized under the payments. Moreover, there are various methods of payment like daily, weekly or monthly licenses that offer some discounts. To provide fair charging there were located video cameras that identify car numbers and send fines in cases of failure to pay. However, the system required adjustments to current conditions. For example, in 2005 the government decided to increase the charging cost up to £8.00, in 2007 there was intention to expand the charging zone which then was rejected due to the public resistance.

As the result of implementation of a new policy there were significant improvements in the traffic flow of London city. First of all, according to the report of Transport for London (2003a), traffic speed in London roads has risen by 17% to the middle of 2003. In addition, the table 1 shows the improvements in each speed interval comparing the year before and after the implementation of the system, specifically, a decrease in time spent in traffic jams by one-third. One negative expectation from the system was that the London city authorities worried that the new policy of managing with congestions will lead to higher level of traffic jams in the areas which were not included for charge. Regarding to the report of Transport for London (2003b, and 2004) these concerns were not materialized: very low level of congestion (2 – 6 %) appeared in the first year, whilst in the next year congestion rate significantly dropped. To sum up, there is evidence that the new policy had valuable effect on improving the traffic flow of London.

Undoubtedly, London Congestion Charge has had own effects on economy of London city. In the Table 2, there are shown the costs and revenues of the system on different aspects of lives for the year 2005. According to this table, the main expenditures were accrued on the scheme’s operation which compose more than a half of total expenses. Costs for the payer’s compliances, improvements on public transports, setting of necessary equipments were nearly the same, each one consisting £20-£30 million. As regarding to the profits of the scheme, main receipts were from charges to motorists and truck drivers which make up £110 and £35 million, respectively. Above that, the wide usage of public transport led to additional profit of £82 million. To conclude, the financial estimates of London Congestion Charge scheme conclude that there was £67 million net profit for London city for the year 2005, which is a huge plus for development of government.

What is more, the new policy of managing traffic congestions has resulted in significant environmental changes of British capital. According to the report of Transport for London (2006), the statistics show that after the implementation of the scheme there were decreases in negative gas emissions such as 6% in NOx, almost 10% drop in PM10 and approximately 1% fall in concentration of NO2 gas. Moreover, the system became the reason in reducing number of cars on the roads, which on its turn has led to the rare appearance of traffic accidents that are detrimental not only for the environment, but also for the economy of the city. Also, decreasing number of vehicles reduced demand for the petrol supply and contributed for the preservation of resources. Evidently, the charging system had mainly a positive impact on the environment of London.

Undoubtedly, the creation of London Congestion Charge System was one of the effective decisions in the policy of the British Government. The scheme had very significant impact on improving the traffic flow, it had positively affected to the economy of the city, and also it had a noticeable contribution to saving the environment and keeping it clean. Also, the system plays important role in London’s experience to manage with traffic congestions. Despite of having some minor defects, it can be clearly seen that the system basically had beneficial effect on many aspects of Londoners’ lives and has become very effective solution for the problem.

Traffic Management and Congestion in London. (2016, Mar 22). Retrieved from https://studymoose.com/traffic-management-and-congestion-in-london-essay 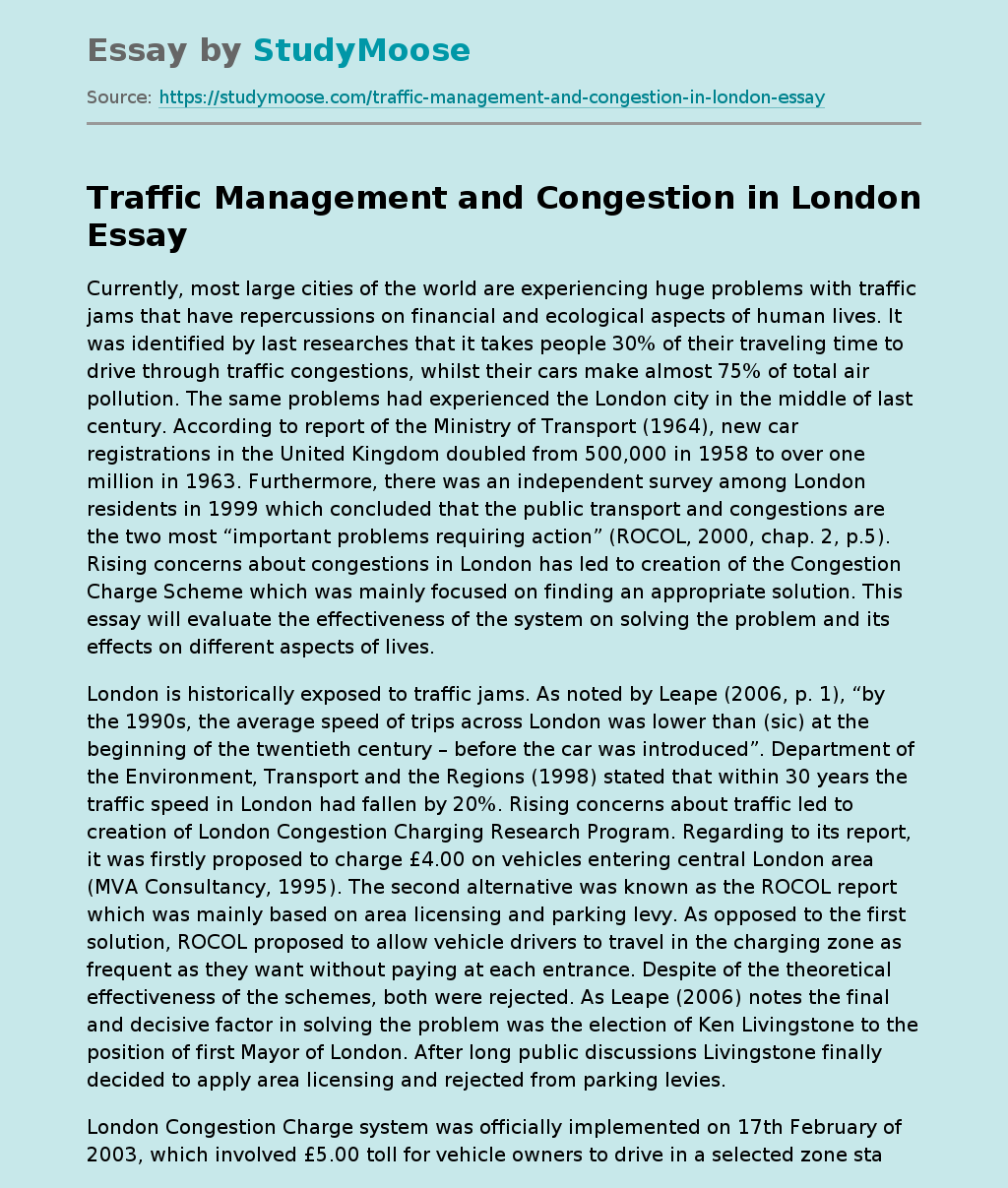