The exploration of the New York Harbor was first done by an Italian-born navigator Giovanni Di Verrazano in the year 1524. In the year 1609, an Englishman Henry Hudson who was employed by the Dutch sailed up the river Hudson named after him when he reached the New York Bay while in the same year, the exploration and claiming of the northern part of the New York was being done by Samuel de Champlain to the benefit of France (infoplease. com, 2007). The New York City has experienced dramatic commercial growth over the course of time and now stands out as one of the most developed cities in the United States.

Don't use plagiarized sources. Get your custom essay on
“ Impacts of Homelessness in New York City ”
Get custom paper
NEW! smart matching with writer

Being the nerve center of the nation, it harbors one of the busiest airports in the world that is John F. Kennedy International Airport in addition to being the home to the New York stock Exchange. It is also the leading city in commerce and banking, theatrical production, foreign trade, manufacturing and publishing of books and magazine (infoplease.

com, 2007). In spite of the fact that the city has developed a reputation of being one of the best cities throughout the United States in terms of urbanization and economy, there is rampant homelessness which has impacted the city in a myriad of dimensions.

The state of urbanization and infrastructure in the city is quite developed with complex air routes and highways such as the popular New York State Thruway. There are also numerous railway systems which facilitate most of the transport activities. The port of New York City handles much of the ocean shipping.

The city has a reputable industrial establishment especially the manufacturing industry. The industry deals with a wide array of manufacturing activities ranging from food products, machinery, chemicals, to electrical and computer equipment.

Other notable industries include mass communications, publishing, entertainment and advertising (infoplease. com, Economy, 2007). The city has seen a rapid transformation in terms of urbanization since the 1980s with new ethnic groups such as Chinese, Latinos, Pakistanis and Russians occupying several boroughs such as Bronx, Brookylyn and Queens which were formely inhabited by Jewish and Irish. Harlem which neigbours Manhattan in the New York City has been upgraded and intergrated racially.

In general, New York City’s small stores, local specializations, a mixture of poor, rich and middle class people is seen to be overtaken and overshadowed by the luxurious and magnificent apartments and chainstores being established. Investment firms have been attracted to purchase many of the existing low-cost apartment houses with the aim of building new and high-cost ones for which the rent has skyrocketed and many older and poorer tenants have been forced out of the houses they previously occupied (Zukin, 2009).

The problem of homelessness in New York City is rampant and has wrecked a lot of havoc in the social aspect of living among the inhabitants. Though it does not have the highest rate of homelessness in the United States, the city has the highest number of homeless people per given metropolitan area in which majority of the homeless are Latino or African-American. There are a number of reasons which has led to this problem and these include political, economical and social factors.

The major cause which triggered a rise in cases of homelessness in the 1980s was the economic downturn (Levinson, 2004). The other cause was wages and public benefits which have hardly kept in pace with the escalating cost of housing thus frustrating the purchasing power of many poor people in the city. In addition, alterations in the Federal legislation introduced certain policies which have rendered many people ineligible for Social Security disability payments, food stamps and welfare payments.

Availability of low-lost housing have also reduced following changes in the city policies in addition to arson and abandonment which have made the city lto be dominated by landlords who charge exorbitant rental rates to the few tenants who can afford it. The scarcity of affordable housing facilities in the city has been worsened by the stoppage of housing projects which were being funded by the Federal governmment to build low-cost houses as a result of unsustainable policies on development.

There are many people in the 1960s and 1970s who were victims of HIV/AIDS and others who previously were accomodated in the phychiatric facilities and who were victims of a failed strategy to support them through community based facilities (Levinson, 2004). A significant number of these at one time or another found themselves without employmment or support from family members and therefore could no longer have the ability to sustain their housing resulting in homelessness. Homelessness poses a health impact especially on children and pregnant women.

Many homeless children have a high probability of having delayed immunizations against different diseases while others may miss them all together. Bellevue Hospital in New York City had earlier produced data which indicated immunization delays in about 50% of children living in welfare hotels. In addition, the mortality rate among infants living in welfare hotels as a result of homelessness was found to be 24. 9 per every 1,000 live births in New York City in 1985 which was two times the rate in the whole city (Hunter & Nursing Center for the Homeless, 1993).

Moreover, pregnant women who were homeless and living in welfare hotels as well as those who were living in city projects in the same time period exhibited a double likelihood of giving birth to low-weight infants as compared to those who had homes. Homeless families face a higher risk of HIV/AIDS prevalence according to anecdotal reports in New York City. The case is the same when it comes to tuberculosis infection and other chronic illnesses. Homeless mothers are the most vulnerable due to poverty that makes them unable to access medical intervention at the right time thereby giving room for the rapid spread of such diseases.

Being housed in welfare hotels do not solve the health challenges faced by these mothers since they have to cope with multiple chronic stressors, inadequate diet and bathing facilities which are substandard. As a result of multiple stressors, these mothers become susceptible to mental health complications which only make them weaker considering that they are not given a foundation for overcoming poverty which may make them suffer various mental problems such as depression and anxiety. Homelessness in New York City in different social aspects has tarnished the image of the city especially from the 1980s onwards.

Homeless youths have been involved in different violent crimes fueled by drug trafficking activities over the course of time raising security concerns among the authorities and the inhabitants. For instance in the summer of 1990, the senseless murders which took place in the borough of Manhattan raised cold chills among many following headlines that gangs were out to make the place a killing ground (McLaughlin, 2007). Homelessness in New York City have caused untold frustrations among many of the affected who have turned to drug abuse resulting in addiction and more hopelessness while others have succumbed to psychological illnesses.

The city had been trying to reduce the high number of beggars who have occasionally flooded the streets begging for assistance and making the city look increasingly disorderly. This tarnished image as a result of the cumulative impacts of homelessness has not augured well with many potential investors, business people and tourists who have retreated to other cities. This have had negative impacts on the economy of the city since most of the resources and employment opportunities have gone to other cities which have better housing policies and thus better social organization and security.

The New York City have experienced periods of accelerated urbanization and spurring economic development on one hand and increasing cases of homelessness on the other due to poor housing policies and a history of failed government projects to build affordable housing facilities. The negative impacts of homelessness have in many instances overshadowed the blossoming urbanization and compromised the security of the inhabitants. The most affected are mothers and children who are vulnerable to both mind and body maladies and therefore there is urgent need to address housing problem in the city. 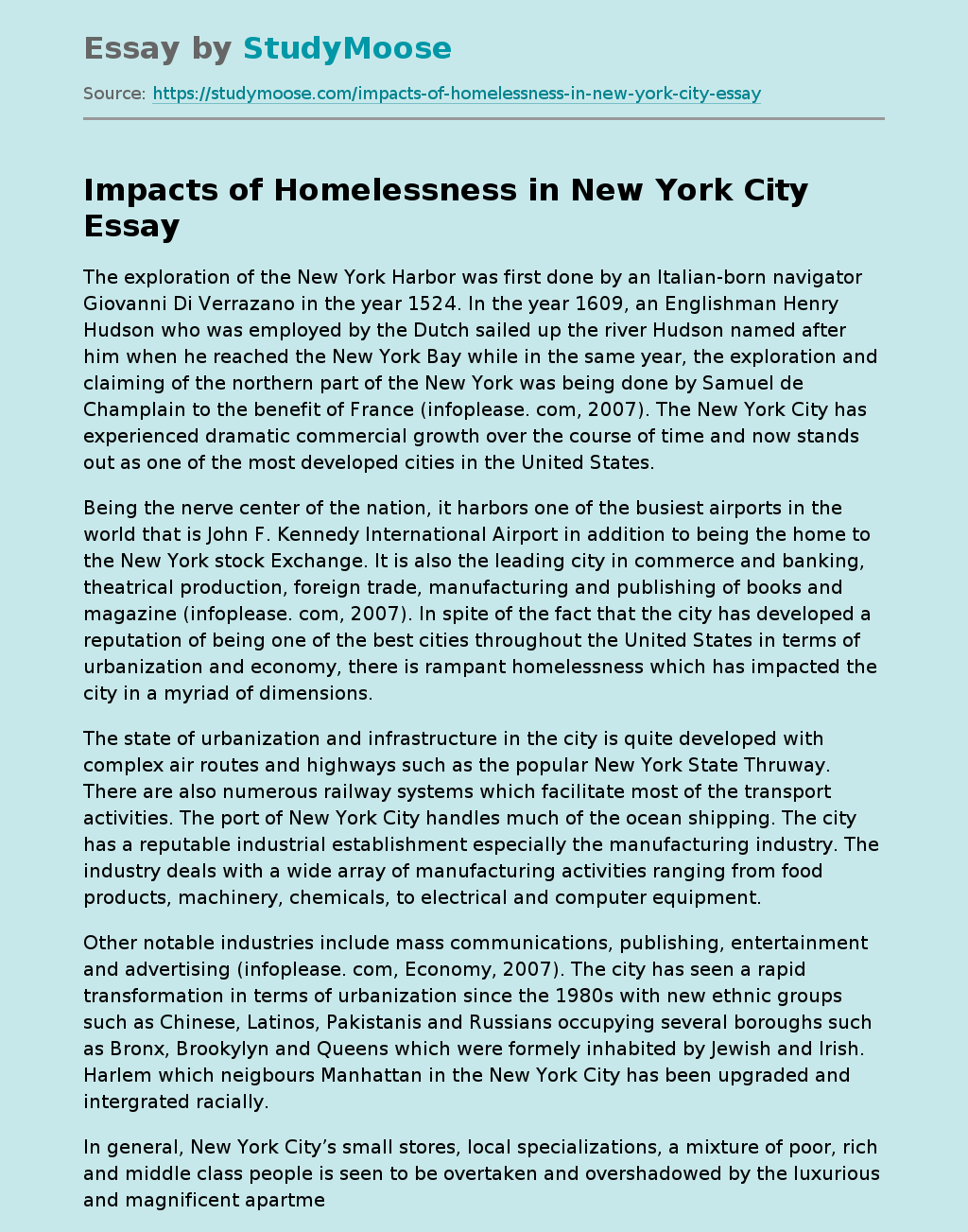