Science Denialism and Its Effect on Public Health

Science Denialism and Its Effect on Public Health

In this day and age, information spreads like wildfire from point A to point B. With all the social media, opinions and ideas have no limit of reach. This is the same for research, especially the kind meant to inform the public of issues seen around the globe. Scientists and doctors use the internet to expand their knowledge and educate people on how to stay “healthy”.

Don't use plagiarized sources. Get your custom essay on
“ Science Denialism and Its Effect on Public Health ”
Get custom paper
NEW! smart matching with writer

However some people deny the research and evidence put out there to protect them. Whether it be from fear, or being “raised that way”, science denialism is a real thing and can be detrimental. Denying evidence put in place to ensure public health is dangerous and can be in the form of negligence towards specific needs, ignorance of evidence, along with poor self-care due to insufficient knowledge of the truth.

There are regulations and programs today that are put in place which should not be neglected.

Their purpose is to provide businesses with the information needed to keep their customers safe and healthy. This is important for restaurants and other places serving food, but it is also very important for businesses in buildings built before 1978. In 1978, lead based paint was banned from usage in homes and other buildings, which was the cause for many children under the age of six to attract lead poisoning (“CDC – Lead”). On November 18, 2018 The New York Times published an article titled “Tests Showed Children Were Exposed to Lead.

The Official Response: Challenge The Tests.” The article, written by J. David Goodman, Al Baker and James Glanz, shed some light on a recent discovery that a certain housing unit in New York had been neglecting the importance of removing access to the lead that was being exposed to children, and had been for close to eight years (Goodman et al.). According to the New York Times; “The Health Department ordered the Housing Authority to fix the problems· Rather than remove or cover the lead, the Housing Authority dispatched its own inspector who used a different test, documents show. The agency insisted that however Mikaila was poisoned, there was no lead in her apartments,” (Goodman et al.). The first step to solving the problem is acknowledging it; however the housing company denied that the lead was in fact causing harm towards a person.

The authorities in charge at the housing company could have felt the need to neglect the threat because of a possible bad image it would put on their business, or the consequence of a poor budget. Either way, the negative effects that lead can have on children should outweigh any reason to not fix the threat. According to the article; “Lead paint – which becomes dangerous when it peels into flakes or is ground into dust that people can ingest – was once a pernicious threat in homes, schools and factories all over the country. The substance affects children differently but can stunt growth and cause permanent cognitive and behavioral problems in developing brains,” (Goodman et al.). The damage to the child’s health is of far greater importance than that of their image.

Although there are people whose views can be altered through proof of evidence, some people’s’ ignorance can be stronger. Eric T. Rosenthal, the special correspondent at MedPage Today, wrote about ignorance of evidence towards cancer treatments in his article titled “ASCO Poll Finds ‘Frightening’ Views on Alternative Cancer Tx”. In one section, he writes; “Schilsky cited a 2017 study that showed mortality was 2.5 times higher among patients with common cancers who chose only alternative medicine instead of standard cancer treatments such as surgery, radiation, chemotherapy, immunotherapy, and hormone-based therapies,” (Rosenthal et al.). Even though it was proven that the alternative cancer treatments are not as secure and trustworthy performed alone rather than paired with a traditional form of treatment or not done at all, people will still “take the risk” or they do not even acknowledge the risk. While some people recognize the evidence of higher mortality rates, Martin McKee and Pascal Diethelm from the London School of Hygiene and Tropical Medicine believe that some will not be so easy to persuade.

In their article “How the Growth of Denialism Undermines Public Health” they wrote: “· Early programmes to tackle HIV/AIDS in east Africa had to address concerns that promotion of condoms was a covert attempt to control the population. It may be necessary to accept that there are some people who cannot be convinced, but there will be many who can, “(McKee and Diethelm). They are saying that even though the programs were made to teach people ways to prevent STDs (Sexually Transmitted Diseases), what few people took from it was that the purpose was to shrink the population. This form of ignorance is the same found in the people who found it more trustworthy to use alternative treatments for cancer even though the evidence proves otherwise.

Aside from complete negligence and ignorance, denying science can simply come down to poor self-care due to insufficient knowledge of possible harm. Milenko Martinovich, from the Stanford Graduate School of Business, wrote about science denialism in relation to smoking in his article titled; “Why Aren’t More Americans Ditching Their Cigarettes?” According to Martinovich: “… Most Americans overestimate the difference between the two rates of lung cancer – suggesting that people overestimate the risk of smoking – but the vast majority underestimate the relative risk. In essence, they are underestimating how much more likely it is for a smoker to develop lung cancer than a non-smoker,” (Martinovich). This shows us that yes, at least most people know of the risk of lung cancer due to smoking, but they do not know how great of a risk it is compared to that of non-smokers. As a result of lacking the proper understanding of the risk, people fail to accurately care for themselves by continuing to poison their bodies with cigarettes.

With that being said, more can be done to provide people with the correct understanding. For instance, more specific warnings on labels of cigarette boxes could do more good than bad (Martinovich). Martinovich also described the United States’ cigarette packages to be not as direct with its warning labels while “cigarette labels in Australia include quantitative data such as, ‘Tobacco smoking causes more than four times the number of deaths caused by car accidents'” (Martinovich). There is a notable difference in the labeling on cigarettes in Australia than the ones in America which can change how people view the risks of smoking and what their reaction to it could be.

While neglecting specific needs, ignoring proven evidence, and simply not knowing the difference can all be separate versions of science denialism, they could happen all at once on a larger scale. Laurie Garrett, the author of “Betrayal of Trust: The Collapse of Global Public Health,” wrote about the pneumonic plague that came to India in 1994. In the first chapter of her book, she quoted an editorial from India Today, which read; “‘it’s as if a medieval curse is upon us. But the hex is self-inflicted. We are our own worst murderers. We are the practitioners of filth. The emperors of garbage,’…” (18). On the same page, Garrett wrote that “The plague in Surat had much more to do with horrid housing, human panic, and bereft health care than Ratus ratus,” (18).

All things considered, the plague was the result of a combination of failure to secure regulations and needs for sanitation, poor self-care from the citizens of India, and failure to keep any permanent programs that identify possible cases of epidemics (Garrett 19). Even though the threat of an outbreak had been made apparent in the past, there had been no signs of any cases in the prior years to the epidemic, and therefore the government began closing their “plague stations” (Garrett 19). If the plague stations had not been neglected, and if the chance of another outbreak had not been ignored, could the spread of disease have been avoided? If people accepted the research that proved alternative cancer treatments are not as trustworthy, or that cigarettes increase the risk of attaining lung cancer, could lives be saved? Science denialism is very dangerous and should be taken very seriously. The next time someone neglects to take care of themselves or ignores what their doctor tells them, it could cost them their life.

Science Denialism and Its Effect on Public Health. (2019, Dec 17). Retrieved from https://studymoose.com/junior-project-paper-2-anna-clymer-1-example-essay 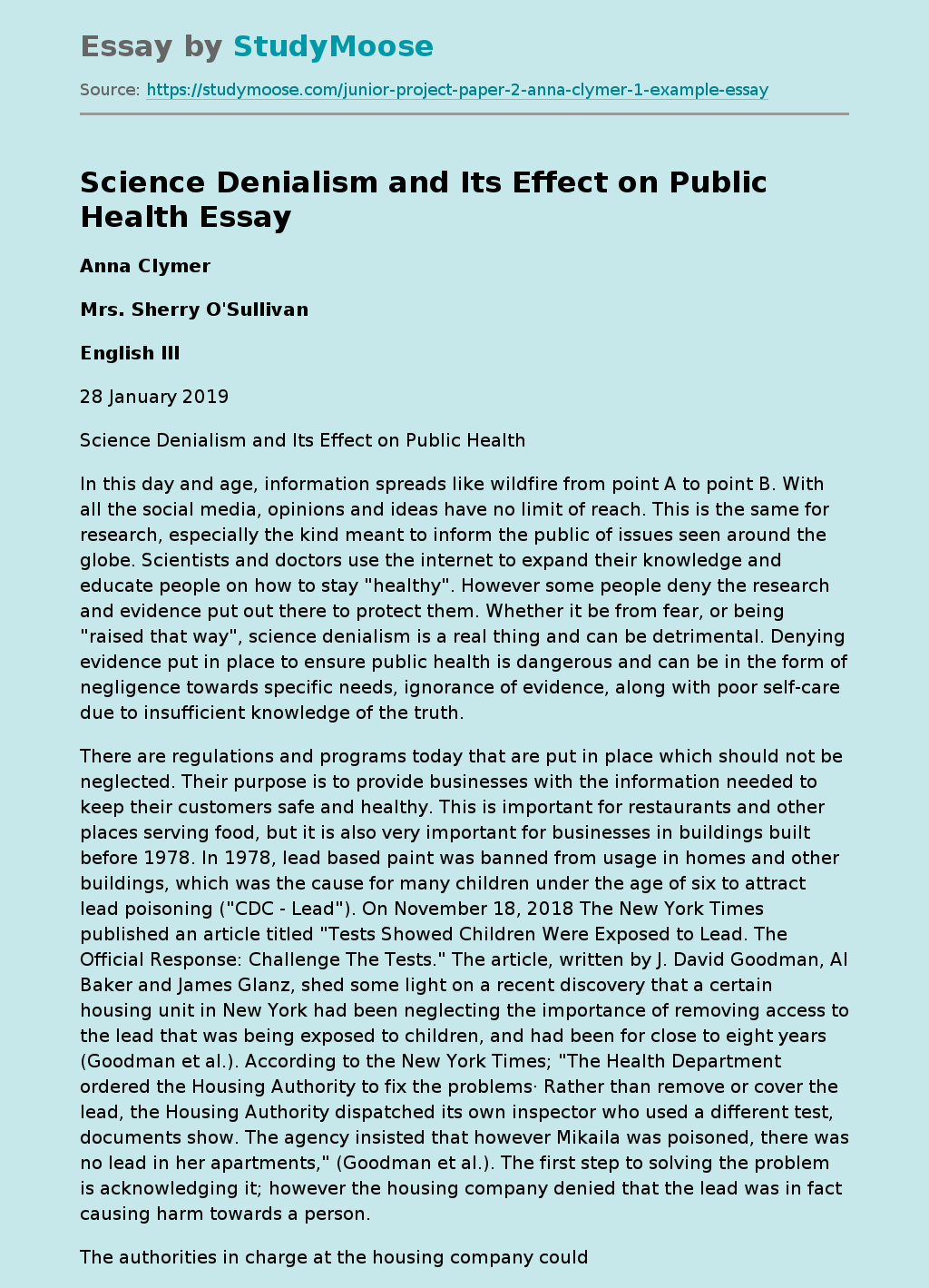