Jollibee’s Success in the Philippines

Tony Tan Caktiong’s Jollibee has been one of the most admired, most copied, most innovative and most professionally-run company here in the Philippines. It has been the number one fastfood chain overtaking giants such as Mc Donalds and Kentucky Fried Chicken or KFC. How did a local jolly red bee knocked down a multinational red-haired clown named Ronald? Let’s see another inspiring story of the founder of one of my ideal businesses. With its success, a Jollibee franchise has now a tag price of P25+ Million (US$ 500,000+).

Don't use plagiarized sources. Get your custom essay on
“ Jollibee’s Success in the Philippines ”
Get custom paper
NEW! smart matching with writer

Tony Tan Caktiong’s Life and his Jollibee company is another rags to riches story of an entrepreneur that truly inspires everyone. Tony was the third of seven siblings born to poor parents who migrated from the Fujian province in China to look for a better life here in the Philippines. Tony to return back to Manila and pursue his course Chemical Engineering at the University of Santo Tomas (UST).

In 1975, Tony and his colleagues went on a visit to a Magnolia Ice Cream plant located in Quezon City and learned that it was offering franchise when he saw a poster for it. By the month of May, with his family savings, he took P350,000 to grab the franchise opportunity and opened two Magnolia ice cream parlors named Cubao Ice Cream House. They all worked hands-on but as the business propels, they noticed they could not do it all so they started to set up an organization hired store managers, and trained people.

Tony started with just two ice cream. Then after two years, he offered chicken and hamburger sandwiches, because customers were telling them they didn’t want to be eating ice cream all the time. They prepared the food in the back kitchen, and soon noticed that people were lining up more for hamburgers than for ice cream. Then in 1978, when they already had six ice cream parlors, they asked themselves: “Why don’t we change into a hamburger house?”

That was also the time they decided to incorporate and realized they needed a brand name. They were looking for a symbol that would represent the group, and because Tony was very impressed with Disneyland characters, they decided on a bee. The bee is a busy creature that produces honey – one of life’s sweetest things. They thought it would be a very good symbol to represent everybody. They decided they would all be very busy and happy at the same time, because if they were busy but not happy, it would not be worth it. That’s why they put the word jolly and just changed the “y” into “i” to form a brand name – JOLLIBEE.

“It wasn’t long before we heard that the multinationals were coming in – including McDonald’s. Friends started asking us if we were going to get a McDonald’s franchise but I remember saying, if you franchise, you can’t grow outside the Philippines”, says Tony.

Like many asians, Filipino people eat their meals with rice and they prefer it home-cooked. However, due to the urbanization of the capital city in the late 70’s and the modernization required for economic development, Filipinos had to settle for less than the best: the turo-turo style. Way before the term “fastfood” reached the vocabulary of the Filipinos, people in the Philippines had eaten turo-turo style. Turo-turo is where ready-to-eat and ready-to-go entrees arrayed in steam-heated trays, are always ready to be eye-balled by hungry and harried customers.

If you wait more than 20 minutes to get your food, it’s not considered as a turo-turo restaurant. Jollibee’s claim to have revolutionized the concept of fast food in the Philippines is probably correct. The company claims that the secrets of its success are “superior menu line-up, creative marketing programs, and efficient manufacturing and logistics facilities. It (success) is made possible by well-trained teams that work in a culture of integrity and humility, fun and family-like. ” Success did not come easy as Jollibee is not exactly the first “fastfood” in the Philippines.

Wendy’s from the USA came first and that is where Jollibee “ conceived” the idea of sandwhiches and hotmeals served in less than twenty minutes to cater to the urbanized city of Manila. Competition has been tough for the first few years however Jollibee made the right decision to “Philippinize” its concept starting with market research. It was hypothesized that the Filipinos love not actually the home-cooked meals served by their wives but the smell and aroma of the meals served at home. Capitalizing on this theory, Jollibee launched the slogan, “langhap-sarap” which in English translates to “smells delicious”.

Also, knowing the heart and soul of every Filipino is the family, Jollibee made itself cater not to individual professionals in the modern city but to the family as a whole. Jollibee became a red, giant bee mascot children adore. Jollibee easily became a household name in the market. The most notable commodity Jollibee offered is the chicken joy. When you step inside a single branch of Jollibee, you can actually smell the crispy, golden chicken being deep fried to juicy tenderness. In Jollibee, hamburger patty is being eaten with gravy and served with rice and they call it the burger steak.

Same as any product, this one “smells delicious”. Another notable thing about Jollibee is how spaghetti is flavored. The spaghetti of Jollibee is sweet as Filipinos put sugar in their spaghetti and not much tomatoes. This menu line-up thanks to research on the wants of Filipinos, target customer and the use of mega-superstars as endorsers put Jollibee at the top of the fastfood industry in the Philippines. Jollibee in the USA The Jollibee branch located in San Francisco area is supposed to cater to the voluminous home-sick Filipinos working in the city.

The burger steak is still served with rice though the hamburger patty is bigger and spaghetti is not as sweet as it should be, Filipino-style. The fusion of two states could be blamed for the high pricing as Jollibee might be adjusting to the cost of putting up a branch in San Francisco where raw materials are considerably more expensive. However, the objective of catering to home-sicked Filipinos is not met, in my opinion, as this Jollibee, though the same as in the home country in name, is not the same in every other aspect.

Jollibee’s Success in the Philippines. (2017, Jan 08). Retrieved from https://studymoose.com/jollibees-success-in-the-philippines-essay 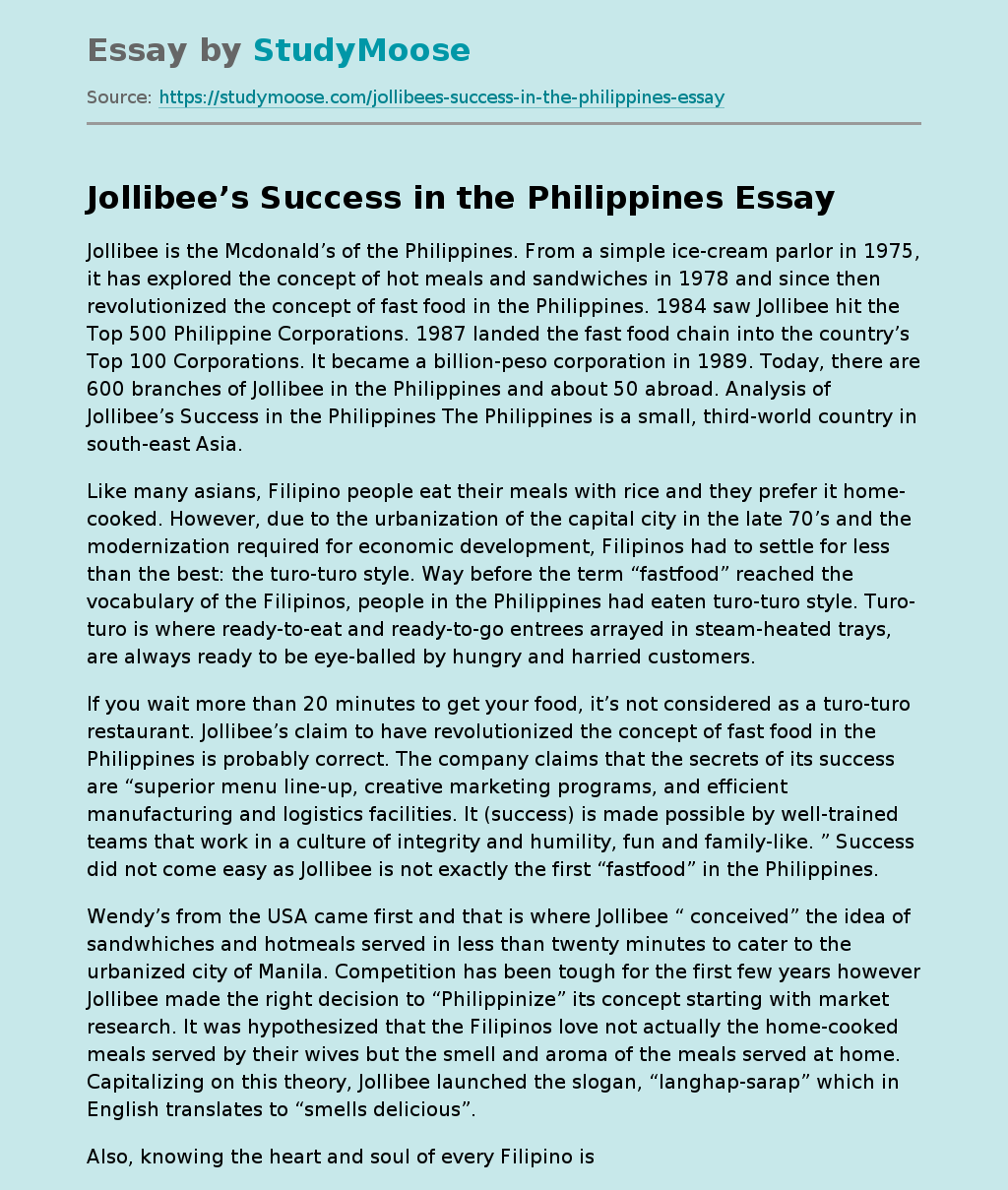