Jollibee is a phenomenal success story: when beganTony Tan Caktiong and his family opened a Magnolia Ice Cream parlor from Bankerohan, Davao City to Cubao in 1975 with Jolibee as the original name. Sometime in 1978, Caktiong and his brothers and sisters engaged the services of a management consultant, Manuel C. Lumba. Lumba shifted the business focus from ice cream to hamburgers, after his studies showed that a much larger market was waiting to be exploited. Lumba became Caktiong’s first business and management mentor.

Don't use plagiarized sources.
Get Your Custom Essay on History of Jollibee Foods Corporation Just from $13,9/Page

Lumba next re-formed the name Jolibe to Jolly Bee and made the two words form a single name, Jollibee, changing the “y” to an “i”. They also offering hot meals and sandwiches became incorporated in 1978 with seven outlets to explore the possibilities of a hamburger concept.

Thus was born the company that revolutionized fast food in the Philippines. The Jollibee mascot was inspired by local and foreign children’s books. Lumba next created the product names “Yumburger” and “Chickenjoy”.

He had the company incorporated and leased a house on Main St. in Cubao, Quezon City as the first headquarters. Lumba formulated a long-term marketing strategy: listing up a number of consumer promotions and traffic building schemes. Caktiong stressed that developing internal strengths was critical. The stores were re-designed, the service transformed into a full self-service, fast-food operation with drive-through. Not long after, Caktiong and Lumba went on an observation tour in the United States, attended food service and equipment conventions.

In 1984, Jollibee hit the P500 million sales mark, landing in the Top 500 Philippine Corporations. In 1987, barely 10 years in the business, Jollibee landed into the country’s Top 100 Corporations. It became the first Philippine fast food chain to break the P1 billion sales mark in 1989. In 1993, Jollibee became the first food service company to be listed in the Philippine Stock Exchange; thus broadening its capitalization and laying the groundwork fo r sustained expansion locally and beyond the Philippines. As the country’s leading fast food chain, Jollibee has grown exponentially on all aspects on operation. From a handful of stores 32 years ago, Jollibee now boasts of more than 600 stores and over 50 international stores. To achieve its long-term goal to be the country’s food service leader, Jollibee acquired Greenwich Pizza in 1994. A year later, the company obtained the franchise of Delifrance, an international food company.

These moves expanded Jollibee’s penetration in the pizza-pasta and French café-bakery segments. In 2000, the strategic acquisition of Chowking solidified the company’s position as the dominant leader. The move gave it leadership in the Oriental quick-service restaurant segment. Jollibee’s rapid growth is due to its superior menu line-up, creative marketing programs, and efficient manufacturing and logistics facilities. It is made possible by well-trained teams that work in a culture of integrity and humility, fun and family-like. As a corporate citizen, Jollibee is also committed to give back to its host communities through meaningful and lasting socio-civic projects. Jollibee dedicated its continuous success to the Filipinos who have been there from the very start. Jollibee is so well-loved every time a new store opens, especially overseas, Filipinos always form long lines to the store. It is more than home for them. It is a stronghold of heritage and monument of Filipino victory.

* Jollibee stages first ever holiday musical special for children dubbed “A Magical Christmas at Jollitown” * Jollibee and the Jollibee Franchisees Association launched the 30th anniversary special novelty offering – Hug and Share Doll. Proceeds of the sales will all be donated to charity. * Biggest and grandest MaAga ang Pasko caps off Jollibee’s 30th anniversary. Total of more than 117,000 toys and books collected were the highest ever in the campaign’s 14-year history.

Fred David, in his book Strategic management; Concept and Cases enumerated key factors in making a mission statement. He recognized that a mission statement goes beyond being a statement, for it is a declaration of the company’s attitude and outlook. The mission statement of Jollibee Foods Corporation (JFC), although it meets the primary objective of a fast food chain, is too concise and gives sole emphasis to its current services. Thus, the space for improvement was narrowed down to simply food catering to the target market, taking for granted the other aspects of the business.

According to David, a mission statement should be able to “allow for the generation and consideration of a range of feasible alternative objectives and strategies, because excessive specifity would limit the potential of creative growth for the organization. Also, a mission statement has to be broad to reconcile differences effectively among, and appeal to, an organization’s diverse stakeholders, the individuals and groups of individuals who have a special stake or claim on the company.” 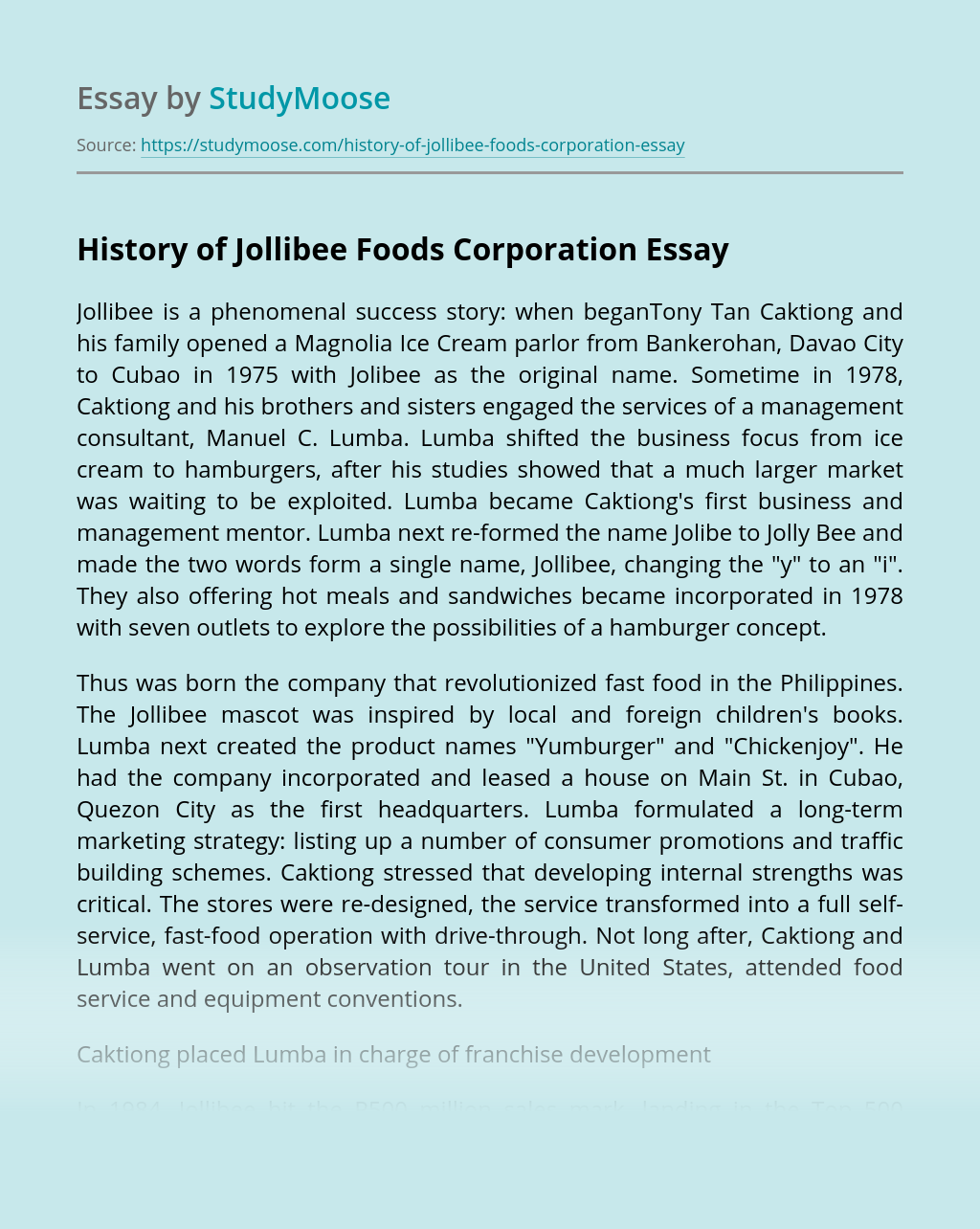 There are three different forms of business ownership, the Sole Proprietorship, the Partnership, and the Corporation. Each of these businesses have major advantages and disadvantages. The sole proprietorship is a business which is owned and managed by one individual. Some of its advantages are, the ease of formation, its management control, and its distribution of... VIEW ESSAY

The Organization that we selected as our topic of discussion in our Project Paper is the Wal-Mart Corporation. Sam Walton is the founder of Wal-Mart. He opened his first store called Wal-Mart Discount City in Rogers, Arkansas in July of 1962. Their corporate office is currently located in Bentonville, Arkansas. Wal-Mart Stores Inc. incorporated its... VIEW ESSAY

ASC 830-230-55-1: This reference shows how to format and account for cash flows when a company has subsidiaries operating in foreign countries. It gives an example of a consolidated cash flow statement from a US based company and its two subsidiary companies. The reference explains how excess cash should be disclosed. A majority of the... VIEW ESSAY

Diversification is even more prominent in other parts of the world • Grupos, chaebol, business houses, keiretsu, and so on – Poor corporate strategy is common “Excite, one of the leading Internet services companies, yesterday [received a] takeover offer from Zapata, a Texas-based group with holdings in marine protein and food packaging companies. Citing the... VIEW ESSAY