John Rawls was a leader in moral and political philosophy, a political theorist who argues against utilitarianism and communism. Rawls works with the social contract theory of Hobbes, Locke, Rousseau and Kant and argues that the moral and political point of view is discovered via impartiality. Rawls explores this viewpoint by envisioning persons in a hypothetical situation, the ‘original position’.

The original position is the fundamental element within John Rawls account of justice – ‘Justice as fairness”, and can be comparable to the state of nature in the social contract theory (Rawls, 1971).

Don't use plagiarized sources. Get your custom essay on
“ John Rawls’ Philosophical Concept of Veil of Ignorance ”
Get custom paper
NEW! smart matching with writer

Of course for Rawls, this state of nature, is only a hypothetical place, as it is present only in the mind of the theorist and is characterized so as to lead to a particular abstraction of justice (Rawls, 1971). The ‘veil of ignorance’ is the predominant distinguishing feature in the hypothetical situation, which certifies impartiality of judgment and allows one to discover the nature of justice (STANFORD).

John Rawls in Justice as fairness and Robert Nozick in Anarchy, State and Utopia present clear, subtly argued and contradictory conceptions of justice. The central claim for my argument is in favour of the Veil of ignorance in identifying principles of a just society. Therefore, my first premise is in support of John Rawls princples of justice, namely the difference principle, his justice as fairness theory. In response, an objection from Nozick contained within his concept of justice of entitlement, contrasts sharply with Rawls principles of justice.

“The hypothetical contractualist model, then, regards moral principles as the result of a bargaining process among a group of agents, subject to certain restrictions that are specified so as to guarantee that the chosen principles will meet the demands of second-order impartiality” (STANFORD).

John Rawls, veil of ignorance theory is one of the most famous examples of this approach.

Rawls describes the original position, as a position whereby the principles of a just society are chosen by self interested, rational agents (STANFORD) In this position, behind this veil, an individual is denied the knowledge of ones circumstances, such as their social status, gender, race or disabilities and therefore everyone is presumed to be equally rational since no body knows what social position they will occupy (Velasquez, 2008).

Consequently, these conditions allow individuals to adopt the same method for choosing the basic principles for a just society, ensuring that no individual is disadvantaged by the contingency of social circumstances and subsequently, are able to discover what is required of them as individuals to live together cooperatively, within society (IED).

In Rawls scheme, the contractors in the original position settle on principles that gaurentees as much liberty as achievable. He believes that such principles would recognize all persons as equal and thus reflect the demands of moral impartiality (STANFORD). Ultimately, Rawls advocates that the veil of ignorance sets fair and impartial ground rules through the removal of bias, in order for a just society to be developed.

Argument in favour of Rawls theory of justice

Additionally, I present an argument in favour of Rawls theory of justice and his belief in the difference principle – designed to “incorporate pure procedural justice at the highest level” (STANFORD). The theory includes two fundamental principles of justice, related to each other by a specific order, each of which exert influence on the dispersal of civil liberties and social and economic goods (IEP).

The first, being the equality principle, stating that everyone will have an equal right to the most extensive basic liberties, compatible with similar liberty for others e.g. the right to vote, freedom of speech. The second principle addresses aspects of societies structure that form the distribution of opportunities, wealth and income in order to govern a societies economic constitution (Velasquez, 2008).

It constitutes the principle of equal opportunity, suggesting that desirable jobs should be open to any individual who is qualified by their skills. Additionally, the difference principle, focusing on income and wealth, states that social and economic inequalities must be to the advantage of everyone and as a result the inequalities are of greatest benefit to the least advantaged (Velasquez, 2008). In today’s society, the governing economic view is that wealth is most readily increased in systems where those who are more productive earn greater incomes (IEP).

This notion is in favour of Rawls argument who, believes that without inequalities in the economic arena, there would be little incentive for greater productivity. Therefore, society will be greatly benefited by those who work harder with superior abilities, to be given grander economic rewards leading to an increase in productivity. Additionally, Rawls believes his argument is fair to all of society as it is based on reciprocity whereby the disadvantaged are ‘repayed’ by the advantaged, for the inequalities from which they benefit.

Therefore, alleviating the plight of the disadvantaged (Velasquez, 2008). In conclusion, the method of the original position is in support of Rawls difference principle as, “when we are behind the veil or ignorance and are unaware of our place in society, we will only accept principles that will be to our advantage even if we end up in the least advantaged position in society”(IEP).

Therefore, the presence of the veil of ignorance is necessary in order to maintain impartiality within society and provides evidence as to why the difference principle is an appropriate principle of justice to support a just society. Although Rawls non-historical principles embody ideals of fairness, criticism can stem from the presence of inequalities in the system leading to instability within society. Robert Nozick advocates a libertarianism view on justice and critiques Rawls difference principle. Novick believes that the less advantaged ones should not automatically be entitled to a share in the earnings of their more successful peers simply because all societies members must benefit from social cooperation.

Nozick points out that in economic affairs, Rawls supports a ‘patterned’ theory of justice, whereby the goods in society are distributed according to some specific property, formula or pattern (Velasquez, 2008). So, in Rawls theory, these goods are distributed according to whatever maximizes the status of the least advantaged. If not, then goods must be redistributed between citizens until required distribution is achieved. Nozick strongly objects this patterned concept of justice, and believes that any patterned theory will lead to the use of coercion and force.

He maintains that any pattern society attempts to establish will be altered as a result of people’s free choices (Velasquez, 2008). In turn, unjust force will result to again achieve the required distribution. In place of Rawls difference principle; Nozick argues in belief of his non-patterned entitlement theory of justice and proposes that the acquisition and transfer of goods is always just, so long as we do so freely not resulting in any particular identifiable pattern or distribution.

Thus, Nozick argues against Rawls suggesting his principles are fundamentally unjust as it uses the better off people in society as a method to guarantee the welfare of the worst off and that unjustly taking someone’s holdings violates their rights. In defense of Nozicks argument, Rawls claims that Nozick has misunderstood the nature of principle in producing a Just society. Rawls replies to Nozicks argument by outlining that his principles, including the difference principle, are not in-fact patterned theories that apply to the individual choices that Nozick talks about. Rather, a set of overarching principles that, apply to the broad laws and institutions of society (Valasquez, 2008).

In conclusion, arguments about which framework and/or resulting distributions are morally preferable constitute the topic of distributive justice (STANFORD). Regarding justice in a society, both John Rawls and Robert Nozick express opposing beliefs on the best way to achieve this. Rawls explains the value of paying attention to the relative position as a way of appreciating the value of solidarity.

His method fits into a set of views in which being materially equal, or striving towards it, is an important expression of the equality of persons. Rawls social contract account of justice, involving the veil of ignorance allows a fair and impartial judgement that is to be implemented in our reasoning about fundamental principles of justice (STANFORD).

In comparison, Nozick believes equality is not to be attained by ameliorating the position of the least advantaged and therefore rejects Rawlsian principles of Justice. Nozick defends historical principles of justice and rejects end state and patterned principles of justice. He proposes a 3-part entitlement theory simply expressing that justice is respecting people’s free choices.

John Rawls' Philosophical Concept of Veil of Ignorance. (2016, May 17). Retrieved from http://studymoose.com/john-rawls-philosophical-concept-of-veil-of-ignorance-essay 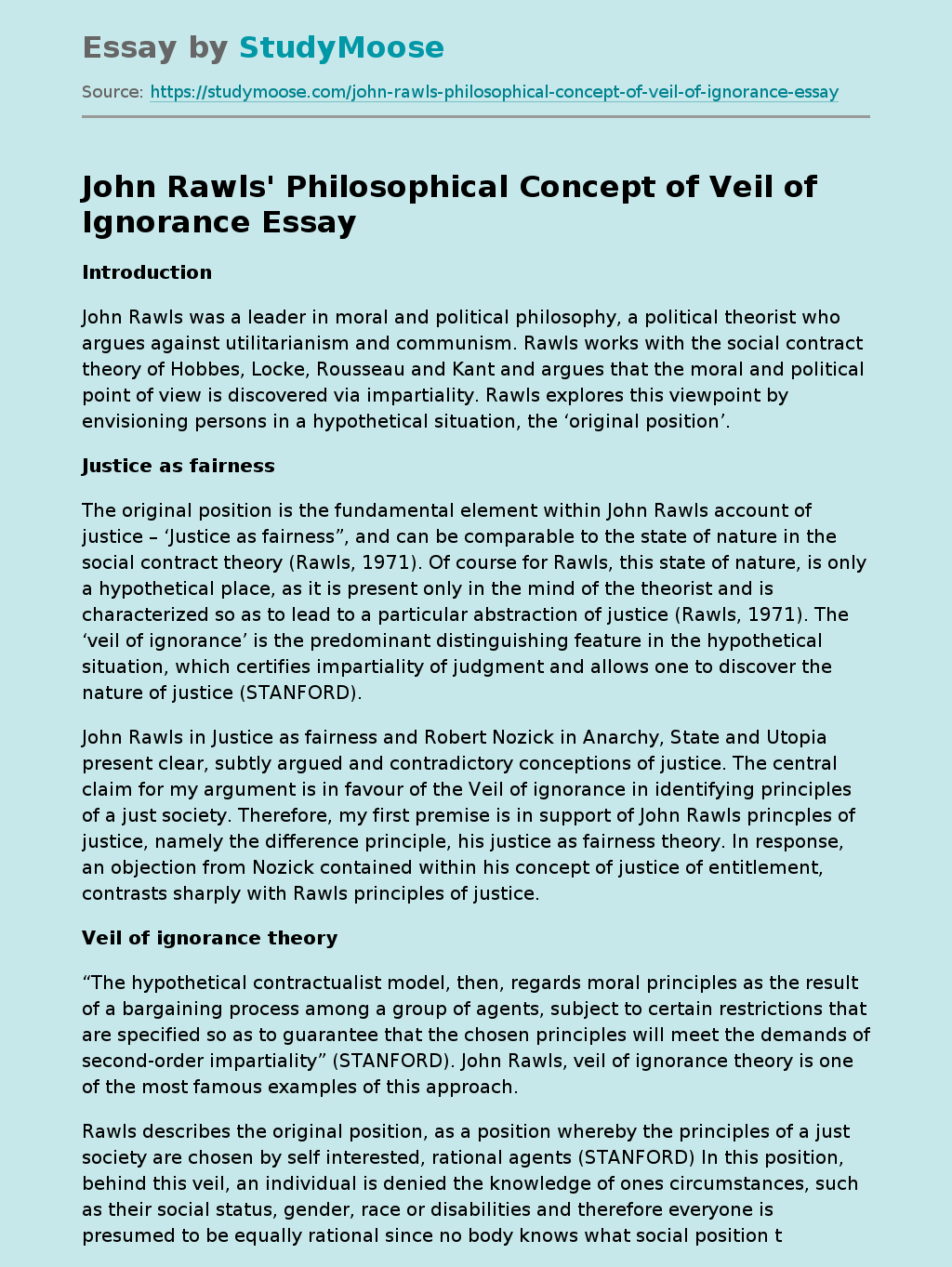