With a powerful and convincing tone, the charismatic world leader, John Fitzgerald Kennedy, confidently proposes to a global audience the agenda of his administration. Kennedy emphasizes that he will promote unity in the United States and around the world; However, Kennedy also affirms that he will not tolerate any adversaries that threaten the U.S. or its allies. Through the use of antithesis and anaphora, President Kennedy effectively conveys this message to the American people and to all the influential leaders of world.

Because of its ability to juxtapose two contrasting ideas and underline their complexities for the audience, a majority of Kennedy’s important, consequential points are made through the use of antithesis. Accoringly, he opens the speech with the line, “…we observe today not a victory of party, but a celebration of freedom”(Kennedy 1). By placing this antithetical remark near the beginning of his speech, Kennedy is able to enthrall his audience before he gets any further. Kennedy is also clarifying that the occasion is a “celebration” of the unity of the country, not a political victory for his party.

In addition, one of Kennedy’s most famous quotes was the antithesis: “Ask not what your country can do for you, ask what you can do for your country”(26). These words captivate the audience and embody Kennedy’s message of unity throughout the whole Inaugural Address. President Kennedy appeals to pathos by patriotically proclaiming these statements to his audience and causing them to emotionally connect with his message of unity.

Similarly, Kennedy’s use of anaphora to helps to focus the audience’s attention on his message of unity. Kennedy first uses anaphora in paragraphs six through eleven. In the first sentence of each of those paragraphs, he repeats the words, “To those…,” followed by words of encouragement to “allies” and “sister republics” ,or words of warning to any “adversary” (Kennedy 6-11). Kennedy uses anaphora here to subtly stress his message of the local and global unity the world is in need of. Another instance where Kennedy employs anaphora is from paragraph fifteen through eighteen; These paragraphs begin with, “Let both sides” and continue on, speaking of “problems that unite” both sides and so forth (Kennedy 15-18).

In these lines, Kennedy’s purpose is to bridge the gap between the United States and its adversaries. He encourages them to work together with the U.S. to achieve common goals they share, instead of fighting with each other over things they differ on. In addition, through his repeated use of third person pronouns, such as “we” and “us,” and the word “unite,” Kennedy is able to exude a synergistic tone and diction. This helps Kennedy’s appeal to ethos by making the audience feel connected to him.

President John F. Kennedy’s inaugural address continues to be a timeless piece of literature that pertains to the world we live in. His ideals of unity and cooperation remain extremely important and would be helpful in our society, especially in regards to the strife and warfare taking place in Syria. 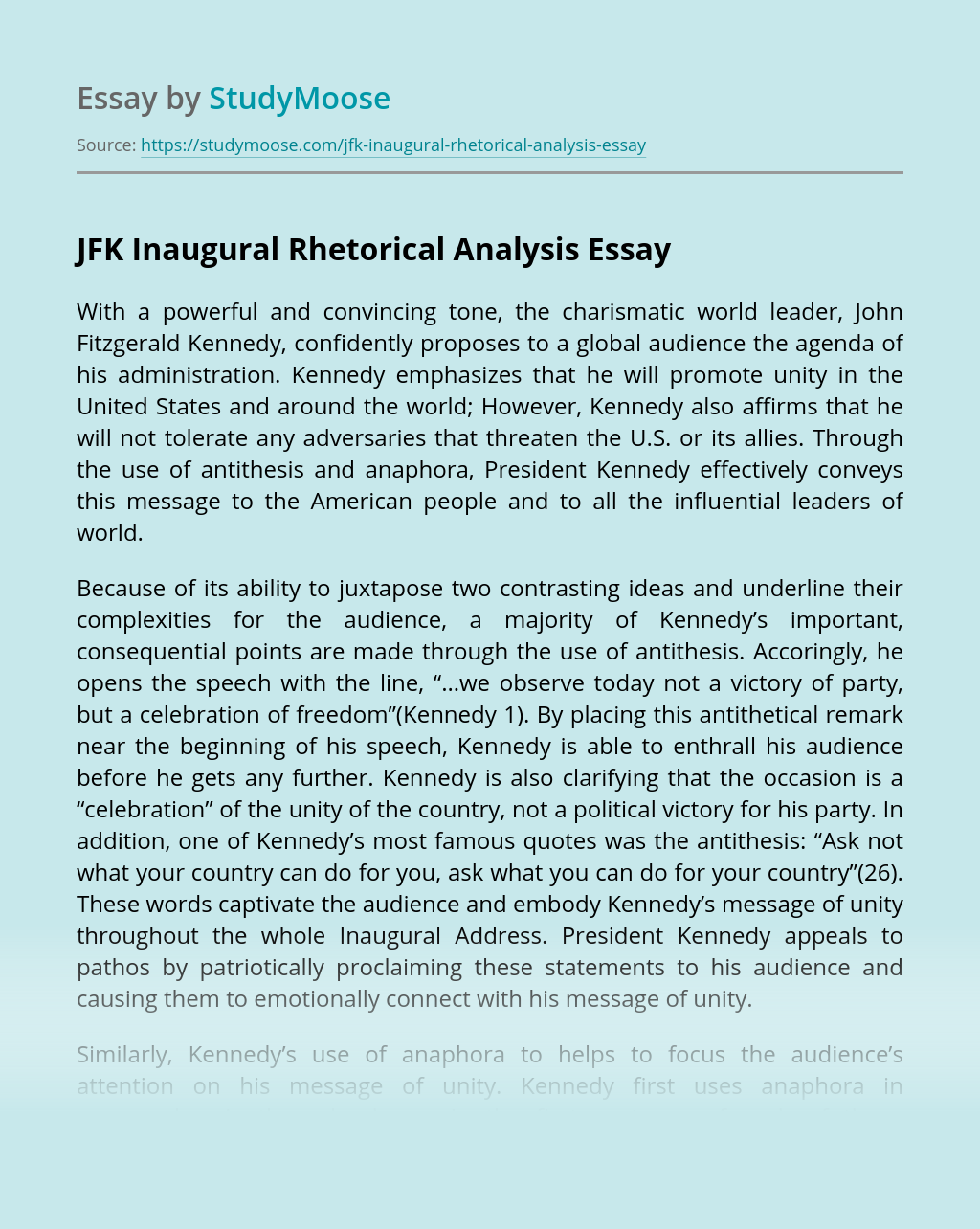