The legendary Track and Field athlete, known to the world as Jesse Owens, was born James Cleveland Owens on September 12, 1913. It’s claimed that the nine-year-old’s accent made it difficult for his schoolteacher in Ohio to understand Owens when he gave his name as “JC. ” Instead the teacher wrote his name down as “Jesse” (Gentry, 1990, p. 34). Jesse’s first brush with running was to be in the hills of Alabama, his home state. At the time though, Jesse was a sickly child given to frequent attacks of Pneumonia and other medical issues including the appearance of boils.

Don't use plagiarized sources. Get your custom essay on
“ Jesse Owens – A Legend ”
Get custom paper
NEW! smart matching with writer

His training for the track and field events only began when he entered Fairmont Junior High School where he was noticed by Charles Riley, an Irishman who was quick to take into account Jesse’s “potential” despite his lack of a strong physique. Riley, took the time to coach Jesse before school began each day so that Jesse would be free after school to do the part time jobs he’d taken up to contribute towards his family’s financial betterment.

There’s nothing to show that Jesse’s typical workouts weren’t anything but pretty basic in terms of the equipment available and the routines followed in those early years.

Practicing the various techniques of starting and running as well as long jump is what Jesse engaged in. Making the most of this humble start, Jesse soon began to draw attention to his abilities, having by this time, enrolled in East Technical High School.

Owens then went on to join the Ohio State University where he continued to break records and draw attention though still failing to get a scholarship on account of his race. Owens greatest contribution to American history came in Berlin where the 1936 Summer Olympics were held.

Jesse Owens went on to win four gold medals for his country – 100m sprint, 200m sprint, 4 x100m relay and long jump – in the face of strong prejudices exhibited by Adolf Hitler who was intent on showing off the superiority of the Aryan race to the world. Americans greeted him with great enthusiasm on his return, and cheered his accomplishments heartily (Corrigan, 1990, p. 18). Track and Field events gained popularity in the United States. However, Jesse himself was not to benefit from all these events. 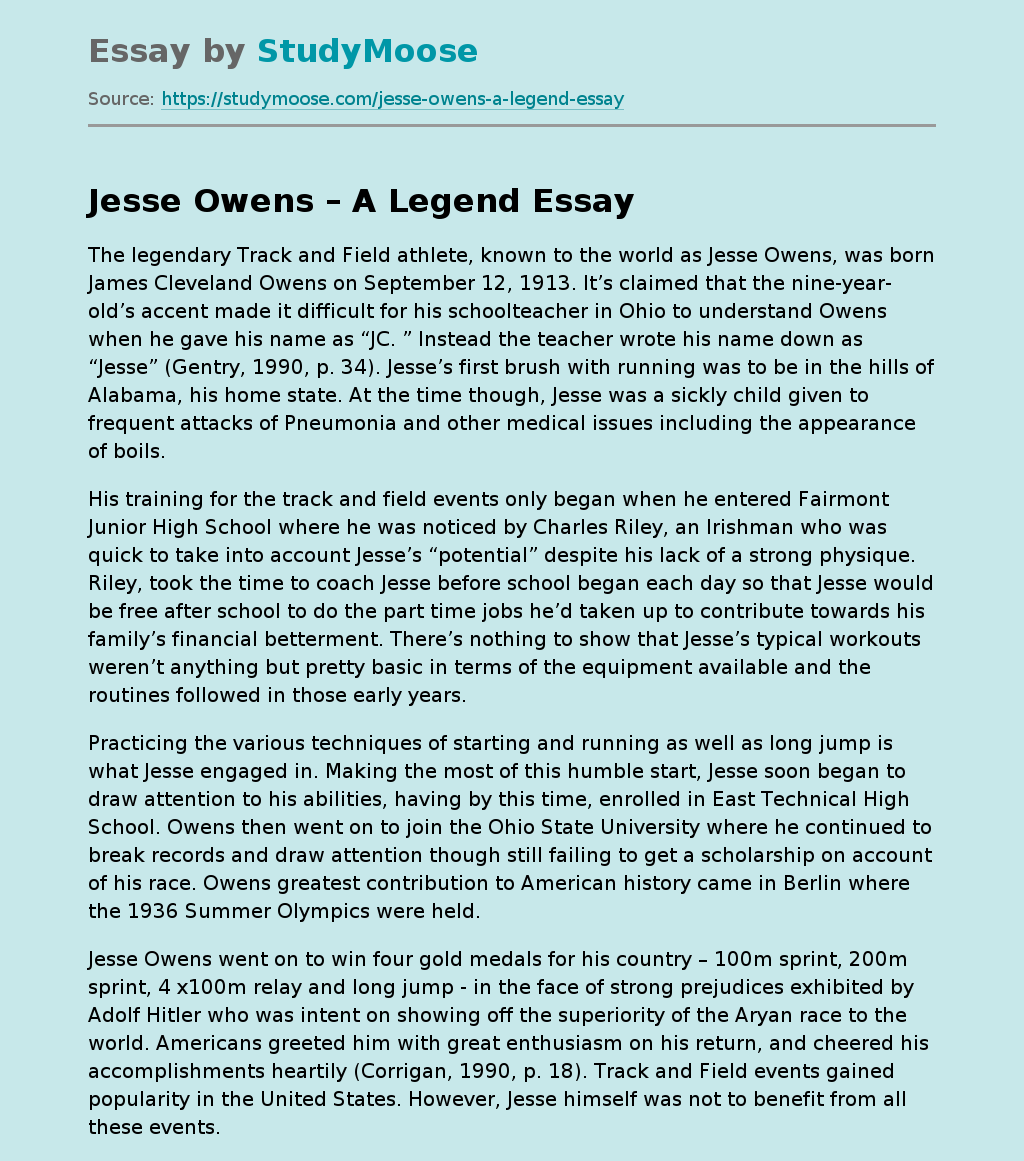