Islam is a religion founded in 7th century Arabia by Prophet Muhammad. Islam is based on five pillars which serve as the foundation of the religion. The first pillar is known as shahda (faith): “Shahada is a declaration of faith and trust that professes that there is only one God (Allah) and that Muhammad is God’s messenger”. This means there is only one God and no one is above him and no other creation can be God or associated with him.

Don't use plagiarized sources. Get your custom essay on
“ Islam: Culture And More ”
Get custom paper
NEW! smart matching with writer

The second pillar of Islam is prayer. People who follow Islam must pray 5 times a day and the time is perceived by the sun’s movement. The third pillar of islam is charity. Muslims are required to voluntarily or mandatorily help others through charity. The fourth pillar of islam is fasting during the month of Ramadan. The fifth pillar of islam is pilgrimage to Mecca. Since its founding, centuries ago, ISlam has dynamically changed the world while still staying true to its foundation.

There are various customs and practices related to islam that are followed by muslims all around the world. Islam also has a huge contribution in the fields of music, art, architecture and festivals.

Islamic art and architecture has astonished the world for centuries. Monuments like taj mahal, dome of rock , a silk art are examples of islamic art. The phrase islamic art doesn’t only refer to religious art or architecture , but also to all forms of art produced in the islamic world or places where islam is/was a dominant religion.

Islamic art is not t a monotone form or theme of art since it spans over 1300 years and comprises of vast geographical diversity. One of the major themes of islamic art is calligraphy. There are various verses of quran written in calligraphy that can be seen in multiple forms of architecture and art. According to Khan academy, “Calligraphy’s omnipresence underscores the value that is placed on language, specifically Arabic” This shows just how powerful calligraphy is since it’s integrated in the main language of Islam. ANother great form of Islamic architecture is the mosque. Mosques can be found all around the world from Indonesia to the United kingdom. Mosque (masjid in arabic) is a place where people gather for prayer. The architecture behind the mosque can vary greatly due to traditions of place and the time it was built in. However, since the common function of a mosque is to serve as a place for prayer, there are some architectural features that can be found in most mosques. All mosques must have a sahn (courtyard), Mihrab (niche), Minaret(tower), Qubba (dome) and furnishings. The courtyard is adjacent to the large prayer halls. In the courtyard one may find a fountain, where ritual cleansing takes place before the prayer. A mihrab is a niche in the wall that shows the direction towards Mecca. All muslims are supposed to pray towards the direction of Mecca. This is extremely important because Prophet Muhammad was born in the city of mecca and this is also where Kaaba (the holiest shrine in Islam) is situated. Minaret is a tower attached to a mosque. This is where the call to prayer is announced. Most mosques have one or multiple domes that possess a symbolic portrayal of the vault of heaven. “The interior decoration of a dome often emphasizes this symbolism, using intricate geometric, stellate, or vegetal motifs to create breathtaking patterns meant to awe and inspire”. This shows how islamic art is so crucial to its architecture. Aside from these big structures, many mosques have decorative furnishings. For example, an expansive calligraphic frieze or a cartouche with a noticeable engraving frequently shows up over the mihrab. By and large the calligraphic engravings are citations from the Qur’an, and regularly incorporate the date of the building’s devotion and the name of the benefactor. Another essential component of mosque improvement are hanging lights. Light is a fundamental component for mosques, since the first and last day by day petitions happen before the sun rises and after the sun sets. Prior to power, mosques were lit up with oil lights. Many such lights hung inside a mosque would make a sparkling exhibition, with delicate light radiating from each, featuring the calligraphy and different enrichments on the lights’ surfaces.

Along with all the accomplishments of Islam, there are a few misconceptions that go along with it. One of the biggest misconceptions is that women belong in the house only. In reality, Islam does not prohibit women from pursuing careers outside of their house. In fact, prophet Muhammad’s wife, Khadija, along with other women, was a scholar. The Quran clearly states, ‘Whoever works righteousness, man or woman, and has faith, verily to him will We give a new life, and life that is good and pure, and We will bestow on such their reward according to the best of their actions’ (Quran, p. 663). Another misconception that goes along with Islam is the idea that Islam promotes violence and terrorism through Jihad ( holy war). In reality Islam rarely authorizes its followers to use violence and that is only in cases of self defense. 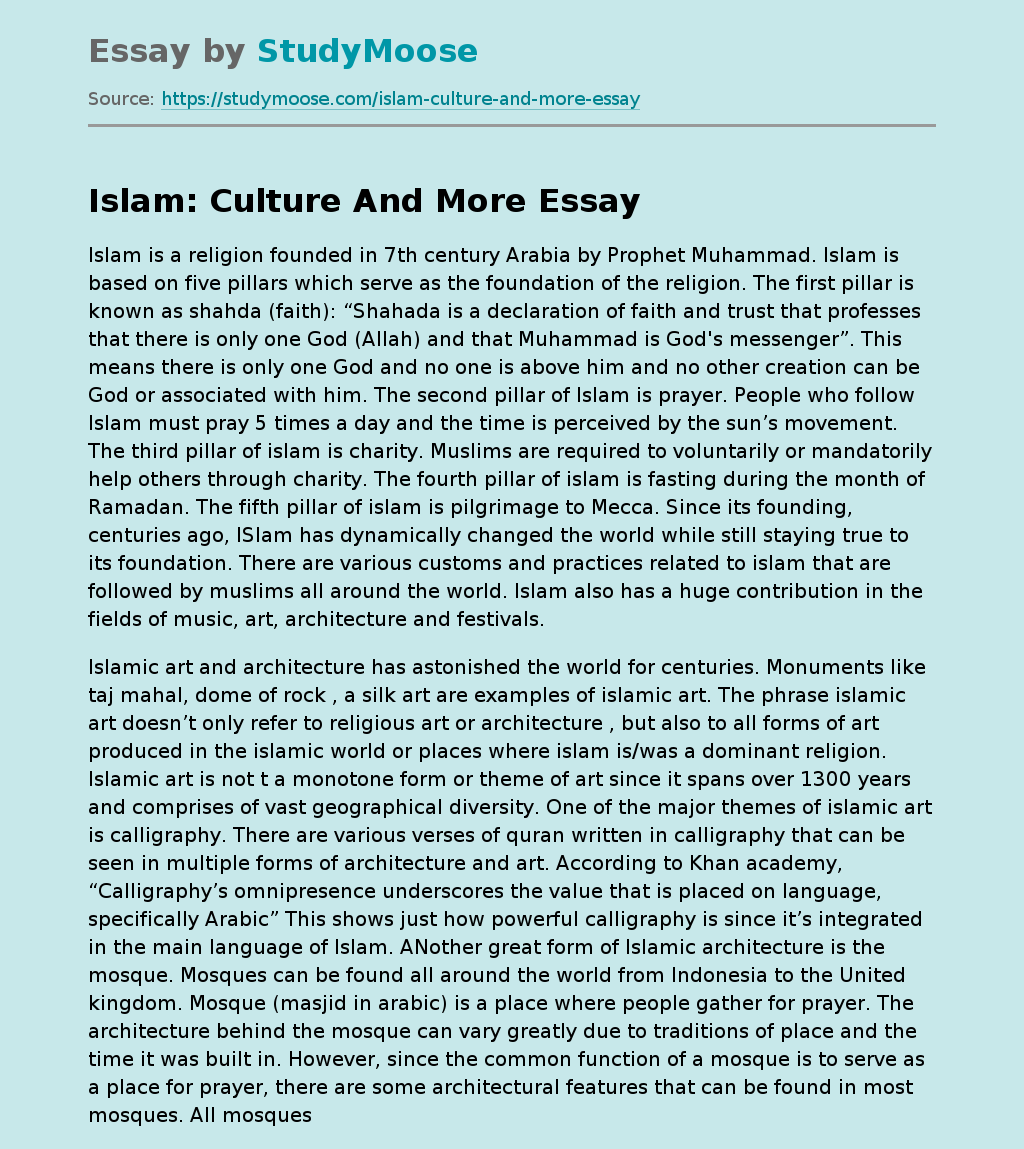