Is school uniform a good idea? What is it good for? These questions are asked time and time again by pupils. In this essay I plan to explore the issue and discuss whether or not it’s a good or bad idea. Teens often complain and criticize about how uncomfortable school uniforms are and how they do not live up to their fashion standards. On the other hand, teachers argue that school uniform keeps students looking smart and the uniform helps identify any unknown person from entering the school, Furthermore students argue that everyone looks the same and the uniform is tedious and boring.

Don't use plagiarized sources.
Get Your Custom Essay on Is School Uniform A Good Idea Just from $13,9/Page

A reason why school uniform is a good idea is it saves your clothes: but you’d like to show off your dear clothes. In my opinion I rather waste a two dollar primark top than 178 prada shirt, but obviously some people feel they would be bulled for not wearing dear clothes this is because in the society we now live in has a high demanad on having the “perfect” fashion look.

On school outings teachers say that it’s easier to identify their students if they are wearing school uniforms, but this takes away the students creativeness, and they are unable to cnver their own style and wear what they feel comfortable in. Although some pupils will try and change their uniform to make them look more unique but teachers quickly catch on to this and demand that we wear what they call the “appropiate uniform”. Teens like to be different and have their own style but by schools demanding that everyone obeys the dress code, students will all look the same.

An argument for school uniform is that if students were to wear what they like the less fortunate pupils would stand out and they would be bullied because they cannot afford the newest clothes, this would cause the bullying rate to go up and lower pupils self esteem and make them feel as if they cannot be themselves in scoiety. But I do think that if pupil were allowed to wear non-uniform the worry to have the latest fashion would in stages, fade away because everyone would get used to wearing normal clothes and then it wouldn’t be such a big thing not to wear uniform. Schools indubitably love uniform; in contrast to this view, students absolutely hate them!

School s think uniform looks smart likewise so do most parents. In addition pupils sometimes do not follow the schools dress code and this makes teachers irate, and sometimes this leads up to pupils getting sent home. In recent years some schools have relaxed and accepted some different styles on the other hand some schools have strict rules that include girls only to wear skirts. I feel that making this demand some girls are being discriminated against because they might not want to wear a skirt because of their religion or they have a medical issue (skin problem). A reason for school uniform is that it makes the school look smart and represents the community.

The usual uniform complies of a shirt, tie and trousers and also a sweatshirt for some people this is very uncomfortable: but this is a major improvement since the 1930’s when the uniform was restricted to a plain blazer and a shirt touched your ankles, and for p.e pupils were reduced to wearing underwear and basic sand shoes. Another good advantage of school uniform is that the big shop competitors like Asda and Tesco etc. Are competing with each other to provide good value uniforms for a better price this is also putting on pressur for the top range shops to reduce their prices to keep up with the cheaper ones.

One disadvantage of school uniform is sometimes after the period of going back to school, the shops discontinue stocking the uniform and it makes it hard for the parents to buy a bigger size that there child has grown too, therefore a lot of pupils come into school not wearing uniform because it doesn’t fit them anymore. Sources say that a student in school uniform is more likely to take school seriously.

Putting on school uniform signals that he/she wants to learn and that they are complying of the rules which you must undertake when you go to work. However some students don’t want to follow rules, forcing them to wear a uniform this only makes them more determined to be rebillious and wear what they want. In conclusion I think school uniform is a bad idea because it has no effect of the outcome at the end of the pupils school years however school uniform makes the school appear more pleasant and also makes the pupils look smart.

Is School Uniform A Good Idea. (2016, Apr 25). Retrieved from https://studymoose.com/is-school-uniform-a-good-idea-essay 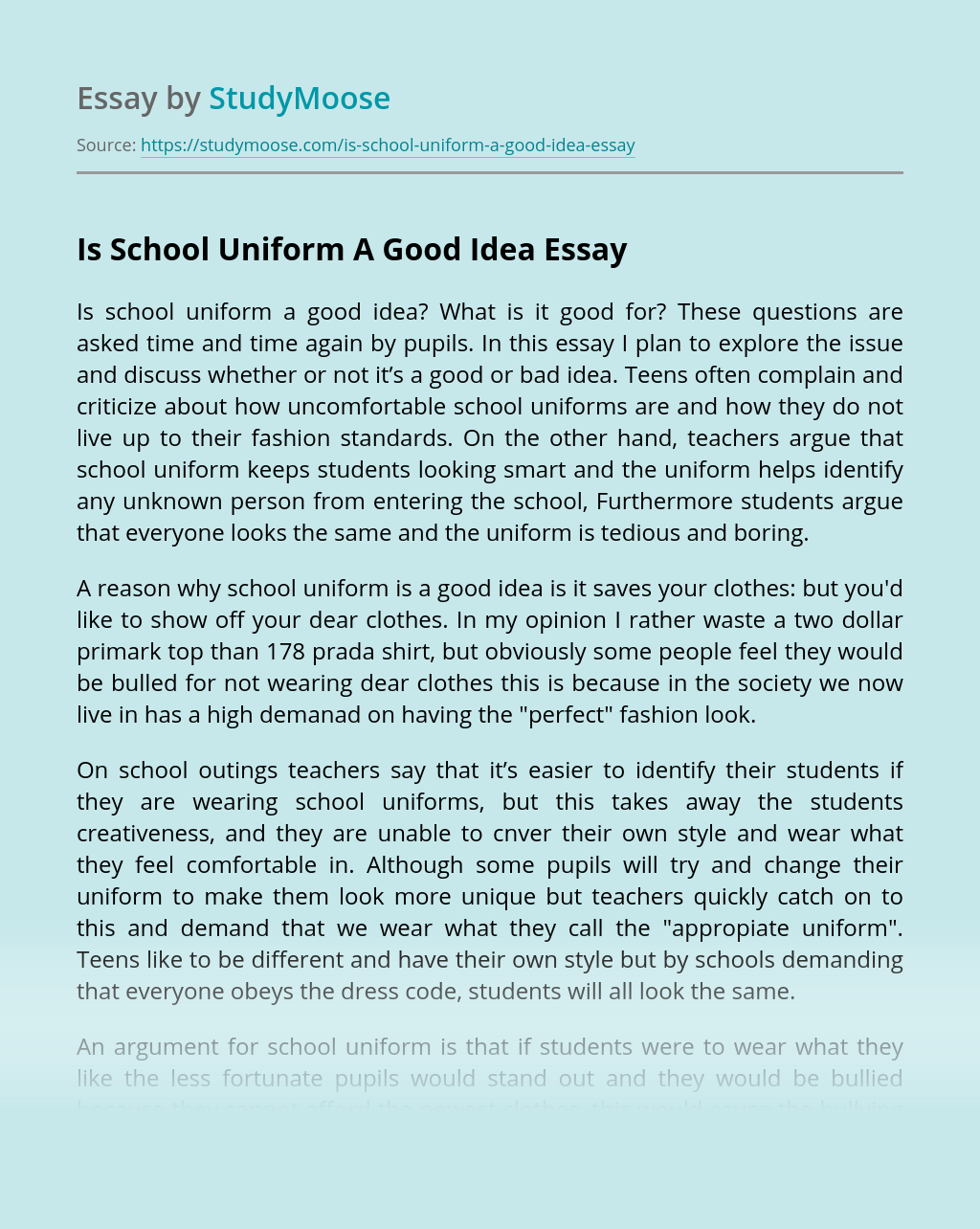 Business Model of H&M vs Lacoste

Customers eat dishes which aren’t prepare at that moment, prepare is based on a long period of time. Eating is an essential need of a human being, but some people give so much importance to it which are maybe called as niche market. These customers won’t be satisfied in a long term if they see... VIEW ESSAY

This paper will describe the importance of creativity, innovation, and design and how they meet organizational objectives by defining, comparing, and contrasting them. Organizational objectives are the road maps that companies use to reach desired results. Creativity, innovation and design are what the road map is comprised of. Creativity is a critical component in just... VIEW ESSAY

View sample
Get Essay
Cities and the Creative Class by: Richard Florida

With the shift from manufacturing to “creative” industries, a new creative age is increasingly becoming a defining aspect of securing a nation’s economic growth. According to Richard Florida, human creativity is now the “decisive source of competitive advantage” and cities can thrive by tapping and harnessing the young, mobile, and talented individuals known as the... VIEW ESSAY

1.1 Creative learning is about how children problem solve, how they think and how they imagine. To allow this we need to provide opportunities for children to explore and to be imaginative in what they do, we need to provide resources that can be transported and manipulated, for example a child may decide to build... VIEW ESSAY

Sir Ken Robinson present about how schools kills creativity in a very interesting way. In other words, he manage to grab people’s attention in all over twenty minutes of the presentation by telling jokes. According to Sir Ken Robinson these days students are educated to be a good workers rather than creators. Sir Ken said... VIEW ESSAY