Honesty is the best policy that is a famous saying said by Benjamin Franklin. Honesty means telling the truth or able or be trusted. According to the saying of honesty is the best policy, a person should be dev and tell the truth always in his/her life while answering any question or conundrum. Honesty is just like a good weapon in life which benefits us through many advantages (Schluter,1993). It can be flourished naturally without any cost. Honesty gives us everything expected in life whereas a single lie may ruin our life by ruining correlations.

Don't use plagiarized sources. Get your custom essay on
“ Is Honesty the Best Policy? ”
Get custom paper
NEW! smart matching with writer

Being a lay person may lose all benefits of being trustworthy in the hearth of our family members, friends, and other close ones. So following the saying of honesty is the best policy in life is good.

Honesty is considered the best tool of success in life and a famous person said it as a foundation of a successful relationship. Without being honest in life, it becomes really difficult to make real and trustworthy friendships with anyone.

People who are generally used to telling truth can be able to build better relationships and thus a better world. Some people who do not have dare of telling truth to their dear ones, generally tell lie and face bad situations of being dishonest. On the other hand, saying truth helps in strengthening our character and makes us strong. So, being honest helps us a lot in many ways all through life. Honesty is the most effective tool for protecting relationships(Shakespeare).

Telling lies just to save the situation can make the condition even worse. Saying truth always helps us to strengthen the character as well as bring confidence within us. There are many bad and good situations in life and I think almost all of us have been felt that telling truth to our dear ones gives us relief and happiness. So, according to this saying, being honest is really being a good human being in life. Honesty is not just about telling the truth. It’s about being real with yourself and others about who you are, what you want. Honesty encourages openness and enables us to develop consistency in how we present the facts. Honesty grinds our perception and allows us to observe everything around us with transparency.

The opposite of honesty is deception — or lying. Lying is equally bad whether you are deceiving others or yourself. When you lie, you delude yourself into believing what you’re saying. You start digging a hypothetical ditch, even if with an infant-sized spoon, that will keep getting bigger over time. You confuse yourself, confuse others, lose credibility, and put yourself in harm. The worst type of lying we practice, in order to deceive, is when we lie to ourselves. We start messing around with our concept of morality, right and wrong, as well as our dreams and desires. Times that I lied in order to do something that I knew was wrong, I could feel it. My inner core warred and rebelled against what I was mentally committing to doing because it was in contrast to who I really am.

When I look back on it, every time I lied (that I can recall) I was trying to excuse or misrepresent my own shortcomings or to compensate for something. I was trying to pursue a sinful desire that would only, at best, produce temporary pleasure. Lies I told were often due to a lack of effort, positive morals or thoughts. Other times, I was convincing myself I wasn’t good enough or able to do something my heart was really set on. Lying or presuming I knew something I didn’t really know was the easy path. This discouraging thought manifested itself in ways that I couldn’t possibly perceive at the time. It set me back by delaying the pursuit of my dreams. It took away my ability to take chances that my heart was willing to take but my mind was blocking me from taking. Despite its temptation, ease of use, and false promises, lying gets us nowhere in the end. We stay right in our own tracks or much worse, go backward.

Honesty and seeking the truth is always the way to go. Honesty engenders confidence, faith, empowers our willpower and represents us in the best way for others to see and witness our example. Honesty improves our vitality. In an honesty experiment conducted by two University of Notre Dame professors, results showed that telling the truth is good for our health:

Telling the truth when tempted to lie can significantly improve a person’s mental and physical health, according to a “Science of Honesty” study.

Respectable, admired behavior is always carried out with honesty. Telling the truth and backing it up with actions show respect for what’s right and esteem for ethical and moral integrity. Honesty is one of the key components of character and one of the most admired traits of any successful, responsible person. Success, for me, is not quantified in terms of dollars, sales, or a number of Facebook followers. Particularly not the latter! I value success in terms of character, self-awareness, honesty, emotional intelligence, and hard work. How we treat ourselves, others, and how we use our talents to improve the lives of others. An emotionally intelligent person is a person of impeccable integrity and honesty; someone who can perceive and recognize the quality of honesty in another. Business transactions and the everyday transactions of human relations must be carried out with a code of trust and honesty or else everything will break down.

There’s no coincidence that perhaps the most respected American in history, President Abraham Lincoln, is often referred to by the moniker, Honest Abe. Lincoln was shrewd, direct, and honest in all of his human relations transactions and dealings. He was fair and just, a lesson he learned as a store clerk in dealing with customers at an early age.

A defining first-hand account of Lincoln comes from Leonard Swett, a close friend of the former President:

“He believed in the great laws of truth, the right discharge of duty, his accountability to God, the ultimate triumph of the right, and the overthrow of wrong.”

Honesty cuts through red tape, distraction, frustration, and indecision. Honesty gets you where you want to go faster because you live how you really feel. You may not always know what you want in your future — whether that’s one month, six months, or two years from now — but your intuition will give you a feel for what is in harmony with your heart.

Honest intentions in speech and action gain the attention and respect of others. These people become the ones that you not only want to influence but be influenced by. The company we keep and surround ourselves with help to define our outlook on life, as well as lift us to places we couldn’t have arrived at entirely by our own efforts.

Essay on Integrity
Cite this page

Is Honesty the Best Policy?. (2020, Oct 17). Retrieved from http://studymoose.com/is-honesty-the-best-policy-essay 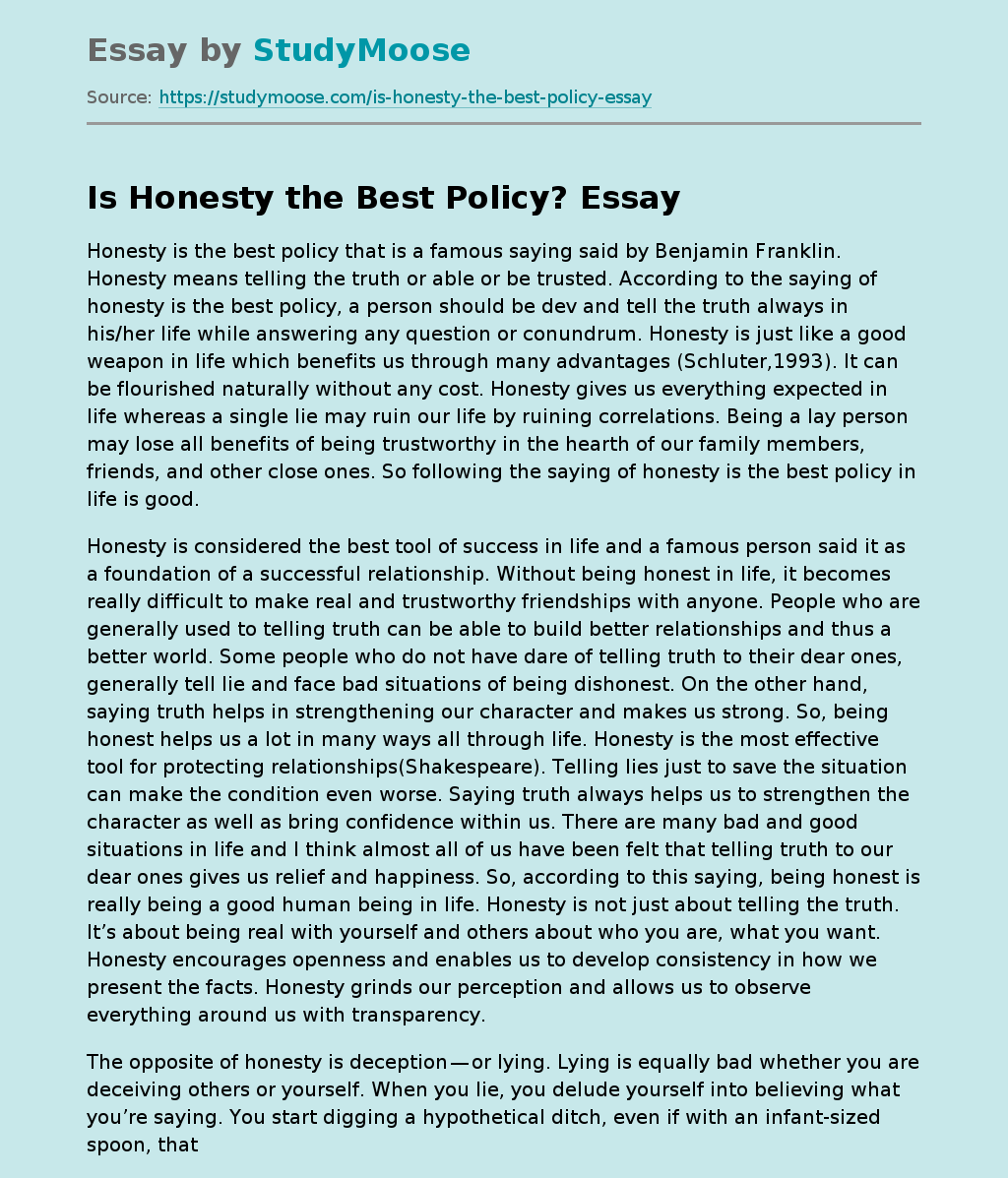