What’s the definition of honesty? The one in Webster’s Dictionary says that it is:

“The quality or fact of being honest; uprightness and fairness; truthfulness, sincerity, or frankness; freedom from deceit or fraud” (“Honesty”). However, each person may define honesty differently. Everybody has his/hers own definition that varies upon his/her beliefs. Some think of it as a main rule of their life, but still tell a little white lie once in a while. Others can not even identify themselves with honesty.

Don't use plagiarized sources. Get your custom essay on
“ Personal Definition of Honesty ”
Get custom paper
NEW! smart matching with writer

The truth is that being honest is extremely hard and not lying at all is impossible.

Everybody lies, even politically significant people responsible for the nation’s well being, who are viewed by the society as icons of trust. People lie on a daily basis, in fact sometimes not realizing that they do it so often; it is second nature. Some of the lies may be innocent. For instance, some may lie not to hurt somebody’s feelings.

A lack of honesty would not be such a big problem, though, if that were the point where it ends.

Some people consider that telling a little white lie doesn’t hurt anything, but still get annoyed and irritated when somebody lies to them. If they expect others to be honest with them why can’t they pay back in the same way? Usually humans lie for personal gain and self-interest. For instance, some may lie because they are ashamed of the things they have done and do not want or are afraid to face the consequences.

A good example here is Bill Clinton, who in 2004 lied about his affair with Monica Lewinsky to both the nation and the grand jury. People hide, ignore and omit the facts. They care less what effect it may have on others. In this case they aren’t just dishonest and selfish but also show a lack of integrity.

On the other hand, people may lie because they want to be a part of group. As Stephen L. Carter writes in his article “The Insufficiency of Honesty”, integrity may be often “a fake honesty” (106). For example, humans lie to impress somebody or put up facades to look better in others` eyes. They agree with other people’s statements, even if those vary from their own beliefs, simply because they want to be accepted.

Furthermore, throughout history people could experience dishonesty from many, if not all U.S. presidents. For instance, “Richard Nixon lied because he was trying to save his presidency, which was imperiled by his misdeeds. Franklin Delano Roosevelt misled the country over things like Lend-Lease in order to advance a policy he thought would save the world, but which he knew would be difficult to sell politically” ( Cannon 57). During World War II in 1944, President Roosevelt lied to the public about his health condition, simply to hide his weakness from opponents. All of that proves that even people, to whom public trust is given, in the hope of better future of the country, aren’t any different from regular people. As Carl M. Cannon writes in his article “Untruth and Consequences” “Presidents lie because they are human” (58).

Moreover, in a contemporary political world, it is difficult to distinguish the truth from a lie. For example, taking under consideration the war in Iraq, people are constantly confused with the news delivered to them. The Republicans say that everything is under control and without a doubt U.S. is winning the war with terrorism. On the other hand, Democrats talk about the unquestionable failure of the American army and government, as well as undisputable chaos it has caused in the Middle East. Those two versions prove that one of the sides is definitely lying. In this case the lack of honesty is very high and lives of U.S. soldiers as well as prosperity of the country might be at stake. Politicians should put aside their personal-interests and do what is right, because the consequences of their dishonesty may be too high to bear.

Even though the definition of honesty here differs from the one in dictionary, many people will agree with it. Everybody knows from the experience how hard it is to go at least a day without telling a lie; it is impossible. All the people are built from the same mud; they all lie. It doesn’t matter who a person is or what he/she does. Some may be more sensitive about it and would rather have a clean conscience, when others will keep lying without thinking twice. But everybody has to remember that the bigger the lie coming out of their mouth, the larger the consequences they will have to face in the future. Because as my mom used to say, a lie has short legs; one can’t go far or gain much by lying, and if so it will be only temporary. 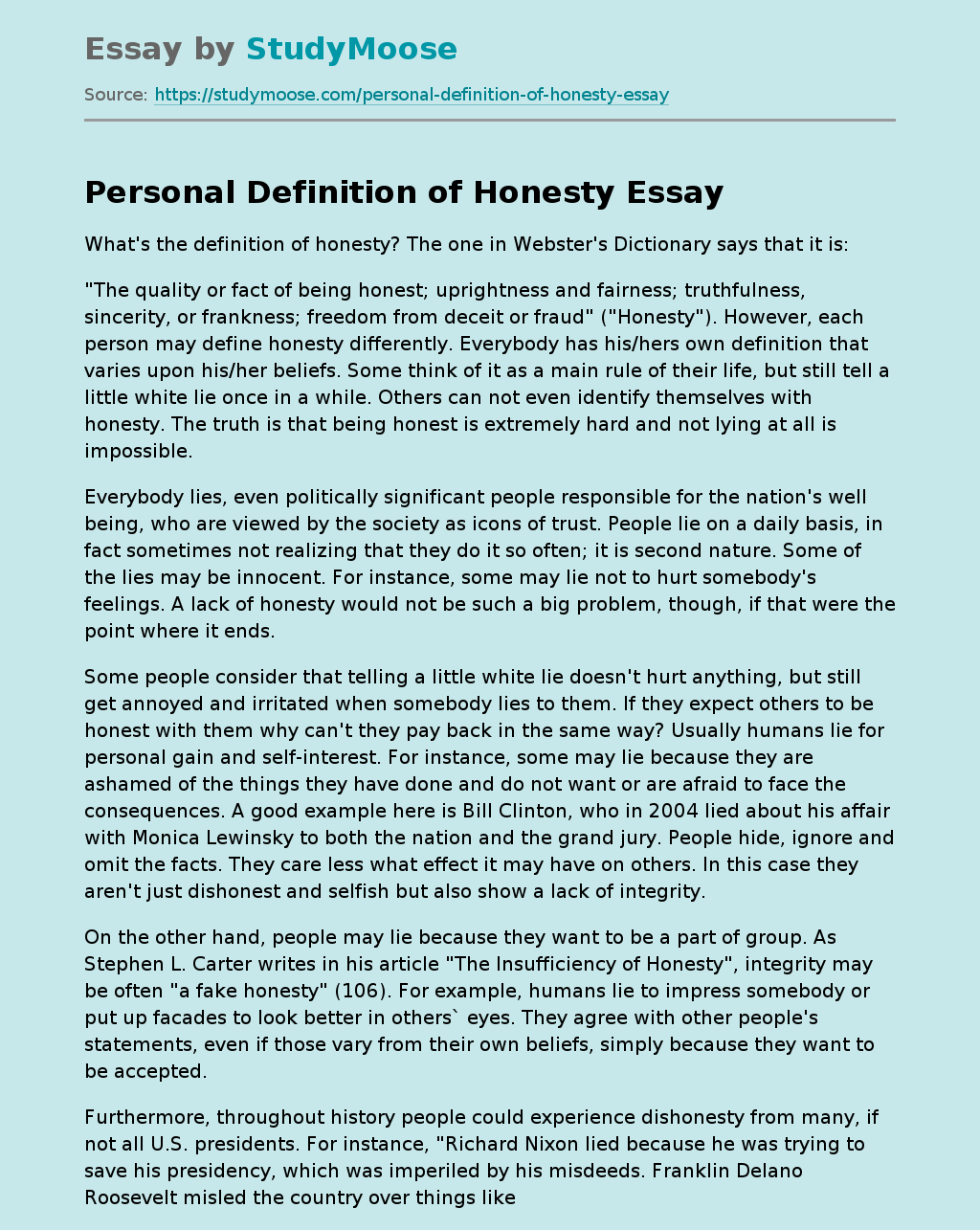