In Stephen Marche’s article “Is Facebook Making Us Lonely?” (2013) Marche suggests that over time, loneliness is becoming more prominent in today’s society. Marche develops his claim by using many published research and scholarly articles. In order to make readers aware of this growing epidemic, Marche’s purpose is to show that by using Facebook people are becoming more isolated. The target audience for this article is Facebook users and people who are interested in joining. Although Marche argues that Facebook is making people lonely, Facebook doesn’t isolate people because of the many networking features such as sending messages and writing on walls.

After reading Marche’s article, I was confused because I disagree with his opinion of Facebook. Marche suggests that Facebook is making people lonely, but I believe that Marche’s correlation between Facebook and loneliness is mere speculation. Marche begs the question “Does the internet make people lonely or are lonely people more attracted to the internet?” (278) I agree with the Australian study “Who Uses Facebook?” The study concludes, “People who have unhappy family relationships in the first place seek companionship through other means, including Facebook.

Marche’s argument is weak because his lack of evidence, despite his research. Marche states “Facebook arrived in the middle of a dramatic increase in the quantity and intensity of human loneliness.” (275) This statement proves that Facebook is not the cause of the increase in loneliness. Some of Marche’s research disproves his correlation between Facebook and loneliness. Moira Burk (graduate student) conducted a study that does not support the assertion that Facebook creates loneliness.

Is Facebook Making Us Lonely. (2016, Apr 02). Retrieved from http://studymoose.com/is-facebook-making-us-lonely-essay 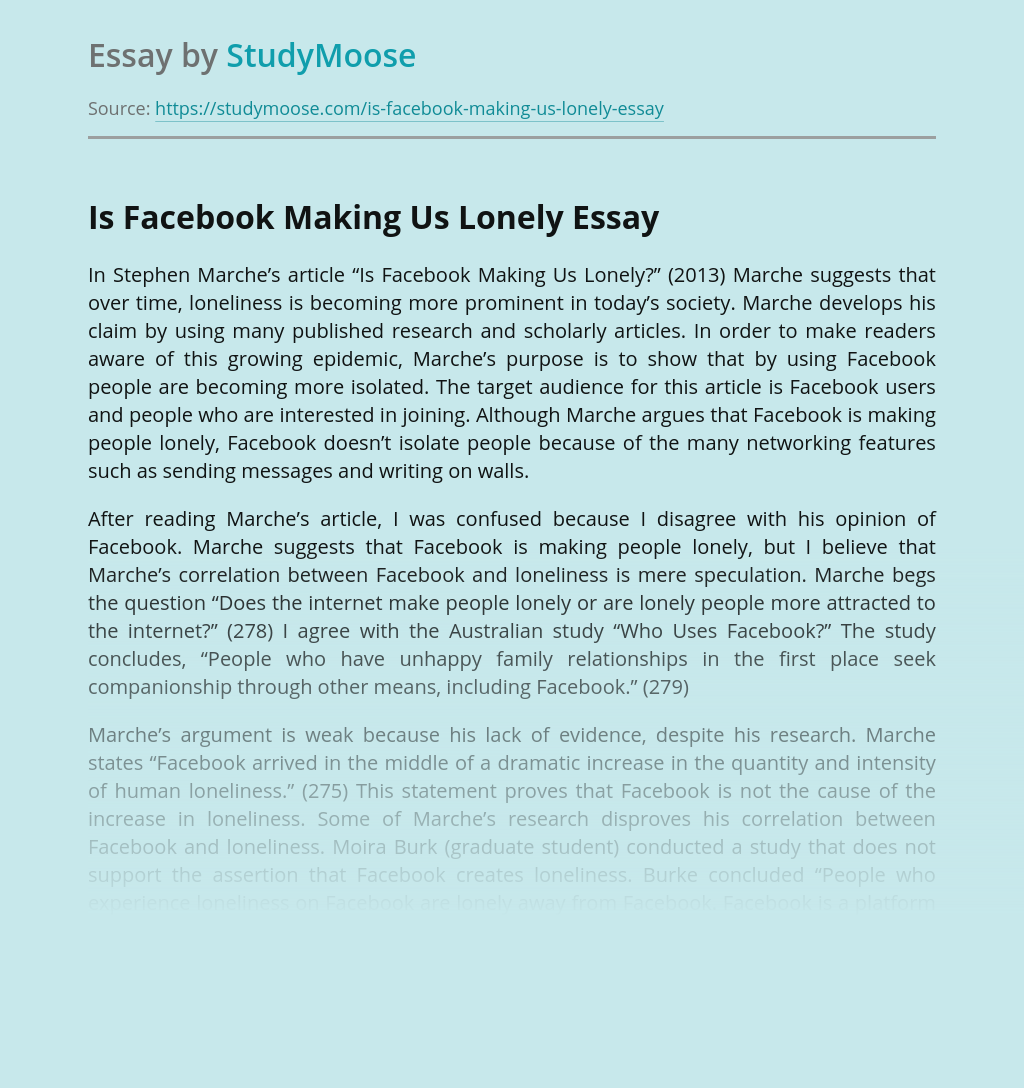 Don’t waste time
Get a verified writer to help you with Is Facebook Making Us Lonely
Hire verified writer
$35.80 for a 2-page paper
Stay Safe, Stay Original