Iphone vs Androind Compare and Contrast

Over the last decade, electronic-based companies such as Samsung and Apple have collaborated with cellular-phone carriers, and have studied the average consumer to find endless ways to improve the cellular phone. As a result, the smart phone was born. With their ability to provide users with instant access to communication, entertainment, Internet access, calendar, news, social media, and much more, the smart phone revolutionized and shifted the path of modern technology. In 2006, Apple began this revolution with their release of the iPhone.

Don't use plagiarized sources. Get your custom essay on
“ Iphone vs Androind Compare and Contrast ”
Get custom paper
NEW! smart matching with writer

Being the first proper smart phone, many other companies attempted to mimic the unbeatable features and technology that Apple had included with the iPhone. Though many had failed in doing so, Google managed to keep up with the iPhone with their Android software. Soon enough, Google’s Android software became the dominant smart phone based software for smart phones not manufactured by Apple. Because of this, Android phones had become just as popular as iPhones. This paper will explore the similarities and differences between both Apple’s iPhone and Google’s Android.

One major similarity between the iPhone and Android phones is their shape. For example, all models of the iPhone have been similar in shape, which can be noted in their rectangular shape and rounded corners. This exact shape can also be seen in many of the Android phones, such as the Samsung Galaxy and HTC Evo. iPhones and Android phones have also been noted for their large touch screens occupying the majority of the front space of the phone, and their job in navigation in place of traditional buttons seen on non-smart phones.

Though the trend of this rectangular shape, rounded corners, and large screen has lead to many disputes regarding who had originally designed the structure, manufacturers continue to use this as the basic structure for their smart phones. Though the iPhone and Android appear to be very similar, they have more differences than they do similarities. For example, because of Android’s alliance of over thirty phone manufacturers, there are currently seventy-seven different models of Android phones.

However, because of the act that Apple refuses to allow other manufacturers to use the iPhone’s IOS software, there are only six models of the iPhone. Differences in appearance are evident as well. For example, higher-end Android phones have been noted for their screens that are much larger than that of the iPhone. However, this limits the screen’s resolution, which is much greater on the iPhone for this very reason. Another similarity between the iPhone and Android are their features. For example, both include a high-resolution camera and MP3 player.

In terms of connectivity, they both allow 3G, 4G, and Wi-Fi connection. Like all modern smart phones, they are both based on very similar downloadable applications, and both include a very similar app store. Like the iPhone, the Android also includes a similar notification center, allowing users to view a log of missed calls, text messages, and other notifications from apps. As stated prior, iPhone and Android share many of the same applications, and both display similarities in their app stores. However, the systems of apps for both types of phone are almost entirely different.

For example, the apps on the iPhone are of higher quality than that of the Android, and there is a much greater selection. However, Android phones allow users to download applications from third party sources, and the Android app store is much less strict to developers than that of the iPhone. Aside from applications, the software of both smart phones display differences as well. For example, the iPhone is known for its simplicity and user-friendliness, while the Android is known for allowing users to customize everything down to the theme of the keyboard.

In conclusion, while the iPhone and Android appear to be very similar at first glance, it is evident that they have more differences then they do similarities. Because of this, both the iPhone and the Android typically tend to attract different groups of people based on what they believe should be in a smart phone, whether they prefer the iPhone’s simplicity and high quality applications, or the Android’s customizability and larger variety of apps.

Iphone vs Androind Compare and Contrast. (2017, Feb 02). Retrieved from https://studymoose.com/iphone-vs-androind-compare-and-contrast-essay 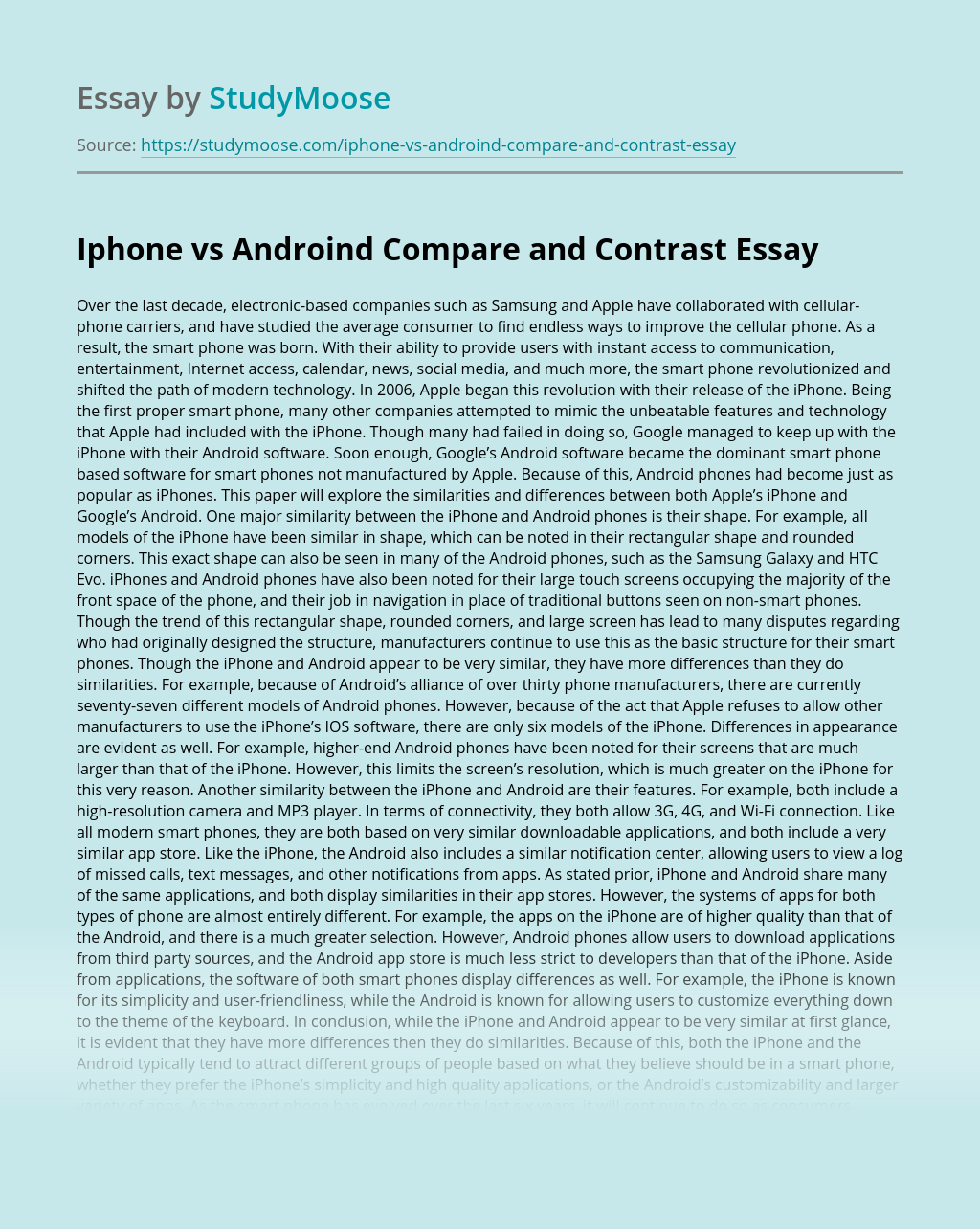