CASE: Accounting for the iPhone at Apple Inc.

The non-GAAP numbers of Apple Inc. reflect its economics better. Because, in the existing method of accounting, revenue and cost of goods sold are spread over the lifetime of the product (expected 24-months), while the costs incurred for engineering, sales, marketing and warranty are recorded immediately. This accurate recording of expenses while recognizing only a part of the cost of goods sold thus showed reduced margins. While this did not affect the cash flow of the business, it affected the periodic profits that the company was reflecting which was just a fraction of the actual profits that the company made.

Don't use plagiarized sources. Get your custom essay on
“ CASE: Accounting for the iPhone at Apple Inc. ”
Get custom paper
NEW! smart matching with writer

As these deferred revenues were mounting with increased sales turnover, the differences in actual profits for the period and reported profits (one quarter at a time, due to subscription accounting) were mounting too.

Given that its sales were exponential, these small fractions of deferred revenue didn’t sum up at the same rate as the sales, which would have otherwise given Apple Inc an edge in the average investor’s priorities.

This affected the average investor since he was unable to see the entire profits that the company was making and hence appreciate and predict its actual performance in the future. He was unable to evaluate effectively the holistic performance of the company. Having accurate information about Apple where Apple recognized its revenues immediately upon sale, its growth would have been visible, stock prices would have gone up dramatically in conjunction with the rise in sales.

For Apple Inc., it would matter positively if FASB changed the rules of revenue recognition for smartphones.

Although phones are not intended to be the primary goods sold for Apple (Mac is), unlike what it expected, the phone sales were on the rise and the company found that downloading programs and apps was very high by phone customers than Mac. This was largely because of the free upgrades given to iPhone customers. But the fact that about 30% of the App store revenue was from the sale of an iPhone app and the developer received 70%1, shows the rising revenues from iPhones in relation to other products of the firm. Phone revenues thus were showing significant impact on the company’s books of accounts. In this case of subscription accounting, Apple Inc.’s 4th Quarter results of 2008 showed a non-GAAP adjustment of ~$2 billion. The cost of providing unspecified additional software products and upgrades was not considered for this.

The Net Income thus computed showed a final figure which was ~115% ($2.4 B over $1.1 B) mark up on the Net Income as per subscription accounting. This is too high a margin to ignore for any company. Therefore, with increasing complexity of voluminous sales in the cell phone space, not recognizing revenues (and hence performance) immediately, placed the company in a disadvantaged position in comparison with their non-U.S. counterparts, where IFRS allowed subjective measures to be used by companies. A marginal percentage of revenue was allowed to be deferred for future recognition, which was for any software updates made in future. So, in order to not be disadvantaged by different reporting standards, Apple would gain competitive edge if FASB changes the rules of revenue recognition for smart phones. Apple should hence advocate it.

CASE: Accounting for the iPhone at Apple Inc.. (2016, Apr 20). Retrieved from https://studymoose.com/case-accounting-for-the-iphone-at-apple-inc-essay 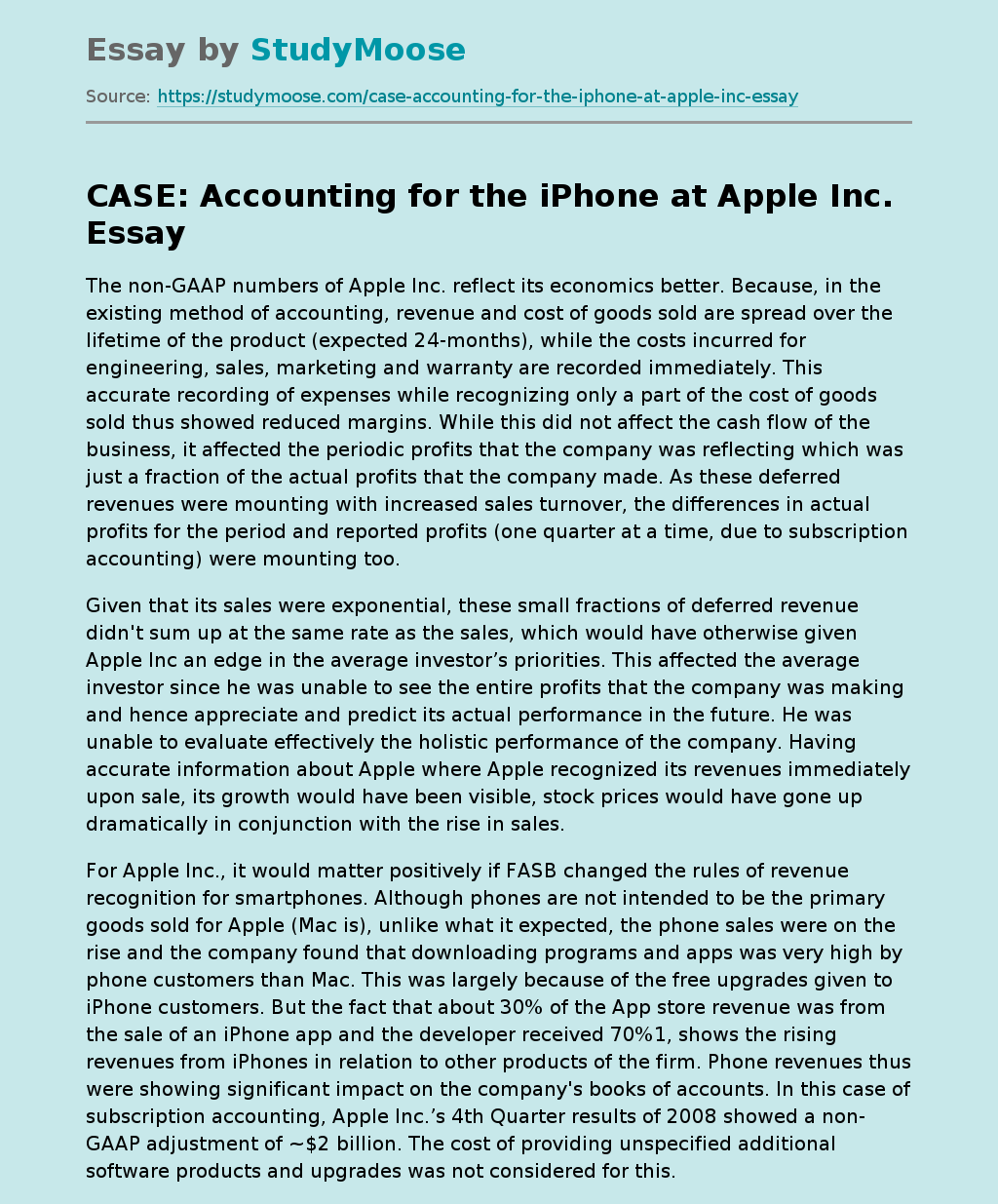