Who makes the Apple iPhone?

1. What are the benefits to Apple of outsourcing the assembly of the iPhone to foreign countries, and particularly China? What are the potential costs and risks to China? The benefits to Apple of outsourcing to foreign countries is that labor costs are sometimes lower there, especially in China. Moreover, Chinese subcontractors are able to respond very quickly to requests from Apple and it is much easier to hire engineers over there than in the United States. Besides, many factories in China provide components for the iPhone, that is near, which takes fewer time.

Don't use plagiarized sources. Get your custom essay on
“ Who makes the Apple iPhone? ”
Get custom paper
NEW! smart matching with writer

On the other hand a potential risk for Apple could be that the subcontractors could use the information they have about the parts they make for Apple. They could sell the information or the parts to other companies. Another thing is that in China the working conditions are poor, they could be charged for that later. Moreover, they have to pay more, because of shipping the parts from all over the world to China.

2. In addition to Apple, who else benefits from Apple’s decision to outsource assembly to China? Who are the potential losers here? The employers and employees of the hired factories in China benefit from Apple’s decision to outsource, because now more jobs are available for them. The potential losers here are people in the United States, because they lose jobs because Apple is outsourcing to China.

4. On balance, do you think that the kind of outsourcing undertaken by Apple is a good thing or a bad thing for the American economy? Explain your reasoning? I do not think that outsourcing undertaken by Apple is a good thing for the American economy, because they provide jobs to foreign people, while instead they could have offered these jobs to Americans. There is a recession these days and a lot of people are seeking for a job, so Apple could make a difference. I totally understand that some countries specialize, for example in the memory, chip sets and so on, but I do think that more things could be done in the United States.

Who makes the Apple iPhone?. (2016, May 13). Retrieved from https://studymoose.com/who-makes-the-apple-iphone-essay 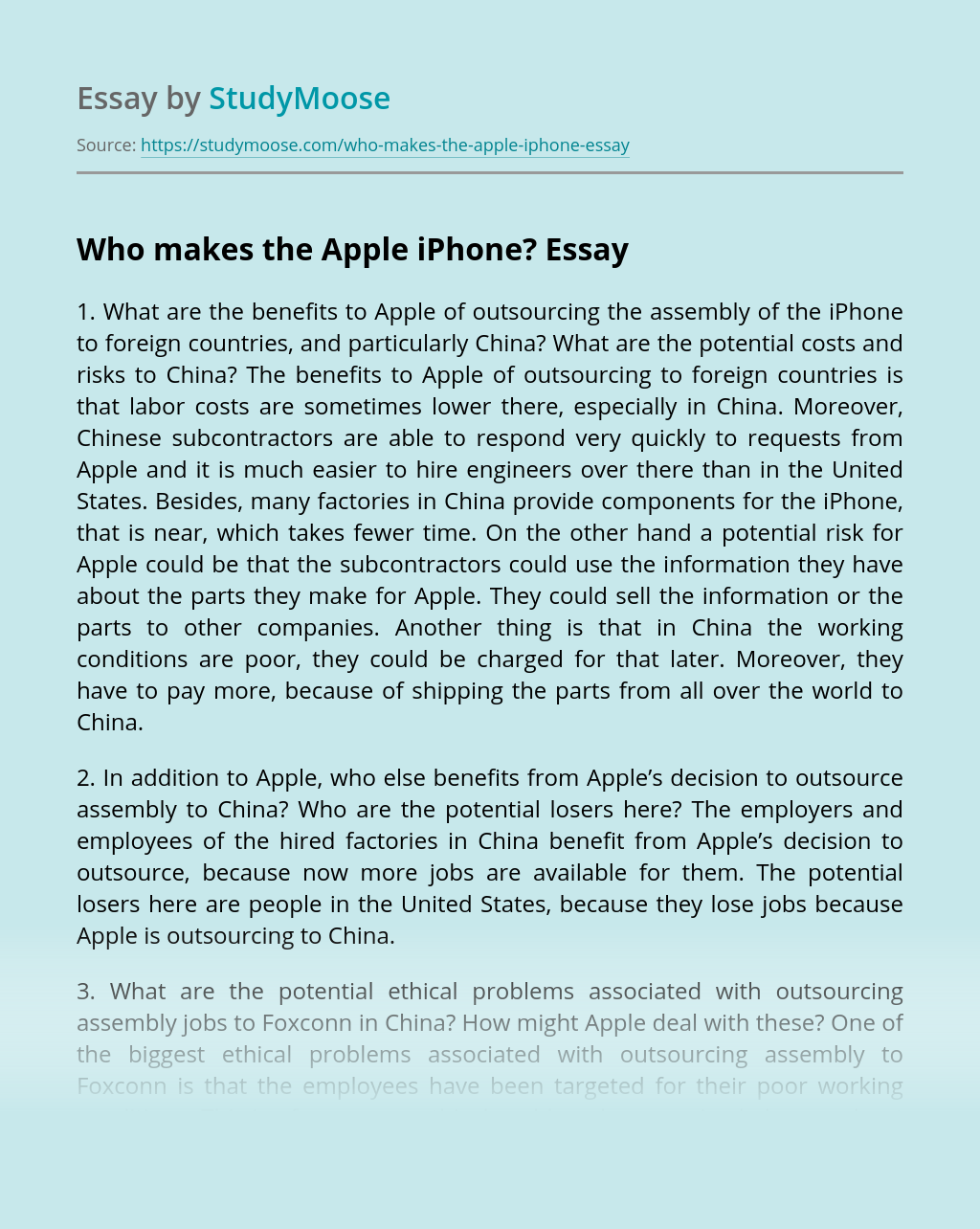